Water 4 Wellness...and a Gesture of Goodwill

Twenty dollars doesn’t go far in the 2020s, but two University of Iowa entrepreneurs are turning that original investment into a substantial donation to the Stead Family Children’s Hospital.

Seniors Gratt Reed and Peyton Haack are enrolled in the popular entrepreneurial finance course taught by Bob Walker in the Iowa John Pappajohn Entrepreneurial Center. The syllabus requires a six-week project called $20 Startup where three randomly selected classmates chip in $5 apiece, Walker adds $5, and off they go to build a business. Reed and Haack are in different sections of the course, but the roommates and teammates on the Big Ten champion Hawkeye men’s track and field team, shared the baton to begin an undertaking called Water 4 Wellness.

The pair drove to Walmart, purchased a 40-pack of water (for a cost of around $4), and while decked out in Iowa track and field polos, University of Iowa Hospitals and Clinics hat, and a backpack full of plastic bottles, handed water to football fans who were enjoying pregame tailgates outside Kinnick Stadium. The only request was a $1 donation per bottle that would be given to the Stead Family Children’s Hospital. What occurred in the next half hour opened their eyes.

“The initial thought was, well we do The Wave, which is a pivotal part of Iowa and especially Iowa football,” Haack said. “The children’s hospital is a special thing for our campus community in general. Let’s walk around and do tailgate-to-tailgate fundraising and see what happens.”

After 30 minutes of what they called “proof of concept” during the season-opening football game against Indiana on Sept. 4, they peeked into the cash box and saw more than $1,000. Generous Hawkeye fans consistently chipped in much more than the requested $1, some doing so without asking for water in return. 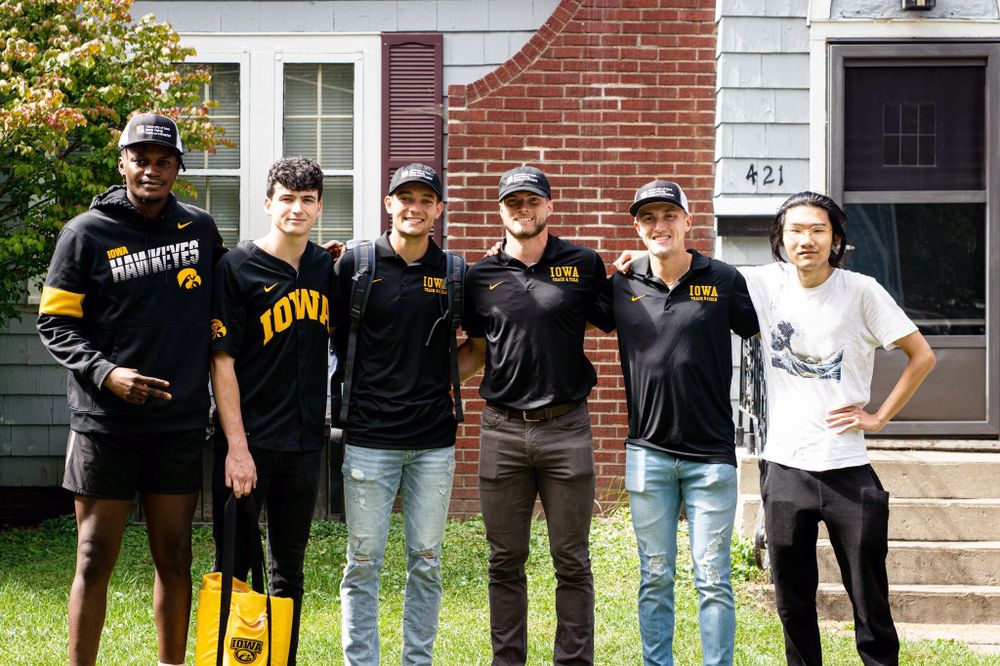 “When you hear the idea of starting with $20, my mind was kind of, well, I probably won’t be able to do a lot with that,” Reed said. “Props to Peyton for coming up with the idea; now we realize you can go a long way on $20.”

For the two students, the adage of “If you love what you do, you will never work a day in your life” holds true. Haack and Reed accelerate on the track as well as in the classroom. Haack, from Westfield, Indiana, is the defending Big Ten champion in the heptahlon, where he finished as a second team All-American. Reed, from Atlantic, Iowa, was runner-up in the Big Ten in the 60-meter hurdles and was a second team All-American after running a leg on the Hawkeyes’ 4×100-meter relay.

“It doesn’t feel like we are giving an hour of our time, it feels like we are gaining an hour,” Haack said of spreading good will on home football Saturdays. “We’re getting something back from it, it is not a sacrifice to us.”

“We’re in it to give back to the greater good,” Reed said. “The impact we’re able to make off those couple hours (a weekend) is great. A lot of things aren’t about money; doing things out of the goodness of your heart makes you feel like you’re making an impact. That’s what is in it for us.”

The sixth and final week of the $20 Challenge ended with Saturday’s game against Penn State. After the first three home games, Water 4 Wellness had made nearly $3,000. Reed and Haack want to extend the assignment and may start a student organization to assure that the fundraiser continues after they graduate. Currently, they are working to clear a hurdle of securing a sales license.

“We thought about carrying on to the rest of the football games depending on this situation,” Reed said.

Haack is majoring in entrepreneurial management but is undecided on life after the University of Iowa.

“I love leadership, I love development and progression, and whether that is business or personal, the main thing is I want to lead people and be someone who can help others grow in their career,” he said.

Reed is majoring in enterprise leadership and would like to become a financial planner.

“I have a passion for finance in general and figuring out strategies to help people reach whatever their financial goals might be,” he said. “I have passions for educating and helping people.”

The success of Water 4 Wellness has not gone unnoticed to students in the entrepreneurial finance classes. Other groups have rallied behind the Water 4 Wellness cause and donated to Stead Family Children’s Hospital with proceeds from their $20 Challenge projects as well. Tyler Linderbaum, center on the University of Iowa football team, is in the entrepreneurial finance class and has a goal of donating $15,000 in “Baum Squad” clothing sales to the children’s hospital.

“It’s nice to see how the generosity behind our idea sparked what other people have decided to do,” Reed said. “In the end, it’s all going for the greater good, which is for the kids.”