IOWA CITY, Iowa – The University of Iowa women’s golf program has signed four preps who will join the Hawkeyes during the fall of 2022, it was announced Tuesday by head coach Megan Menzel.

“We are excited about the addition of our 2022 class,” said Menzel. “Shannyn, Kaitlyn, Riley and Madi bring a lot of success and good momentum into our program. They have all had success at the high school, regional and national level and are great student-athletes. They are all excited to be Hawkeyes and we are looking forward to them joining our roster next fall.” 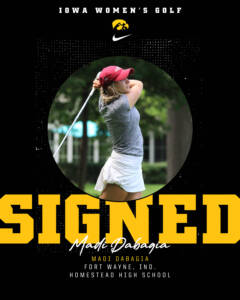 Why Iowa?
“On my visit to the University of Iowa, it was immediately apparent that the coaches, team, and facilities were something special, which made the decision to commit simple. I cannot wait to call Iowa my home.”

Menzel on Dabagia:
“Madi is a late addition to our class and a pleasant surprise. She is a solid athlete and a player that has had a strong 2021. She won her first AJGA this past July and has continued posting solid scores at or below par. She is a strong ball striker with great speed and will transfer well to the collegiate level. This past summer Madi won the Indiana Junior Girls Championship by eight shots. She continues to rise in the junior ranks, and I believe her best golf is in front of her. We are excited to have Madi join our roster next fall.” 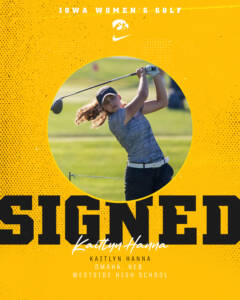 Why Iowa?
“I chose the University of Iowa because I fell in love with the campus and culture. I was looking for a special golf program that offered it all to their student-athletes… academics, facilities, campus support and top-notch coaches. The University of Iowa is a great fit for me now; and will make me a better person and golfer in the future.”

Menzel on Hanna:
“Kaitlyn is an outstanding two-sport athlete at Omaha Westside and I loved hearing her enthusiasm and drive to compete in both sports throughout the recruiting process. She had a strong summer and added a lot of national competition to her playing schedule and the recently crowned Nebraska Player of the Year and newly coined Hawkeye held her own. She is a competitor and I enjoyed watching her come back and win at the Midwest Junior at Glen Oaks this past summer. She brings a great work ethic and solid overall game to the next level. She will be a great addition to our team next year and will be a very solid leader for the team on and off the course.” 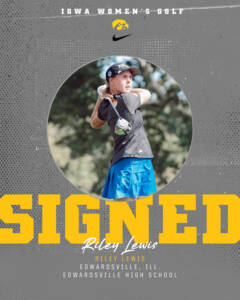 Menzel on Lewis:
“Riley is an up-and-coming player and we are pleased that she fell in love with Iowa. I received a call about her from her uncle, former SMU coach Jason Enloe, a couple years ago and we hit it off.
She is a talented junior player who loves the game and loves to compete. We are so excited for her win at the Golfweek International Junior where she posted her career low 68. There is a lot more of this outstanding golf ahead for Riley and we are thrilled for her to be a Hawkeye.” 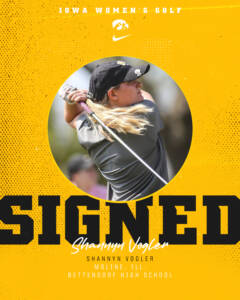 Why Iowa?
“For college golf, I was looking for a place where I could improve my game, but also have a great team experience, both of which I can’t wait to experience at the University of Iowa.”

Menzel on Vogler:
“We are thrilled to have the 2021 Iowa State High School champion on our team next year. Shannyn played for coach Furne at Bettendorf High School and has posted many solid rounds as a junior player, and we are looking forward to her solid play joining our roster next fall. She is a steady player who has strong ball striking skills and will bring a great competitive attitude to our team.

“Her home course is Pinnacle Country Club in Davenport, where our alum, Erin Streick, is the head professional. Shannyn is unique story, her grandfather, Terry Vogler, has coached her and he has a done a great job developing her into a very strong player.”