IOWA CITY, Iowa — The University of Iowa track and field team kicks off its 2021-22 indoor campaign this Saturday, hosting the Jimmy Grant Invitational. The meet begins at 10 a.m. (CT) with throwing events.

A season ago marked one of the best indoor seasons in school history. The Hawkeye women finished third at the Big Ten indoor meet, tying the highest finish in program history.

Senior Mallory King returns for the Iowa women after earning second-team All-America honors in the 800 meters last indoor season after finishing 11th at the NCAA meet. Sophomore Paige Magee is also back after capturing a Big Ten title in the 60-meter hurdles in her freshman season.

The Hawkeyes return six of their eight Big Ten medalists from last season’s third-place indoor team, and 15-of-17 top-eight finishers.

“We believe this is the deepest women’s team across all event areas we’ve had since I’ve been the head coach of the program,” Iowa Director of Track and Field Joey Woody said. “We return a Big Ten Champion, multiple Big Ten medalists and point scorers and a great group of young athletes who will be immediate contributors to our total team effort at the Big Ten Championships. We have a team that will be fighting for another top-three performance and shooting for the Big Ten title if everything falls into place as we progress through the season. The key is to stay healthy and continue to develop our athletes throughout the season. This opening weekend will be a great indicator of where we are at.” 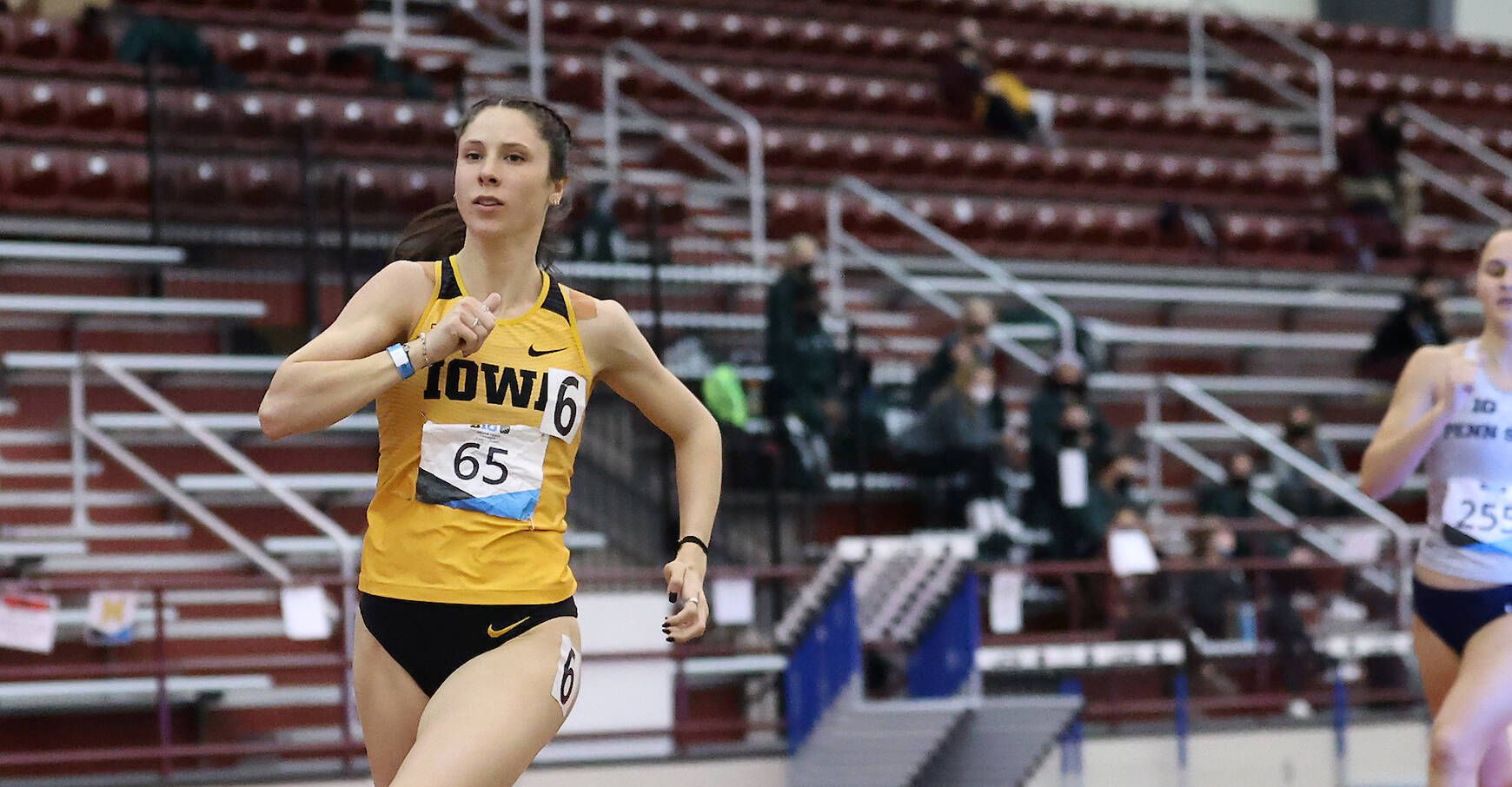 “Our women’s mid-distance group is really talented and that starts with the veteran presence that Mallory King provides. As a two-time All-American, Mallory has set the bar incredibly high, and I am thrilled to see her attack her final season. Clare Pitcher had a phenomenal freshman season finishing third in the Big Ten indoor 600 meters, and she is ready to become a player at 800 meters. She’s also developing into a great leader and someone our team can count on to compete at an elite level.

“Another returner to watch is sophomore Alli Bookin-Nosbisch, who is on the verge of a big breakthrough season and should be in the mix to make some Big Ten finals this year. The wild card in this group is senior Logan Akason who has really turned the corner and has shown flashes of excellence. She’s going to be chasing PR’s all season.” 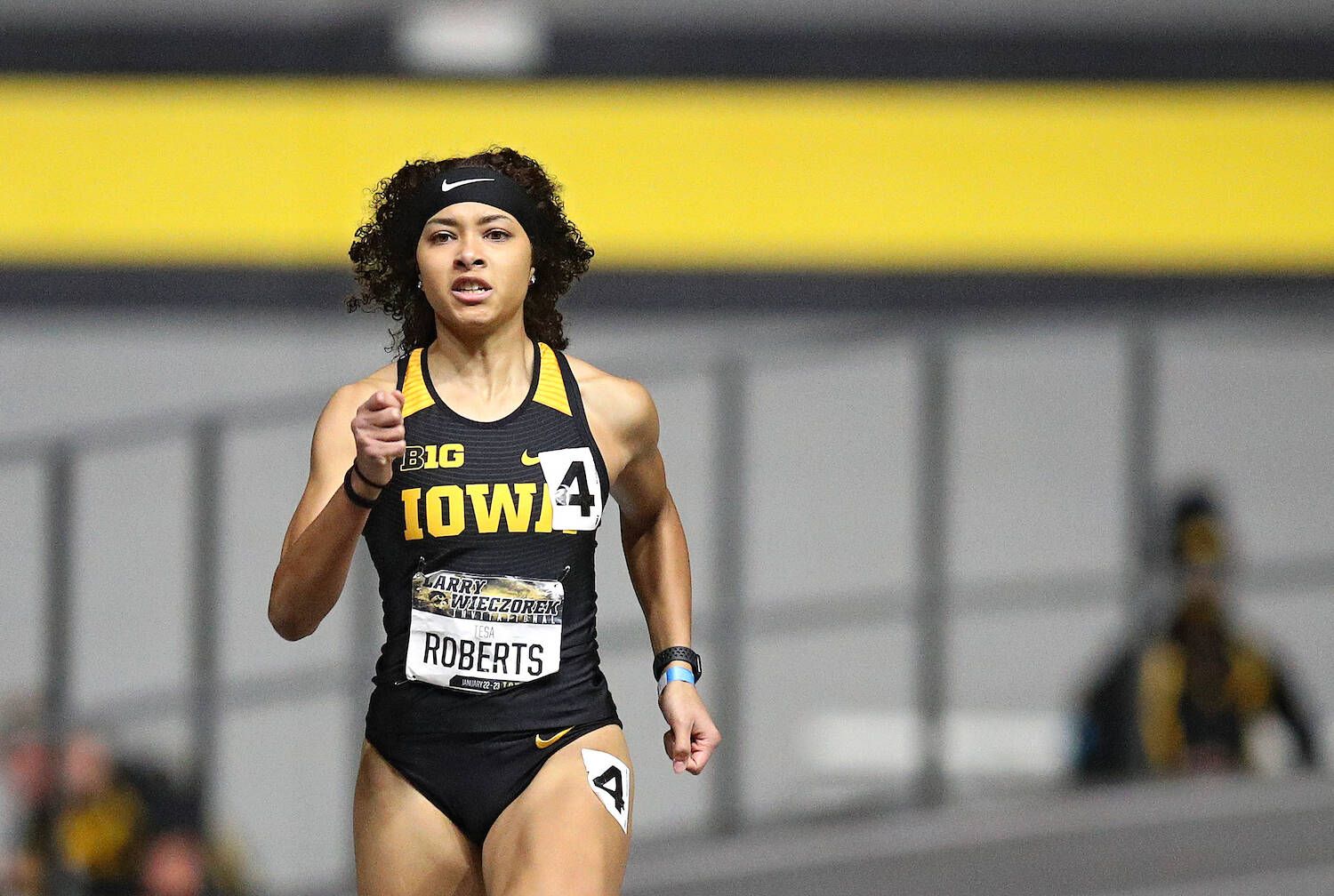 “This women’s long sprints group has been really fun to work with this fall. We are very young, but the talent is unmistakable.

“Sophomore Tesa Roberts was a Big Ten finalist as a freshman, and I expect her to take the next step in her development and make a bigger impact at the conference and national level.

“We also have a pair of freshmen, Sarah Bova and Chloe Larsen, who have made huge progress in the last few months. They were extremely underrated coming out of high school and will impress Hawkeye fans with how quickly they impact the program.

“Coming from more of a mid-distance background, lookout for freshmen Jaiden Itson and Laney Fitzpatrick. They are going to have a big impact on how good our 4×400-meter relay is by the end of the year, and I can see them doing special things in the 600 meters.” 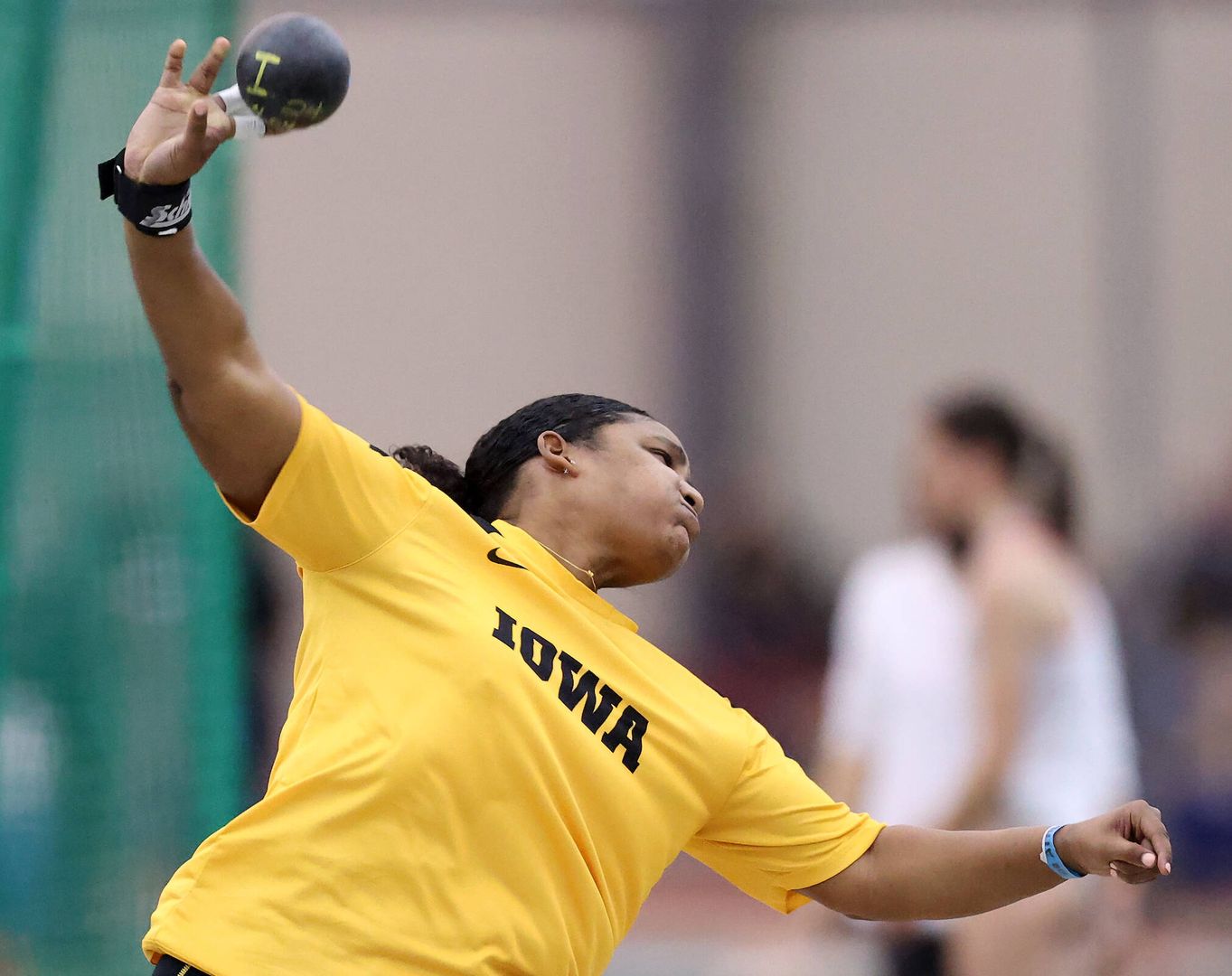 “The throws squad has been putting in some serious work this fall, not only in terms of physical preparation, but changes technically as well. Our goal for the season is to see improvement from those changes and to see how they carry over to bigger and more consistent results, especially when it matters most. They have embraced the path we are on and this will allow us to have the success we want as a team. We have a lot of student-athletes that will contend at the Big Ten level.

“Senior Nia Britt is the top returning scorer. Her shot put is progressing well and improvements in the weight throw will put her in a good spot to contend at the conference level.

“Senior Amanda Howe is the top returning weight thrower and her training this fall projects well for this upcoming season.  We are really looking to her to lead that group.

“Junior Kat Moody is set up for a continuation of her breakout outdoor campaign, especially in the shot put.

“Junior Nicole Berry has been a great addition to the team, and we look forward to seeing her in the mix this year.

“The rest of the ladies are progressing extremely well, and we know we will have some good surprises throughout the year from them.” 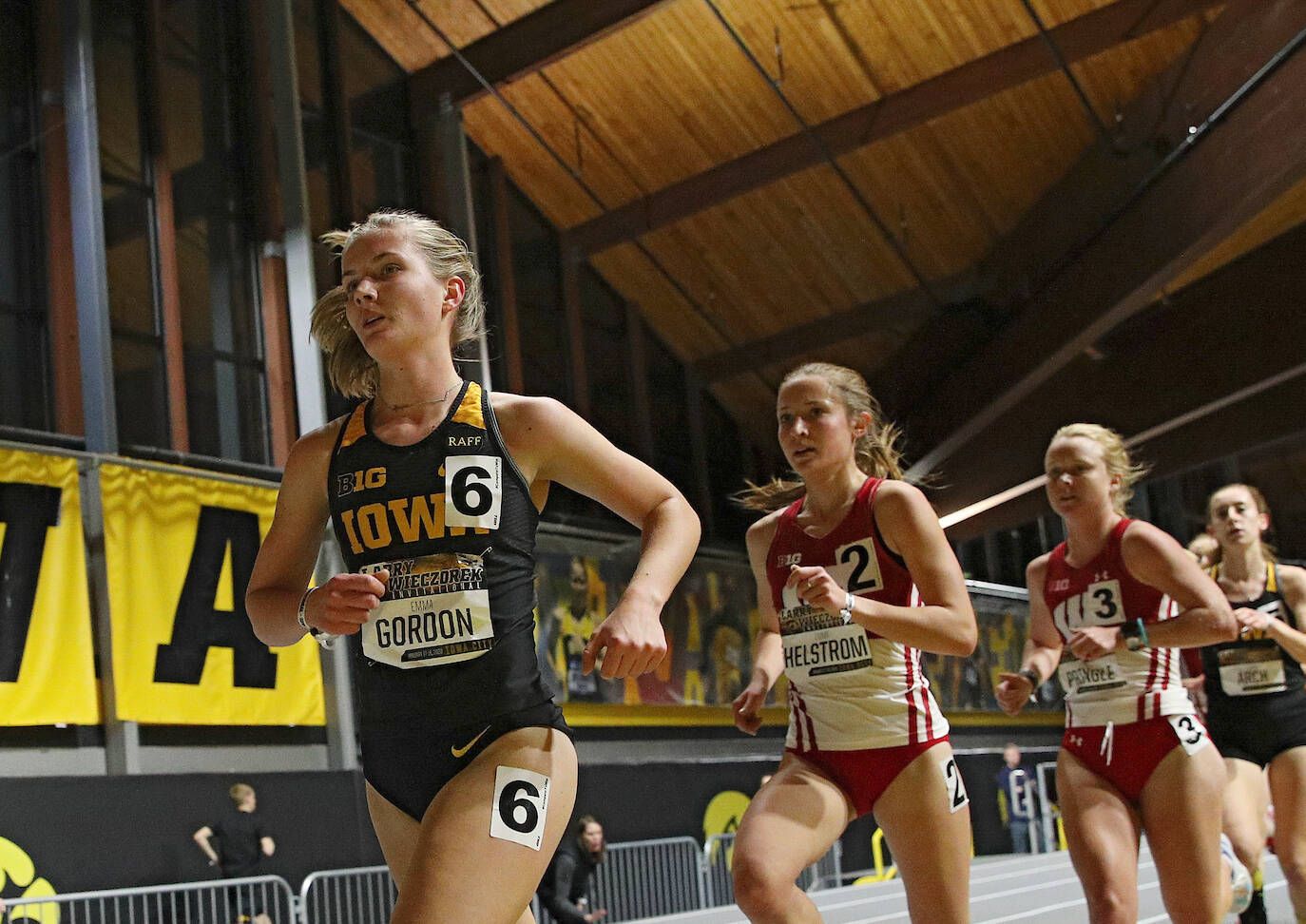 “I am looking forward to senior Emma Gordon and sophomore Amber Aesoph picking up from where they left off last spring. Each posted personal-best marks in the 800- and 1500-meter races. Our goal for them is to get under the 4:50 barrier in the mile and get the distance medley relay into solid scoring position going into the Big Ten indoor meet. Gordon and Aesoph each recorded their collegiate-best cross county seasons thus far. They really need to harness that energy and turn that momentum into points. I think we need to have high expectations for the DMR.

“In the longer races, sophomore Kelli Tosic, junior Gabby Skopec and senior Jessica McKee will give us strong entries in the 3,000- and 5,000-meter events. These three women are also coming off career-best marks from the cross country season. Our goals for the indoor season are high. We aim at dipping well under the 17-minute barrier in the 5,000 meters. That would be a significant step in the right direction. In the 3,000 meters, Kelli showed a lot of ability last winter. With the way she improved her mile and 1,500 meters, I am looking forward to her taking her 3,000-meters to the next level. All three are great competitors and very consistent with training. I am excited to see what they can do against great competition.

“Sophomore Brooke McKee and freshman Lauren McMahon are two extremely talented young women on our team that we are excited about. Each used their freshman eligibility during the cross country season and took turns leading the squad. More importantly, they were our top two finishers in the two meets that mattered most. Brooke led the squad at the Big Ten Cross Country Championship and Lauren led the charge at the NCAA Midwest Regional meet. Both are high-energy people and fierce competitors. I’m looking forward to their contributions in the 3,000 and 5,000 meters.” 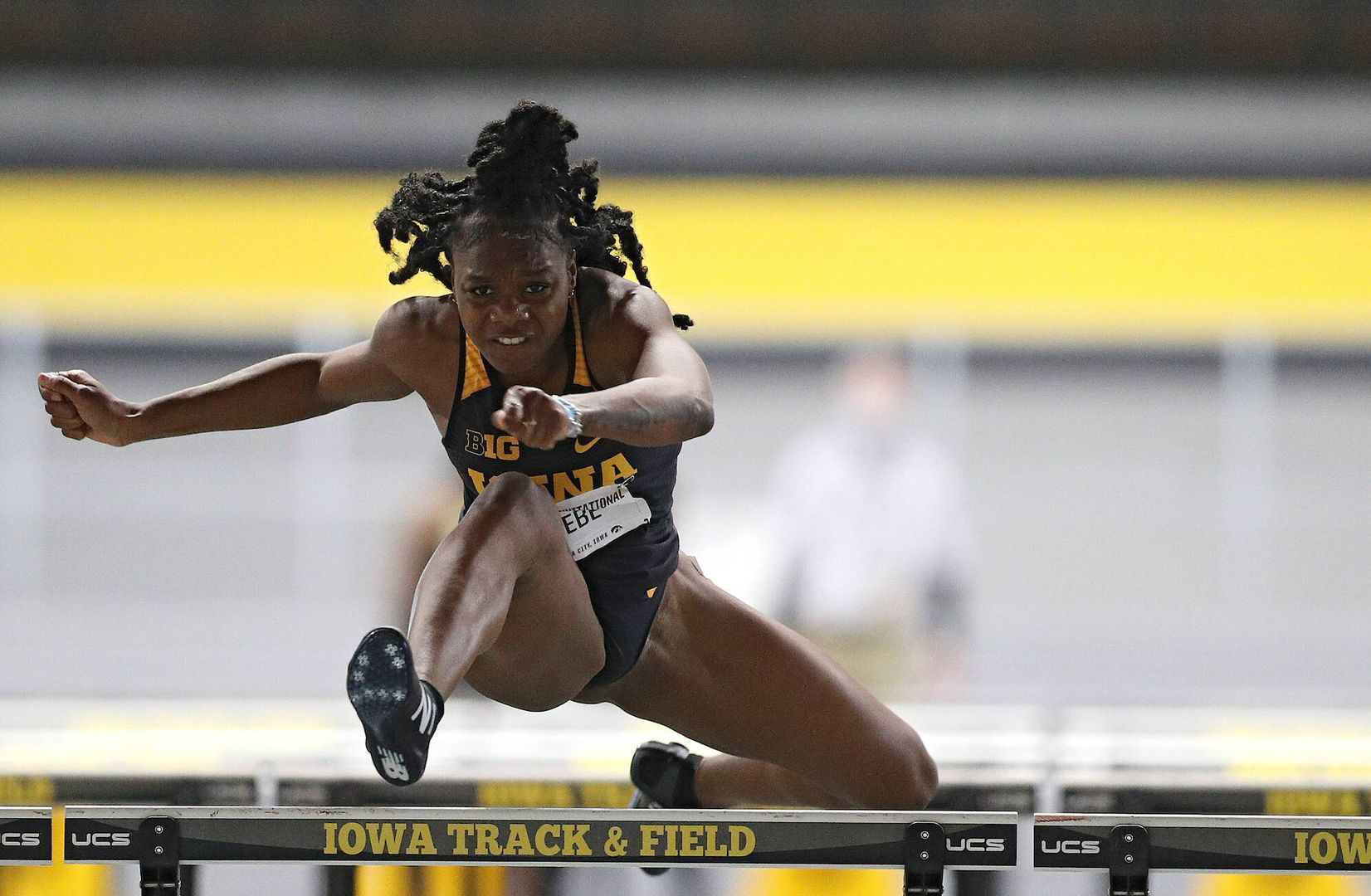 “The women’s sprints and hurdles groups are led by reigning Big Ten Champion Paige Magee, who also set the outdoor school record in the 100-meter hurdles last season. We’re looking forward to seeing Paige continue her progression in the hurdles and become a contributor in the other sprint events and 400-meter hurdles outdoors. Another sprint hurdler who had a fantastic finish to her freshman season is Myreanna Bebe, who was our highest-placing individual on the track at the NCAA West Regional. We’re also excited about multi-athlete Tionna Tobias who was also a Big Ten finalist in the 60- and 100-meter hurdles. I believe all three of these athletes will be contending to win the Big Ten Championship in the 60-meter hurdles this season.

“We have added a very talented freshman hurdler in Miya Brines. She has shown her ability in practice to hang with our top-three women hurdlers. This will be a very exciting group to watch throughout the season.

“The women’s sprints are led by LaSarah Hargrove who made her first Big Ten indoor and outdoor finals last season in the 200 meters. LaSarah has had a terrific fall and has shown her ability to make the Big Ten final and compete to medal in both the 60 and 200 meters this indoor season.

“We’ve also added quality depth in the short sprint group with freshman Lia Love who is a numerous state medalist from North Carolina, and Iowan Mytika Mayberry who has really transformed this fall and will look to contribute to the team in both sprint events. I’m very excited about the improvements we’ve seen in both Lia and Mytika since they stepped on campus.

“We have a terrific group of long-sprint women who train for the 400-meter hurdles but will be big contributors in the 400 and 600 meters at the Big Ten Championships, as well as the 4×400-meter relay. This group is led by Nylah Perry who had a breakout freshman season, finishing fourth in the 400 meters at the Big Ten Championships. Payton Wensel will compete to earn her first individual medal in the 600 meters this season after making the finals her last two years. Mariel Bruxvoort will look to make her first individual indoor final after having a breakout outdoor season, making the Big Ten finals in the 400-meter hurdles and qualifying for the NCAA West Regional.” 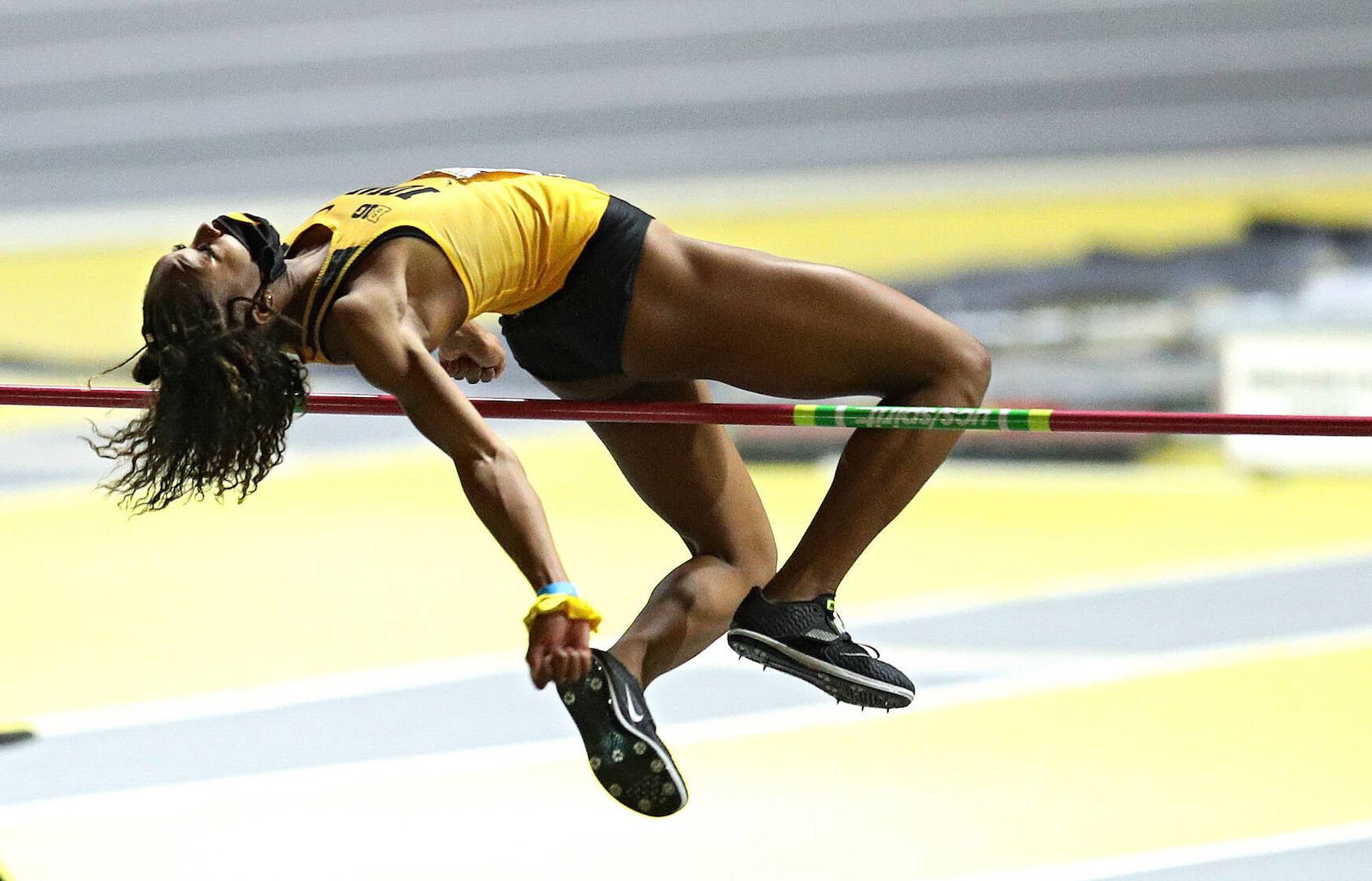 “This group is led by multi-athlete Tionna Tobias. Tionna has scored at the Big Ten Indoor and Outdoor Championships in multiple events including the pentathlon and hurdles. She’s looking to earn her first individual Big Ten medal and NCAA-qualifying performances this season.

“We have a very young, but talented multi-event group with new additions, Tahlee McVee and Ellie Johnson. Tahlee comes to Iowa from Australia where she was a multiple Australian Junior Champion in the heptathlon, as well as hurdle and jumping events. Tahlee has the tools to make an immediate impact in the Big Ten and NCAA. Ellie is a Wisconsin State Champion in the hurdles and long jump, and we believe she has a huge upside in the multis.

“The women’s horizontal jumps group is led by Big Ten finalist and point-scorer Kayla Hutchins, who has had tremendous fall training and looks poised to medal at the Big Ten Championships and hit the NCAA-qualifying mark in the triple jump. I’m extremely excited about the young group of horizontal jumpers we added this year with the addition of Jade McDonald and De’Anna Robinson. They were two of the best jumpers in the nation out of high school and will both be immediate contributors at the Big Ten and NCAA levels. Jade is also a top-ranked hurdler who will compete in both disciplines.

“The women’s high jumpers are led by senior and Big Ten point-scorer Maria Gorham. Maria will be competing to earn her first individual medal this season and qualify to make the NCAA meet. We have a young, but very talented group of freshmen who will make their debuts this indoor season. Kiersten Fisher and Jade Hunter are both terrific all-around athletes who have high school personal bests of 5’6”. They both have the ability to jump 5’8” or higher this season. Anne Guest and Ella Meussen are two additional talented jumpers who will add great depth to that group.”