THIS WEEK
The University of Iowa men’s golf team travels to Wilmington, North Carolina, on Oct. 21-23 for the Williams Cup at Eagle Point Golf Club.

TOURNAMENT SCHEDULE
The 54-hole tournament will span three days, with one 18-hole round taking place each day. Players will tee off from holes No. 1 and No. 10 from 7:30 a.m. to 9 a.m. (CT) each day. Iowa will tee off with first group on Friday, starting at 7:30 a.m. alongside Houston and NC State.

THE LINEUP
Seniors Mac McClear, Ronan Kleu, and Garrett Tighe lead off the Iowa lineup. Junior Callum Macfie and sophomore Ian Meyer round out the Hawkeyes, while freshman Hogan Hansen will compete as an individual.

THE COURSE
Spanning 7,417 yards, Eagle Point Golf Club is one of the premier courses in North Carolina. Designed by Tom Fazio, the par 72 course extends along the Atlantic coastline and is ranked a top-100 American golf course by Golf Digest magazine. Eagle Point played host to the 2017 Wells Fargo Championship, a PGA TOUR event. 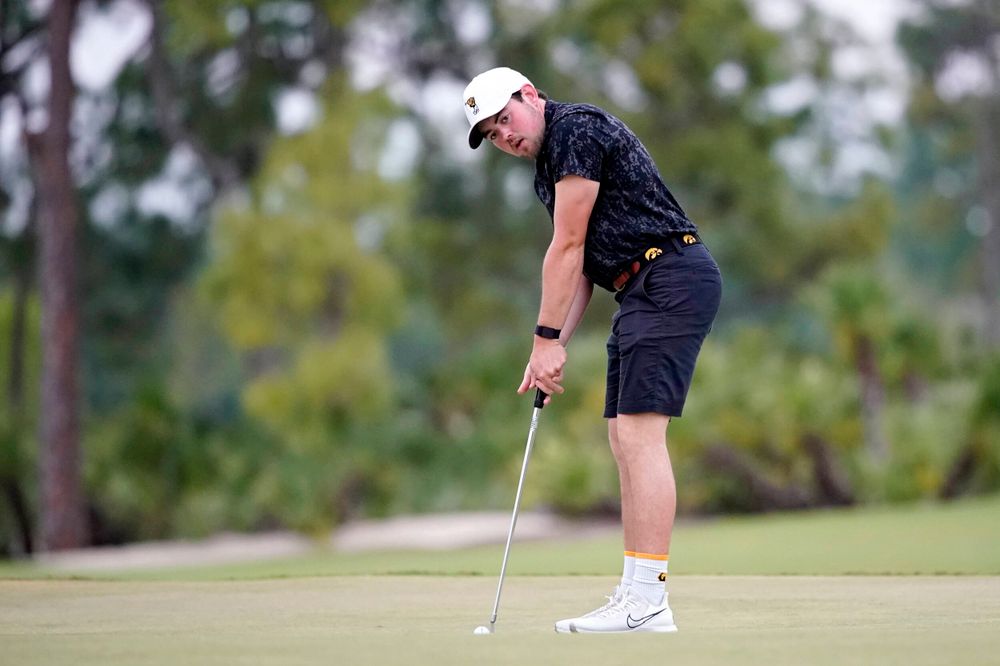 EXEMPTION ON THE LINE
The individual medalist at the Williams Cup will receive exemption into the 2023 Korn Ferry Tour event in Raleigh, N.C. The UNC Health Championship, previously known as the Rex Hospital Open, takes place June 1-4, 2023, at the Raleigh Country Club. Georgia’s Trent Phillips was the medalist at last season’s inaugural edition of the Williams Cup.

ON THE LINKS
The Hawkeyes took home the team championship at the Iowa Fall Classic last week, and McClear won the individual crown.

McClear was named a Big Ten Player to Watch on Aug. 31 and earned second team All-Big Ten honors last season. In 2021, McClear was the only unanimous All-Big Ten First Team selection and was named to the All-Big Ten Championships team after winning the fourth individual conference title in program history.

LOOKING AHEAD
The Hawkeyes conclude the fall slate this week. Iowa has not yet announced a spring schedule.