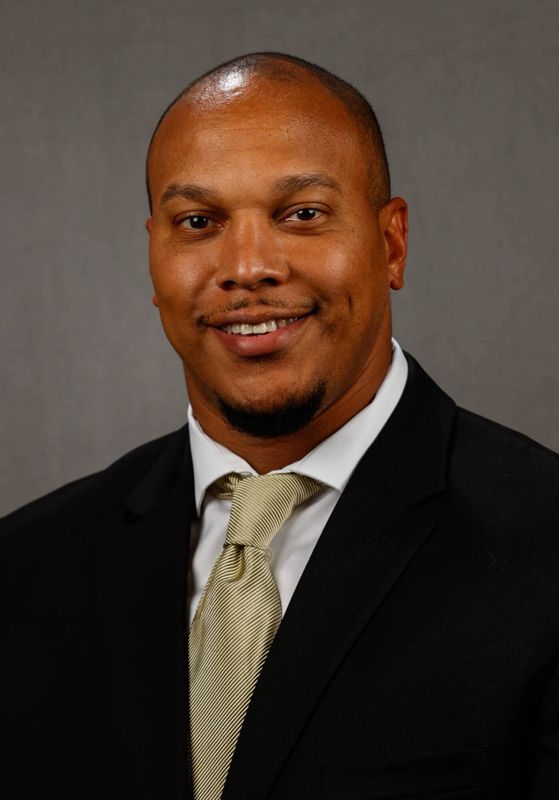 Former University of Iowa running back Ladell Betts, the second leading rusher in Iowa football history, is in his second year as running backs coach after being named to the position in March, 2021.

In his first season on the Hawkeye staff, Betts coached Hawkeye junior Tyler Goodson, who led the Iowa rushing attack with 1,151 yards and six touchdowns, while also collecting 247 receiving yards and one touchdown. Goodson earned third-team All-Big Ten honors after leading Iowa in rushing for the third straight season. Goodson, who declared for the NFL, ranks 10th in career rushing with 2,551 yards. Goodson signed a free agent contract with Green Bay immediately following the 2022 NFL Draft.

Following his Iowa career, Betts was selected by Washington in the second round of the 2002 NFL Draft. Betts played in the NFL for nine seasons, including eight with Washington and his final season with the New Orleans Saints. Betts played in 111 career NFL games, rushing for 3,326 yards and 15 touchdowns. He also had 1,646 career receiving yards and three touchdown receptions, along with 2,085 career kickoff return yards. His best single season included 1,154 rushing yards and 445 receiving yards in 2006. His career totals include 7,057 all-purpose yards.

Betts concluded his Iowa career in 2001 as a four-year letterman and is the only running back in program history to lead the team in rushing four straight years. Betts ranks second in career rushing yards (3,686), fourth in all-purpose yards (4,397) and 19th in career scoring (162).

Betts earned second-team All-Big Ten honors as a junior and senior. He was elected a team captain in 2001 and shared team Most Valuable Player honors in 1999 and 2001. Betts was a three-year member of the Leadership Committee during his Iowa career and served as an Ambassador with the University of Iowa Foundation during his final semester as a Hawkeye.

Betts earned his bachelor’s degree from Iowa in 2001 and completed the Business Management and Entrepreneurship Program through the Aresty Institute of Executive Education & The Wharton Sports Business Initiative.

Betts is a native of Blue Springs, Missouri. He and his wife, Shatarah, are the parents of five daughters, Tamryn, Saire, Soleil, Saavi, and Suraj, and one son, Torino.