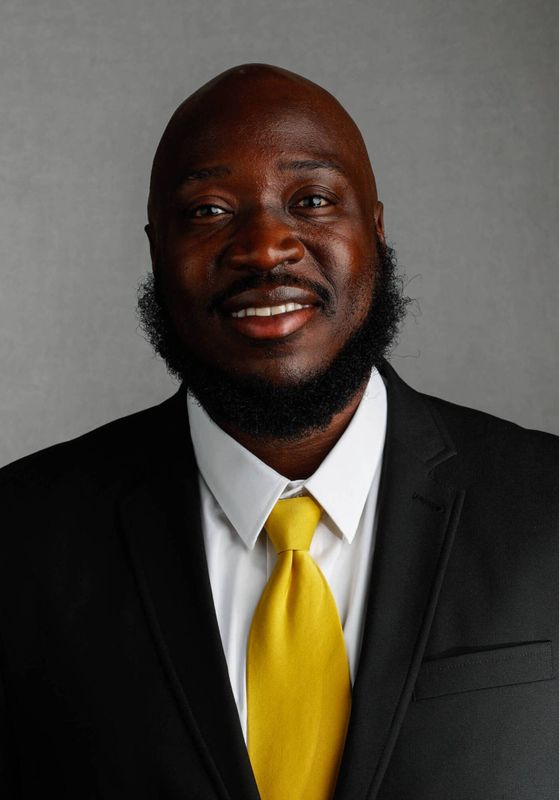 Hodge coached outside linebackers and was the staff NFL liaison at South Dakota.

Hodge, a native of Fort Lauderdale, Florida (Boyd Anderson HS), lettered for the Hawkeyes from 2002-05. He was a key player for the Hawkeyes in one of the most successful periods in school history, helping Iowa post a four-year mark of 38-12. The Hawkeyes won at least 10 games in three straight seasons. Iowa shared Big Ten titles in 2002 and 2004 and appeared in four straight January bowl games, winning the 2004 Outback Bowl and the 2005 Capital One Bowl.

Hodge earned first-team All-Big Ten honors in 2003 and 2004 and second team recognition in 2005. He served as a team captain as a senior and shared Most Valuable Player honors following the season. He also earned the Hayden Fry “Extra Heartbeat” Award and the Iron Hawk Award.

Hodge was a quarterfinalist for the 2005 Lott Trophy and earned All-America accolades as a junior and senior. He was selected to participate in the Senior Bowl following his final season and was later selected in the third round of the 2006 NFL Draft by the Green Bay Packers. Hodge played for Green Bay, Cincinnati and Carolina during his NFL career that concluded with the 2010 season.

Following his career in the NFL, Hodge founded Professional Interactive Solutions in his hometown of Fort Lauderdale, Florida, a company that helps businesses grow their online presence. In addition to running the business, Hodge served as an assistant coach for several high schools in Sarasota, Florida, from 2013-16. He was a coaching intern for the NFL’s Tennessee Titans before joining the South Dakota staff.

Hodge’s first year coaching at South Dakota was highlighted by a three-game win streak in the first half of the season in which the Coyotes held their three foes to a combined 745 yards and 16 points. It marked the first time since 2008 that USD held three consecutive foes to 16 points or fewer. USD went on to knock off fifth-ranked South Dakota State on Senior Day inside the DakotaDome when the Coyotes stopped three fourth-quarter drives to preserve a 24-21 victory.

Year two was unique at South Dakota in that it was reduced to four games due to the COVID-19 pandemic and was conducted in the spring of 2021. Rush linebacker Jacob Matthew led the team in sacks and tackles-for-loss for the second year in a row and was rewarded with honorable mention all-MVFC honors. South Dakota forced nine turnovers and produced seven sacks in four games, highlighted by a 27-20 upset at No. 7 Illinois State in the season opener. Two of the team’s four games were against FCS Top 10 teams.

South Dakota posted an 7-5 record in 2021, including a 5-3 conference mark. That record included wins over No. 13 North Dakota, No. 16 Northern Iowa, and No. 7 South Dakota State. South Dakota qualified for the FCS playoffs for the second time in program history, hosting a playoff game for the first time.

Hodge earned his bachelor’s degree in communications from Iowa in 2005.

Hodge and his wife, Chabli, have two children, a daughter, Amari, and a son, Abdul Jr.