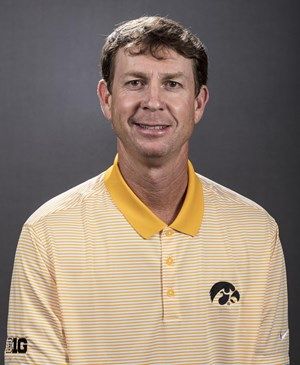 Jeff Schmid recently completed his second season as Iowa’s assistant coach. Schmid joined the Hawkeye staff in 2017, helping guide the Hawkeyes to an NCAA Regional appearance in his first season.

This past year, Schmid helped coach Iowa to three top-three finishes, including a third place finish at the Big Ten Championships. Schmid also helped mentor sophomore Alex Schaake to six top-20 finishes, including placing in the top-five four times, and an individual berth at NCAA Regionals.

Schmid has 18 years of professional golf experience. In 1991, he began his career as a touring golf professional where he remained until 2008. During this time he played on tours in Asia, South America, and Canada as well as tournaments throughout the United States including on the PGA and Nationwide Tours. Through those years he played in tournaments against virtually every top player of those eras from Tom Watson and Seve Ballesteros to Tiger Woods and Phil Mickelson.

He began teaching and coaching in 2008 and became Director of Instruction at Victoria Hills GC in Deland, Florida in 2009. After moving to Columbia, Missouri, in 2011 he taught at Perche Creek GC and AL Gustin GC. He received membership to the PGA of America in 2011.

He was Volunteer Assistant Coach for the Stetson University women’s golf team in 2009, 2010, and 2011. During those years they won the Atlantic Sun conference each year and advanced to NCAA Tournament. In 2013, Schmid was Volunteer Assistant Coach for the University of Missouri Men’s golf team. In that year, Mizzou had perhaps their best regular season winning six tournaments and reaching a national record of No. 13 in the country. He was also the Volunteer Assistant for the Mizzou women’s team in 2015 and 2016. In 2016, the team reached a season high ranking of No. 26 and reached the NCAA Tournament.

Schmid earned a bachelor’s of business administration degree in economics and marketing from Iowa in 1990. He is married to current Iowa head women’s coach, Sasha Schmid, and has two children, Lucy and Lily. He still enjoys teaching on the side and playing in PGA section events and national events.