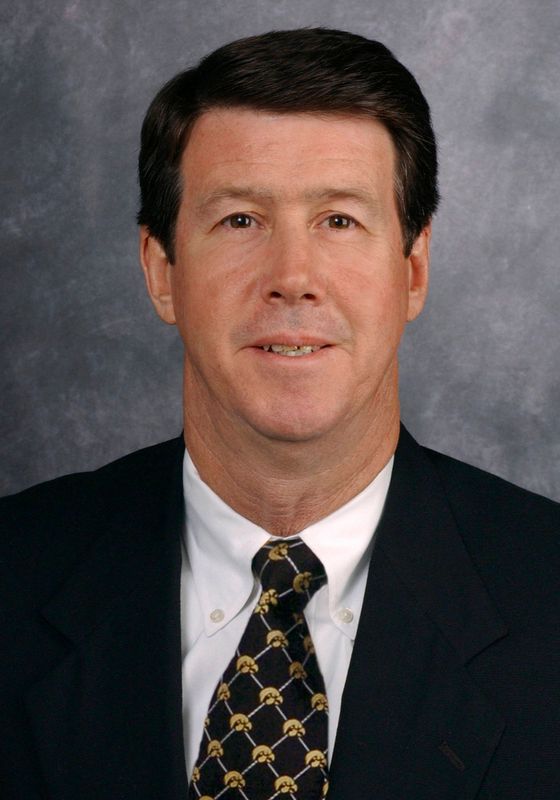 Ken O’Keefe was named University of Iowa quarterbacks coach in February, 2017, serving in that role through the 2021 season. O’Keefe is currently filling an off-the-field roll with Hawkeye football. O’Keefe previously served as offensive coordinator for 13 seasons (1999-2011). He was Iowa’s quarterback coach for 12 seasons after coaching Hawkeye wide receivers in his first year on the staff.

Iowa was bowl eligible in the final 11 seasons O’Keefe was previously on staff, ranking in the top 10 in the final national rankings on four occasions. Iowa won six bowl games between 2001 and 2010 with O’Keefe on staff.

Senior quarterback Nate Stanley led the Iowa offense in 2019 as the Hawkeyes ranked in the top three in the Big Ten in several offense categories, including first in fewest fumbles and fewest turnovers lost, red zone offense, and fourth down conversions. Stanley is just the second three-year permanent team captain in program history (LB Josey Jewell).

Stanley completed his three-year career with a 27-12 record as the starting quarterback. He ranks second in career passing yards (8,302), passing touchdowns (68), pass completions (673) and pass attempts (1,155), while ranking third in total offense. He is just the second Iowa signal caller to win three bowl games and earned honorable mention All-Big Ten for the second time in his career (2017). Stanley was selected by the Minnesota Vikings in the seventh round of the 2020 NFL Draft.

Iowa’s offense in 2017 was sparked by Stanley, who earned honorable mention All-Big Ten honors in his first year as a starter. Stanley passed for 2,437 yards, with 26 touchdowns and just six interceptions. The 26 scoring strikes ranks second best in a single season.

As a senior in 2001, McCann led the Hawkeyes to their first bowl game under Ferentz, a win over Texas Tech in the Alamo Bowl. McCann ranked second in the Big Ten in pass efficiency in 2001 while completing 66.3 percent of his attempts and passing for over 2,000 yards in his only season as a starter.

The following season, Banks led the Hawkeyes to a share of the Big Ten title as a senior. Banks placed second in Heisman Trophy balloting, winning the Davey O’Brien Award as the top quarterback in the nation. He was the Associated Press Player of the Year and was named Most Valuable Player in the Big Ten Conference after leading the nation in pass efficiency.

Chandler took over for Banks in 2003 and promptly guided the Hawkeyes to a 10-3 overall record, including a win over Florida in the 2004 Outback Bowl. Chandler passed for over 2,000 yards in his only season as a starter.

Stanzi set Iowa’s school record for passing efficiency (157.6) in 2010, passing for over 3,000 yards and 25 touchdowns, with just six interceptions. He passed for over 2,400 yards in his first full season as a starter in 2009, leading Iowa to a second place finish in the Big Ten and to an Orange Bowl win over Georgia Tech.

O’Keefe’s worked with Vandenberg in 2011, who was in his first year as a starter. Vandenberg passed for 3,083 yards and 28 touchdowns, with both totals ranking third-best for a single season in school history.

Offensive linemen Bryan Bulaga and Dace Richardson, along with tight end Tony Moeaki, earned first-team All-Big Ten honors in 2009. Bulaga was named Big Ten Offensive Lineman of the Year. Bulaga was a first round selection in the 2010 NFL Draft, while Moeaki was a third round selection.

Iowa’s offense in 2008 featured the Doak Walker Award winner in running back Shonn Greene. Iowa ranked fourth in the Big Ten in both rushing offense and pass efficiency while averaging over 370 yards total offense per game. The Hawkeyes ranked second in scoring offense (30.3) and first downs, and third in time of possession.

Along with being honored as the top running back in the nation, Greene was named the Big Ten Conference Offensive Player of the Year. Greene (third round), OL Seth Olsen (fourth) and TE Brandon Myers (sixth) were all selected in the 2009 NFL Draft.

From 2004-06 Tate ranked as one of the nation’s top signal callers. He ranks high in the Iowa record book for just about every passing stat. Tate signed a free agent contract with the St. Louis Rams following his Hawkeye career, and enjoyed a lengthy and productive career in the Canadian Football League.

Twenty Hawkeye offensive players under O’Keefe were selected in the NFL Draft. Four of the top seasons in Iowa history, for average passing yards per game, occurred under O’Keefe’s direction.

O’Keefe left Iowa following the 2011 season, joining the Miami Dolphins staff for five seasons. He was named Miami’s wide receivers coach in February, 2012, and served in that role prior to being named senior offensive assistant in 2015. He served as senior football research analyst in 2016.

Under O’Keefe, wide receiver Jarvis Landry set the Miami rookie record with 84 receptions in 2014, the fourth-most by any player in a single season in team history. Landry surpassed that mark with 110 receptions in 2015 and caught more passes (194) than any other player in league history during the first two seasons of their career.

Wide receiver Brian Hartline had the two best seasons of his seven-year career under O’Keefe. Hartline totaled 74 receptions for 1,083 yards in 2012 and added 76 receptions for 1,016 yards and a career-high four touchdowns in 2013.

O’Keefe was the head coach at Fordham University in 1998. He served as head coach at Allegheny College for eight seasons (1990-97). His career head coaching record of 83-17-1 included a 79-10-1 mark at Allegheny, where his team won five North Coast Athletic Conference titles and the 1990 NCAA Division III national title. O’Keefe led Allegheny to four undefeated regular seasons (1990, 1991, 1994 and 1996), and six NCAA playoff appearances. He was named NCAA Division III Coach of the Year in 1990.

In 1985, O’Keefe coached Fort Worth (Texas) Country Day School. From 1978-84, he led Worcester (Mass.) Academy to a 37-11 record and three New England Class A prep championships. O’Keefe started his coaching career as an assistant coach at the University of New Haven from 1976-77.

O’Keefe earned his B.A. degree in history from John Carroll University in 1975, where he played football and baseball. He was a three-year starter at wide receiver while at John Carroll.

O’Keefe was born Aug. 18, 1953, in Milford, Connecticut. He and his wife, Joanne, have two children, Meghan and Brendan.