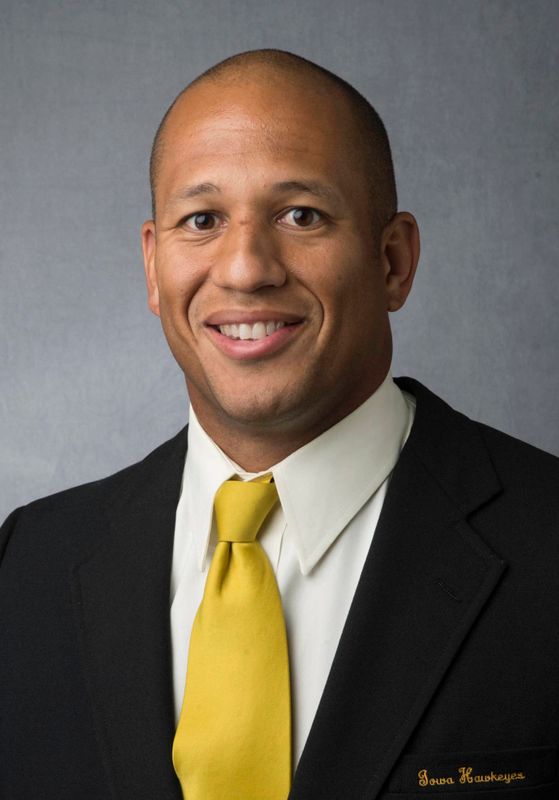 LeVar Woods, a three-year football letterman at the University of Iowa and a veteran of seven seasons in the National Football League, was named special teams coordinator in March 2017, after previously assisting with the Hawkeye special teams.

Led by first-team All-Big Ten selections in kicker Caleb Shudak and return specialist Charlie Jones, special teams made a major contribution throughout the 2021 season. Jones was named the Rodgers-Dwight Return Specialist of the Year due to his performance in returning both punts and kickoffs. Shudak earned first-team honors after leading the team in scoring (108 points) and setting a school record for career field goal accuracy. He was sixth nationally in field goals per game (1.71).

Iowa’s special teams played a key role in Iowa’s 2020 success as well. Taylor was named the Big Ten Punter of the Year. He was named first-team Freshman All-America by the FWAA and second-team All-America by The Athletic and was a semifinalist for the Ray Guy Award.

Iowa led the Big Ten and ranked fifth nationally in net punting (42.9) in 2020, while also ranking fifth in the nation in kickoff return coverage (15.7). Kicker Keith Duncan ended his career as Iowa’s career leader in field goal percentage (82.5 percent, which was eclipsed by Shudak in 2021) and is Iowa’s career leader with 20 field goals from 40 yards and beyond. Duncan ranks fourth in career field goals (52) and sixth in career scoring (252).

Iowa’s special teams in 2019 were led by Duncan and kickoff return specialist and wide receiver Ihmir Smith-Marsette. Duncan earned consensus first-team All-America honors and was one of three finalists for the Lou Groza Award. Duncan led the nation with 29 field goals (34 attempts), a total that ranks sixth-best in NCAA history. Duncan was named the Bakken-Andersen Kicker of the Year in the Big Ten while ranking 16th in the nation in scoring (119 points).

Senior George Kittle led the Iowa tight ends in 2016 with 22 receptions for 314 yards, while sharing the team lead with four touchdown receptions.  Despite missing two full games and parts of others due to injury, Kittle earned All-Big Ten honorable mention recognition. He participated in the Senior Bowl and the NFL Combine following the season and was selected by San Francisco in the fifth round of the 2017 NFL Draft. Kittle set an NFL tight end receiving record in 2018, earning All-Pro and Pro Bowl honors. He surpassed 1,000 receiving yards for a second straight season in 2019 while repeating as an NFL All-Pro selection.

Iowa’s special teams also performed well in 2016, led by return specialist Desmond King, who ranked second in the Big Ten in kickoff returns and third in punt returns. As a team Iowa led the conference and ranked seventh nationally in kickoff returns (25.9), while ranking second in the Big Ten and 11th nationally in punt returns (12.5). King earned NFL All-Pro recognition in 2018 with the Chargers.

Iowa’s tight end continued to play a key role in the offense in 2015, as Henry Krieger Coble and Kittle combined for 55 receptions for 695 yards and seven touchdowns. Krieger Coble signed a free agent contract with Denver following the 2016 NFL Draft and was a member of the Los Angeles Rams practice squad in 2018. Jake Duzey, who missed the majority of his senior season in 2015 due to injury, earned an invitation to mini-camp with Indianapolis in 2017.

In 2013, Woods joined with Jim Reid in coaching three senior linebackers who served as the leaders of Iowa’s defense. Anthony Hitchens, Christian Kirksey, and James Morris each recorded over 100 tackles while earning All-Big Ten recognition. The trio each recorded over 250 career tackles and combined for 950 total tackles in helping Iowa appear in three bowl games.

Kirksey was selected in the third round of the 2014 NFL Draft by Cleveland, while Hitchens was selected by Dallas in the fourth round. Hitchens has started in the NFL for five seasons, serving as a team captain for the Super Bowl champion Kansas City Chiefs in 2019. Kirksey has been a starter in the NFL the past five seasons but missed the majority of 2019 due to injury. Morris signed an NFL free agent contract with New England immediately following the draft and was with the Super Bowl champions throughout the season. He spent the majority of the 2015 season with the New York Giants.

Due to the play of the Iowa defense, Reid and Woods were named by FootballScoop as national Linebackers Coaches of the Year. Iowa earned a spot in the 2014 Outback Bowl behind a solid defense that ranked among the national leaders in total defense (sixth), first downs allowed (seventh) pass defense (ninth), scoring defense (ninth), pass efficiency defense (17th) and rushing defense (19th). The Hawkeyes recorded eight wins, including five in the Big Ten to tie for second in the Legends Division.

Woods served as Iowa’s defensive line coach in the 2011 Insight Bowl. Despite the loss to 14th-ranked Oklahoma, the Hawkeye defense held the Sooners to a season-low 275 yards total offense and just 114 net rushing yards. Iowa linemen recorded four tackles for loss, two sacks and an interception.

As an administrative assistant, Woods assisted the coaching staff in compiling statistical information, gathering information on opponents and recruits, and assisting in the day-to-day operation of the football office.

During his NFL playing career, Woods played for Arizona, Chicago, Detroit, and Tennessee. Woods signed with the Cardinals as a free agent in 2001 and spent the first four years of his career in Arizona.

Woods teams with fellow NFL player Kyle Vanden Bosch (both are graduates of West Lyon HS in Inwood, Iowa) in hosting a youth football camp in their hometown. He has also founded the LeVar Woods Football Academy in Okoboji, Iowa, teaching fundamentals and techniques to youth and high school athletes.

During his stint with the Cardinals, Woods was named a finalist for both the Byron “Whizzer” White and Walter Payton Man of the Year awards, recognizing his contributions to charity.

Woods has been involved with several charitable organizations throughout his career, including the Garth Brooks Teammates for Kids foundation, Homeward Bound, Soup Kitchen, Youth Christmas shopping trips and, Milk and Cookies Youth Reading Program, along with speaking engagements to elementary school children. Woods has also been instrumental in developing the Hawkeye Readers youth reading program in conjunction with the Iowa City: UNESCO City of Literature, which helps promote the importance of literacy to children.

Woods lettered as a member of the Hawkeye football team from 1998-2000. He was a two-year starter at outside linebacker, totaling 165 career tackles, including 18 tackles for loss and four sacks.

He was a team captain as a senior in 2000 and earned honorable mention All-Big Ten honors from both league coaches and media after recording 97 tackles. He was selected for the Blue-Gray All-Star game following his senior season.

Along with serving as defensive team captain, Woods was co-Most Valuable Player and the recipient of the Hayden Fry “Extra Heartbeat Award”, given each year to the Hawkeye player who gives extraordinary effort on the field.

Woods attended West Lyon HS in Inwood, Iowa, where he earned all-state honors and was the Class 2A Player of the Year as a senior. He rushed for 1,226 yards and eight touchdowns as a senior, while totaling 50 tackles, nine QB sacks and two recovered fumbles as a defensive end.

He earned his degree in elementary education from the University of Iowa in December 2000.

Woods was born March 15, 1978, in Cleveland, Ohio. LeVar and his wife, Meghann, have three children, daughters Sydney and Whitney, and a son, Mason.