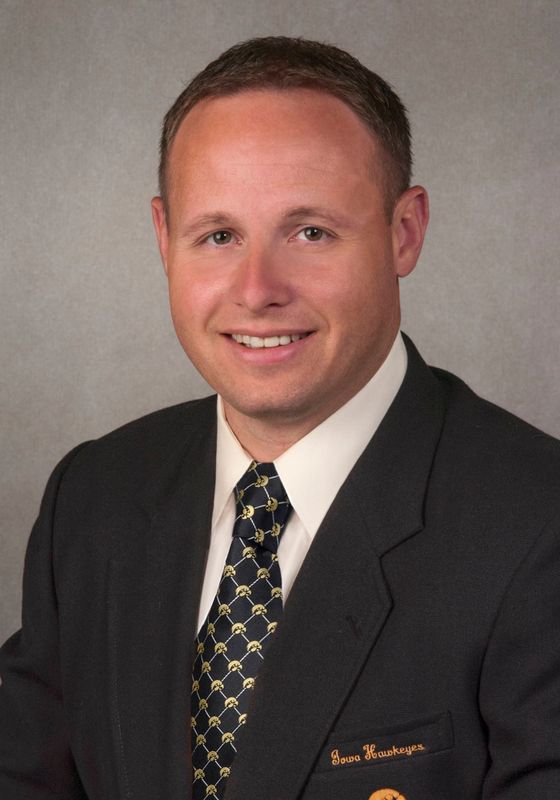 Seth Wallace was named linebackers coach at the University of Iowa in January, 2016, and was named assistant defensive coordinator in July, 2017. He served as Iowa’s recruiting coordinator in 2014 and 2015, while also coaching cornerbacks and nickelbacks in 2015. Wallace worked with the defensive line in 2014. Wallace previously served as a graduate assistant coach on the Iowa staff for three seasons (2006-08).

Junior linebacker Jack Campbell led the Hawkeye defense and ranked first in the nation with 143 tackles. Campbell earned first-team All-Big Ten and earned second-team All-America honors from two media outlets. He scored two of Iowa’s four defensive touchdowns in 2021, including a fumble return and an interception return. Fellow junior Seth Benson was second on the team with 105 tackles while earning third-team all-conference honors.

Following back-to-back narrow losses to open the 2020 season, Iowa won six straight games, all in Big Ten play, to complete the regular season. The Hawkeyes allowed just seven points in three of the six wins. The winning streak included road wins at Minnesota, Penn State and Illinois, and trophy game victories over Minnesota, Nebraska, and Wisconsin. The Hawkeyes were ranked 15th in the nation in the final CFP rankings and coaches poll, and 16th by the Associated Press. The Hawkeyes were selected to compete in the 2020 Music City Bowl, but that event was canceled.

Senior linebacker Nick Niemann led the Hawkeyes in tackles and ranked fourth in the Big Ten in tackles per game (9.6) in 2020. Niemann earned third-team All-Big Ten honors while Benson earned honorable mention recognition. Niemann was selected by the Los Angeles Chargers in the sixth round of the 2021 NFL Draft, while Barrington Wade signed a free agent contract (Baltimore) immediately following the draft.

Senior linebacker Kristian Welch led the Iowa defense in 2019, recording 87 tackled to lead the team despite missing three full games. Welch earned honorable mention All-Big Ten honors. He signed a free agent contract with Baltimore immediately following the 2020 NFL Draft and was with the Ravens throughout the season.

Iowa’s linebackers were an inexperienced crew in 2018 but contributed greatly to Iowa’s high national ranking in several team categories. Amani Hooker, splitting time between safety and outside linebacker, earned All-America recognition while being named the Tatum-Woodson Big Ten Defensive Back of the Year. Hooker declared for the NFL following his junior season and was selected in the fourth round of the 2019 NFL Draft by Tennessee.

Jewell became the third Hawkeye selected in the 2018 NFL Draft when he was selected in the fourth round by the Denver Broncos. Ben Niemann, also a three-year starter for the Hawkeyes, has been a key defensive contributor for the Super Bowl Champion Kansas City Chiefs for the past four seasons.

Jewell led the Iowa defense in 2016, ranking second in the conference in tackles while earning second-team All-Big Ten honors for the second consecutive season. The Hawkeyes ranked 13th in the nation in scoring defense and red zone defense, 19th in pass efficiency defense, and 23rd in total defense.

Iowa ranked first in the Big Ten and 10th in the nation in pass interceptions in 2015, while also ranking in the top 20 nationally in pass break-ups, turnover margin, turnovers gained, and rushing defense. Seven defensive players earned All-Big Ten recognition.

In 2014, Wallace assisted with an Iowa defense that ranked seventh in the nation in pass defense and 22nd in total defense. Iowa led the Big Ten and ranked second in the nation in fewest penalties and penalty yards. Senior tackles Carl Davis and Louis Trinca-Pasat, along with junior end Drew Ott, were each named second-team All-Big Ten.

In his 20 seasons coaching on the collegiate level, Wallace has served as both offensive and defensive coordinator, coached defensive backs, defensive line, and wide receivers, along with holding special teams duties in 13 seasons.

Iowa won the Outback Bowl following the 2008 season and also played in the 2006 Alamo Bowl. Valdosta State appeared in the NCAA Division II playoffs in 2010 and won the national title in 2012, while Coe College advanced to the Division III quarterfinals in 2002. He has coached 14 players who have earned All-America recognition and 18 players who have gone on to play professional football.

In both 2010 and 2011, Valdosta State ranked in the top three in the conference in seven defensive categories. The Valdosta State defense scored seven touchdowns and recorded three safeties. Valdosta State special teams led the league in kickoff coverage in 2010 and ranked second in 2011.

During his previous time on the Iowa coaching staff, Wallace worked with the Iowa defense, primarily the defensive secondary. The Hawkeyes posted a 9-4 record in 2008, including a win over South Carolina in the 2009 Outback Bowl. Iowa ranked fourth in the nation while tying a school record with 23 interceptions in 2008. Iowa led the Big Ten and ranked fifth nationally in pass efficiency defense (98.3) and scoring defense (13.0). Iowa also led the Big Ten in fewest touchdowns allowed, turnovers gained, pass efficiency defense and punt return defense.

Wallace also gained college coaching experience at Lake Forest College (2003-05) in Lake Forest, Illinois, and Coe College (2001-02) in Cedar Rapids, Iowa. He was offensive coordinator at Lake Forest in 2004 and 2005 as the team set school records for passing offense and total offense.

Lake Forest posted an 8-2 record in 2004 after a 7-3 mark the previous season. Wallace was defensive secondary coach and special teams coordinator in 2003 as Lake Forest led the conference in scoring defense, pass defense and total defense.

Wallace began his coaching career at Coe College in 2001, serving as wide receivers and tight ends coach, while assisting with special teams for two seasons. Coe posted a 10-2 record in 2002, winning the Iowa Conference title while ranking 14th nationally in Division III. The 10 wins set a school record for single season victories as Coe ranked first in the league in total offense in 2002 and first in passing offense in 2001. The Kohawks ranked first in the league and second in the nation in kickoff returns in 2001 and first and 11th in that category, respectively, the following season.

Wallace attended Grinnell High School in Grinnell, Iowa, and was a four-year letterman (1997-2000) in football at Coe College. He was a team captain and twice earned all-conference honors as a wide receiver at Coe. He led the league in receiving in 2000 and ranks in the top four at Coe in season and career receiving. Wallace led the nation in punt returns in 1997 and is Coe’s career leader. He earned all-state honors as a prep and competed in the Iowa Shrine Bowl following his senior season.

Wallace earned his bachelor’s degree in physical education from Coe College in 2001 and his master’s degree in sports management from the University of Iowa in 2008.