The Home of the Iowa Hawkeyes

Kinnick Stadium, home for the Iowa football team, served its 92th season of hosting Hawkeye football games in 2021. Currently the 28th largest college owned stadium in the nation (69,250), Kinnick Stadium ranks as one of college football’s finest facilities and is routinely filled on Saturdays each fall.

The $89 million Kinnick Edge project, which was completed prior to the 2019 season, provided enhancements to the north end zone of Kinnick Stadium. The latest upgrade included over 1,600 indoor and outdoor club seats as part of an entirely new north end zone. 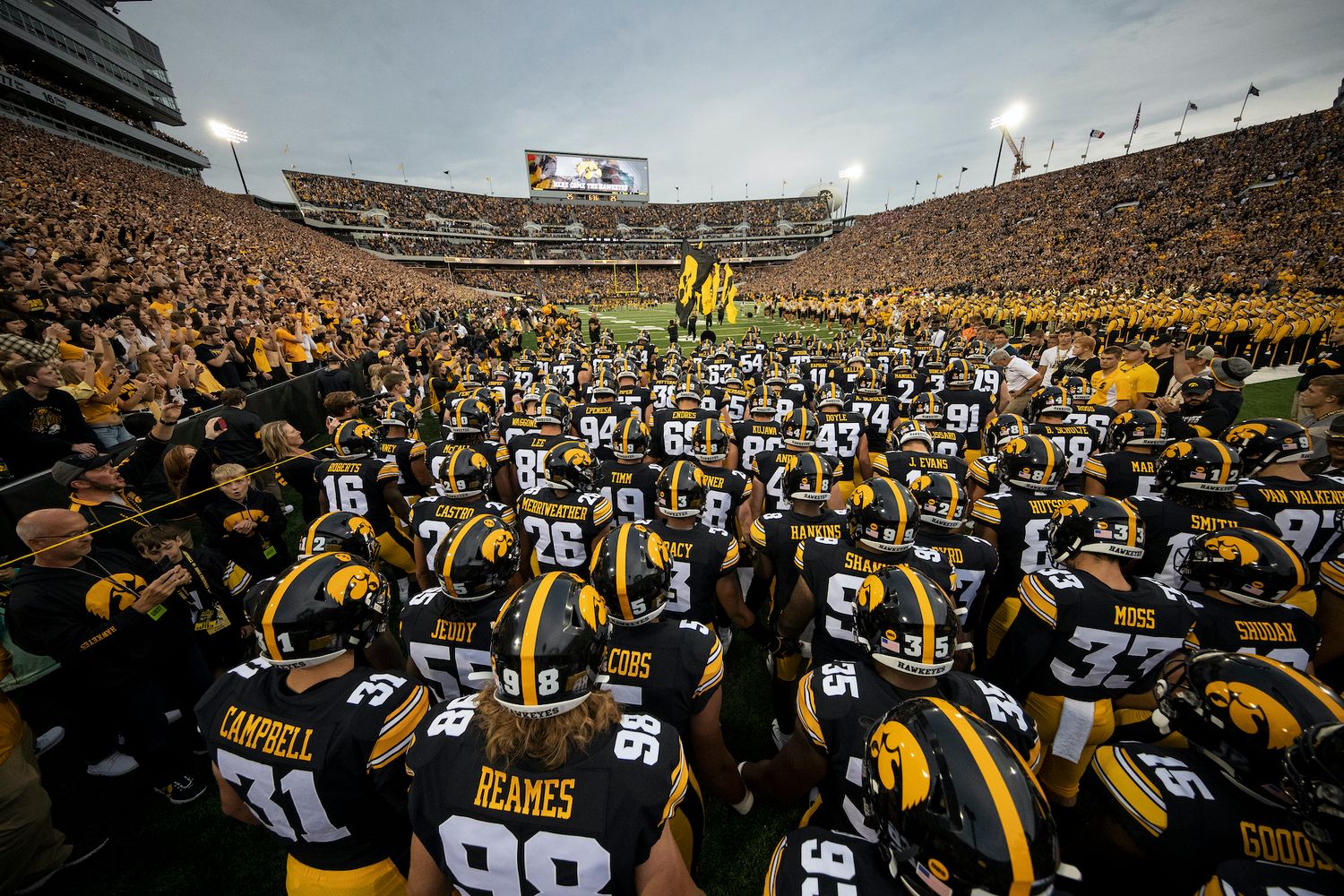 A two-year, $90 million restoration and renovation project for the stadium was completed prior to the start of the 2006 season. The project, which was the largest such undertaking ever for Iowa athletics, included an entirely new south end zone and a new press and hospitality facility. The south end zone project, which included new locker rooms, training room and media facilities for the Hawkeye football team on game days, was completed prior to the 2005 season.

The Paul J. Brechler Press Box, a completely new four-level press and hospitality facility, opened prior to the 2006 season. The facility extends the full length of the west side of the stadium. It includes 47 private viewing suites and over 1,000 club seats.

The south end zone renovation also provided a new entry plaza (Krause Family Plaza) to the south entrance, wider seats throughout most of the stadium, new and upgraded restroom facilities and concession areas, and an upgraded sound system.

Iowa draws sellout crowds for a majority of all home games, including 74 of the last 113 games over the last 18 seasons (not including 2020 due to pandemic). Iowa had a sellout streak of 36 straight games snapped in its 2008 home finale. 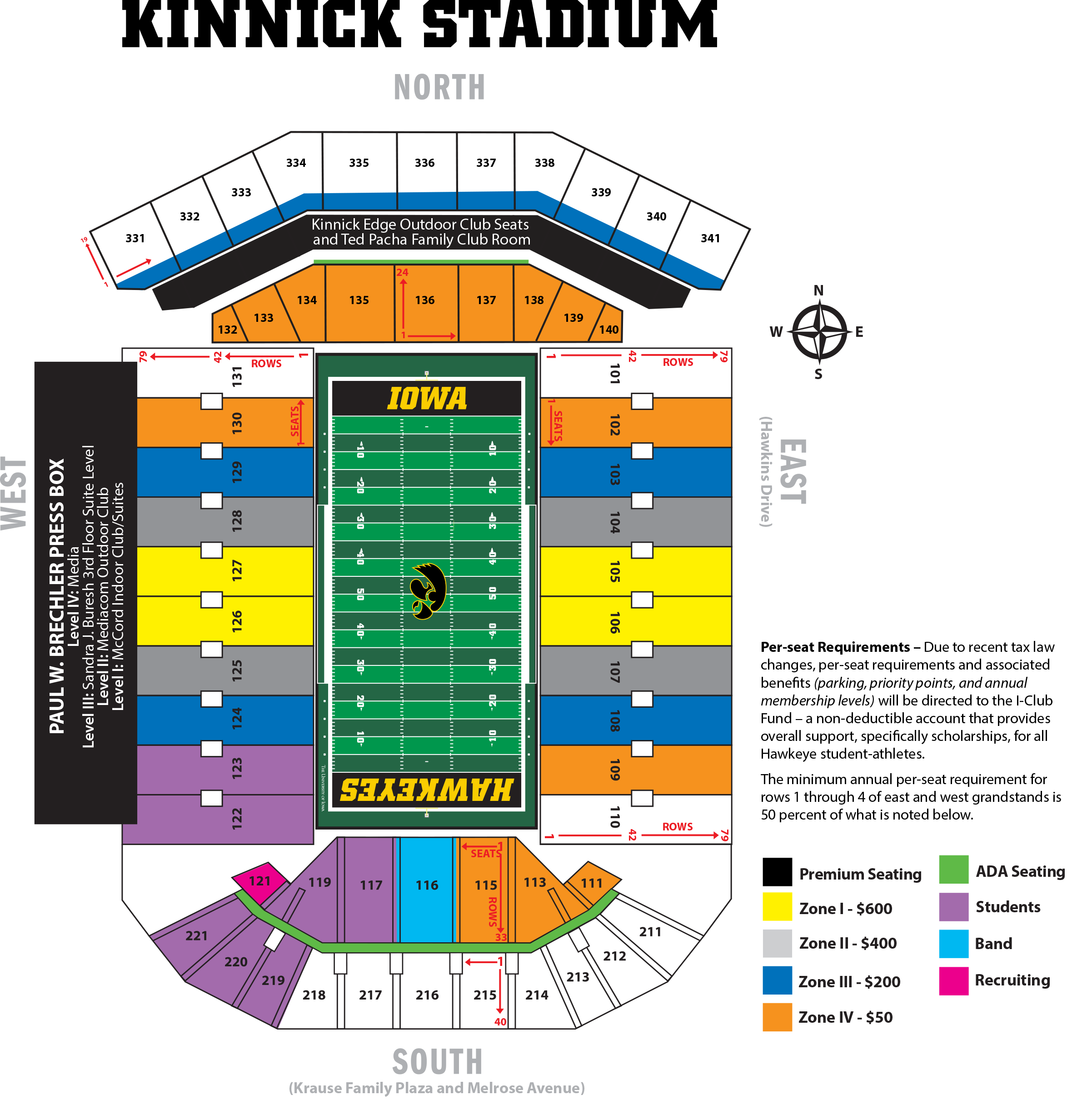 "We go all over the country doing these games. We saw Ohio State and Texas, and that was a great atmosphere. This setting, here in Kinnick Stadium, is as good as it gets all across America. These are great fans."

Construction on the original 53,000-seat stadium was completed Oct. 5, 1929, at a cost of $497,151.42. Original construction took six months, but the stadium has undergone several facelifts since. Seats were added to the south end zone in 1956, raising the capacity to 60,000. The north end zone was enclosed and capacity increased to 66,000 prior to the 1983 season. With three expansion projects completed since that time, the seating capacity at Kinnick Stadium reached 70,585. Kinnick Stadium has 20 miles of bleacher seats and is 79 rows high on each side. The seating upgrades that were part of the Kinnick Edge project reduced the current capacity to 69,250.

The playing surface in Kinnick Stadium in 2017 featured an Iowa logo for the first time since the conclusion of the 1980 football season, as the Tigerhawk was installed at midfield. The stadium playing surface was without a University logo since a block “I” adorned the center of the field from 1972 through 1980. Artificial turf was first installed prior to the 1972 season and the block “I” appeared at midfield until a new surface was installed prior to the 1981 season, without a logo at midfield.

The original five floor press box was constructed in 1958 at a cost of $490,628.62, and was located between the 25 yard lines on the west side of the stadium. Between 1995 and 1999, the Kinnick Stadium press box underwent a $3 million improvement and renovation project, which included the addition of 18 private viewing suites and the remodeling of all five levels. The original press box was demolished in December, 2005. 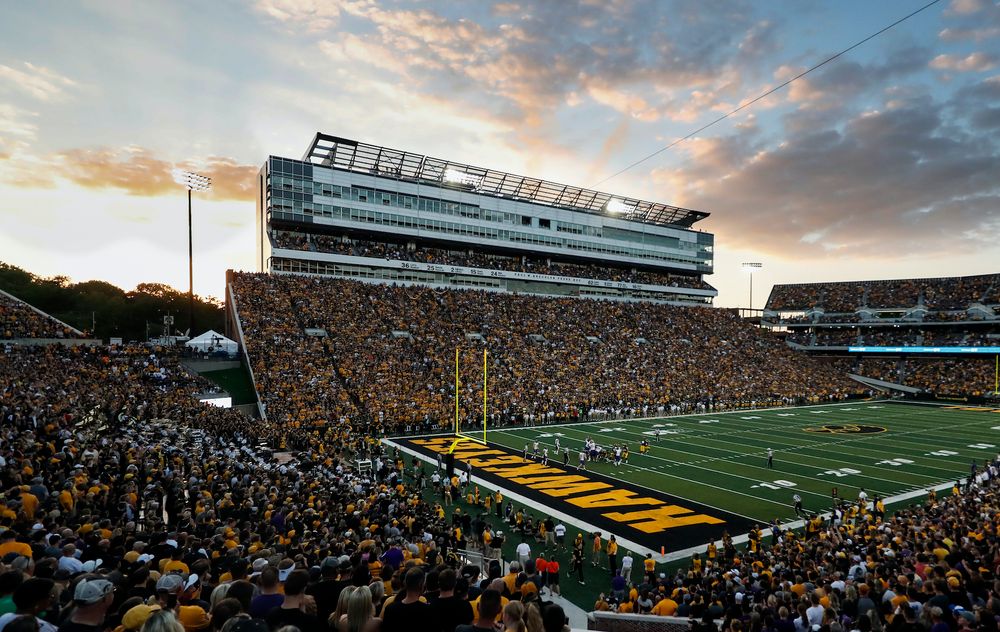 Spectators attending home games of the Iowa Hawkeyes enjoy all the benefits of watching a game on television, thanks to the installation of all new and expanded video boards and scoreboards prior to the 2013 season. The $9 million upgrade included large scale, HD video display units, which offer spectators live game action, instant replays and other features. In addition to the expanded main board in the south end zone, two additional video boards and a video ribbon were added to the south end zone. Upgraded scoreboards were put in place prior to the 2019 season, with a large jumbotron on the north end matching the south end.

Kinnick Stadium has a rich history, beginning with a 46-0 Hawkeye win over Monmouth in the facility’s first game. The Hawkeyes tied Illinois 7-7 in the dedication game Oct. 19, 1929.

In 1972, the name was changed from Iowa Stadium to Kinnick Stadium in honor of Iowa’s 1939 Heisman Trophy winner, Nile Kinnick. His No. 24 jersey was retired by the school due to his success as a scholar-athlete at the University. 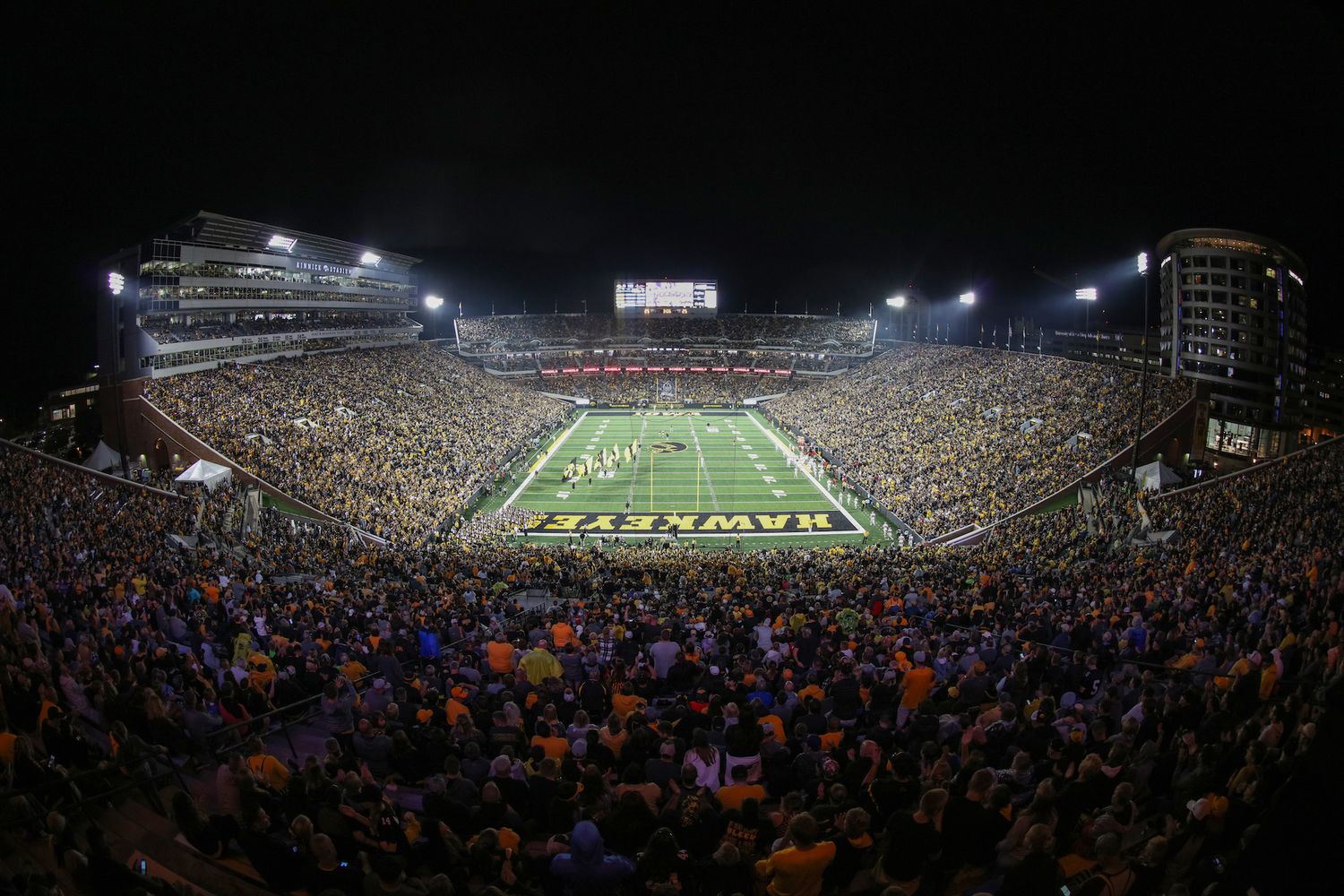