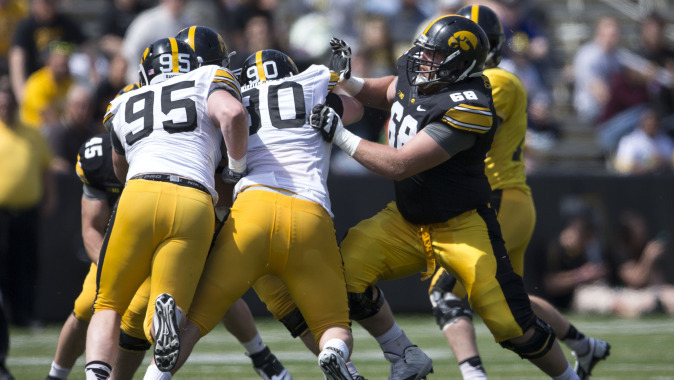 IOWA CITY, Iowa — University of Iowa offensive left tackle Brandon Scherff had a decision to make after the 2013 season. Scherff, a 6-foot-5, 320-pound junior, was projected to be an NFL first-round draft pick. After discussing the pros and cons with his family and head coach Kirk Ferentz, Scherff decided to remain in school for his senior year.

“He loves the college environment and being a part of the team is important to him,” said Ferentz. “The other factor is that he’s driven to be a better football player.”

Scherff, a three-year starter, is yet another left tackle talent the Hawkeyes have developed the past decade. Robert Gallery (2000-03), Bryan Bulaga (2007-09), and Riley Reiff (2009-11) all had successful careers for Iowa before advancing theirs careers in the NFL. Ferentz said that Scherff had a great season in 2013 and is excited for what the future holds.

“We’re thrilled that his best football awaits him, and that’s exciting,” said Ferentz.

After the Outback Bowl, the Hawkeyes returned to the weight room to begin preparations for the fall season. Scherff believes his power and skills improved during spring drills.

“We worked hard and had a successful winter in the weight room,” said Scherff. “My squat, hand clean, and bench press all improved greatly. In terms of agility, my foot work got faster.”

Team success is paramount, but winning the Outland Trophy, which is awarded to the nation’s top collegiate offensive lineman, is something that drives the senior each day.

“My goal is to be the best offensive lineman in the country,” said Scherff. “Coach Brian (Ferentz) told me that should be my goal. It’s in the back of my head, but you can’t let that get to you. You have to focus on doing your job and everything will take care of itself.”

“I tell my teammates that if they have any questions to ask and I’ll lead them in the right direction,” said Scherff.

Kirk Ferentz says it doesn’t happen often for a tackle to win the team’s offensive MVP award, which gives you an idea of the respect his teammates have for the native of Denison, Iowa.

“He’s looking forward to being a team leader and help us any way he can for us to have a successful team in the fall,” said Ferentz. “The things that motivate him are exactly what you want in the front of the room. You want other players to see that type of attitude and work ethic.”

Scherff is on pace to graduate with a degree in leisure studies in December before beginning the transition to the NFL. But, first-things-first… set an example of working hard every day to enable his team to have the best chance at competing for a division and Big Ten title in 2014.