Hitchens Drafted in 4th Round by Dallas 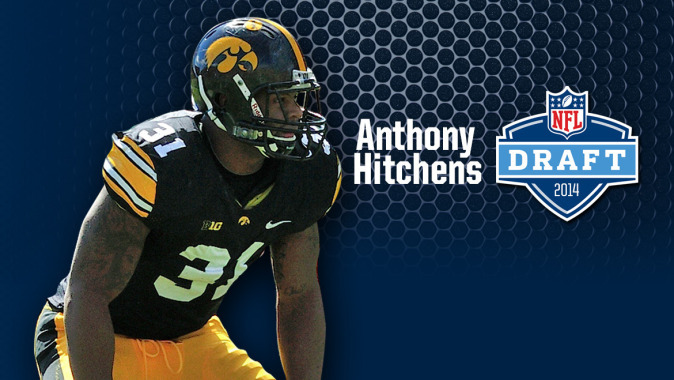 IOWA CITY, Iowa — University of Iowa linebacker Anthony Hitchens was selected by Dallas in the fourth round (119th pick overall) of the 2014 NFL Draft on Saturday. Hitchens is the third Iowa player selected, as TE C.J. Fiedorowicz (Houston) and LB Christian Kirksey (Cleveland) were selected in the third round Friday.

Hitchens is the 55th Hawkeye player under Kirk Ferentz to be drafted and is the seventh Hawkeye linebacker chosen in the NFL Draft since 2006. Furthermore, this NFL Draft marks the third time under Ferentz that Iowa has had multiple linebackers selected (A.J. Edds and Pat Angerer in 2010, and Abdul Hodge and Chad Greenway in 2006).

Hitchens becomes the first Hawkeye since OL Joe Levelis and FB Norm Granger in 1984 to be selected by the Dallas Cowboys.

Hitchens (6-1, 233) is a native of Lorain, Ohio, where he attended Clearview HS before joining the Hawkeye program. He earned second team all-Big Ten accolades as a senior, starting the final 14 games of his career and 24 games overall.

Hitchens, who played four straight seasons beginning as a true freshman in 2010, finished his Hawkeye career with 270 tackles, a total that ties for 21st in school history.

Hitchens, who was shared team MVP honors with OL Brandon Scherff this past season, led the Hawkeyes in tackles as a junior (124) and senior (112). In addition to his 112 stops as a senior, he amassed 13.5 tackles for loss and two QB sacks. He also had two forced fumbles, one fumble recovery, one interception, and one pass break-up.

One of Hitchens’ most memorable plays as a Hawkeye was when he stripped QB Devin Gardner and recovered the fumble to thwart Michigan’s final drive and preserve Iowa’s 24-21 victory on “Senior Day” at Kinnick Stadium on Nov. 23, 2014.