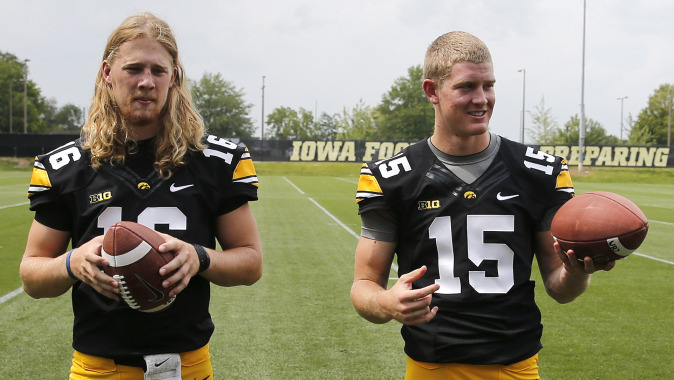 IOWA CITY, Iowa — Last year there was hopeful confidence within the University of Iowa football program when it came to the quarterback position.

This year there is solid sureness.

The Hawkeyes entered their 2013 opener against Northern Illinois with zero quarterbacks who had taken a snap in a collegiate game. Iowa kicks off 2014 against Northern Iowa with junior Jake Rudock and sophomore C.J. Beathard, who are not only experienced, but both have big game, end-of-the-season exposure.

During a 38-17 win at Nebraska on Nov. 29, Rudock completed 9-of-15 passes for 126 yards and two touchdowns. Beathard attempted two passes and ran for a 4-yard touchdown.

“It’s the exact opposite of last year,” University of Iowa head coach Kirk Ferentz said Monday at the team’s annual media day. “We have two guys that are experienced and we have confidence. Last year we had hopeful confidence in both guys, but it’s a lot better after you watch a guy actually perform in competition.”

Although Albert said it, it doesn’t take an Einstein to realize that “the only source of knowledge is experience.”

“I hope you’re a better driver at 20 than you were at 16 when you got your license,” Davis said. “It is the same thing with the quarterback. There is a reason these pros play their best at 30 and 31; (New Orleans Saints quarterback) Drew Brees is 35. It’s experience. They have done it, know what to look for and know where the problems are. We want to build on that and empower those guys to be able to do even more.”

Rudock led the Hawkeyes to an 8-5 record last season and a trip to their fifth bowl game in six seasons.

“Experience is the ultimate test,” Rudock said. “It is one of those things that people might not always realize, but you get comfortable in the pocket, understand protections better, and understand what you are seeing.”

Rudock enters fall camp as the starter. “That’s not a debatable question right now,” Ferentz said. But it is a luxury to have Beathard in the bullpen.

“I’m going to compete my butt off and continue to do the best I can and not settle for anything less,” Beathard said. “I will try my best to win a spot. I didn’t come here to play back up the whole time. I’m going to go into camp like I have a spot to earn and that’s my job.”

During spring ball, Davis noticed more poise from Rudock and Beathard. Because of that, the quarterbacks could “stretch themselves,” which is something the Hawkeye staff continues to encourage.

“Last year we thought that Jake and C.J. would be fine,” Davis said. “Now after a year, we’re confident that they will be fine.”