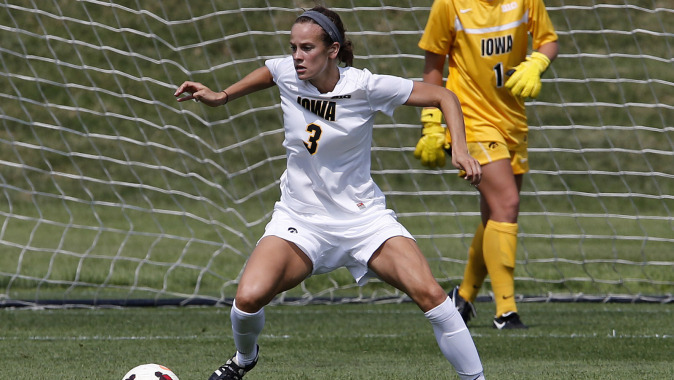 In the Big Ten coaches’ poll, Penn State was picked as the conference favorite followed by Wisconsin and Maryland. Iowa was picked to finish tied for 8th among the 14 conference teams.

Brown, a native of Ann Arbor, Michigan, started all 23 matches last season and logged a team-high 2,105 minutes. She anchored a Hawkeye defense that tied the school record for most shutouts in a season (10).

Lacasse led the Hawkeyes in points (19) and assists (seven), while ranking second in goals (six) and shots (72) during her junior season. The Sudbury, Ontario, native was named to the Big Ten All-Tournament team and was a second-team All-Big Ten selection in 2013.

Pickert was also a second-team All-Big Ten honoree in 2013. The Canton, Michigan, native started all 23 matches, leading the team in goals (seven), penalty kick goals (three), and tied for the team lead in game-winning goals (three). The defender also ranked second on the team in points (18) and third in assists (four).

The Hawkeyes travel to DePaul for an exhibition contest on Thursday beginning at 4 p.m. (CT) before opening the regular season on the road at Northern Iowa on Aug. 22.