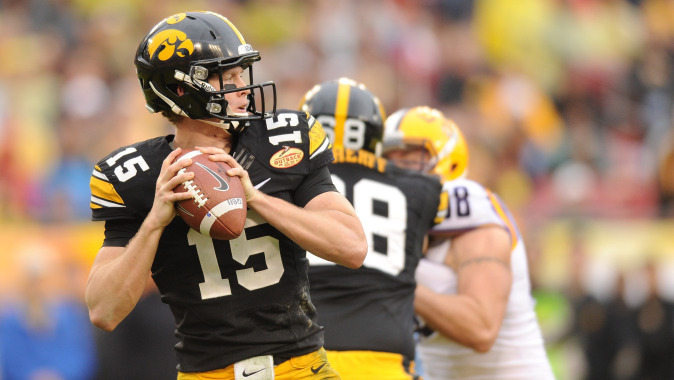 Rudock, a 6-foot-3, 208-pound junior, started every game last season and led the Hawkeyes to the 2014 Outback Bowl. The Weston, Florida, native completed 204-346 pass attempts for 2,383 yards and 18 touchdowns, and rushed for 218 yards and five touchdowns. Rudock was one of three FBS players since 2008 to pass and rush for four-plus touchdowns in their first four career games (Robert Griffin III, 2008, Johnny Manziel, 2012).

Established in 1847, the Golden Arm Award recognizes athletes who not only demonstrate great prowess on the field, but also display exemplary character, citizenship, scholastic achievement, sportsmanship, teamwork and leadership qualities in their communities.

The Manning Award, sponsored by the Allstate Sugar Bowl, will be recognizing its 11th winner this year. The watch list includes 32 of the top quarterbacks entering the 2014 college football season. The winner will be selected by a voting panel, which includes national media and each of the Mannings.

For more information on the Golden Arm Award, and the Manning Award please visit:
goldenarmfoundation.com
allstatesugarbowl.com

Rudock and the Hawkeyes will open the 2014 season by hosting Northern Iowa on Aug. 30 inside Kinnick Stadium. Tickets are available to be purchased by contacting the UI Athletics Ticket Office at (800) IA-HAWKS, or online at hawkeyesports.com