Q & A with Mike Hardy 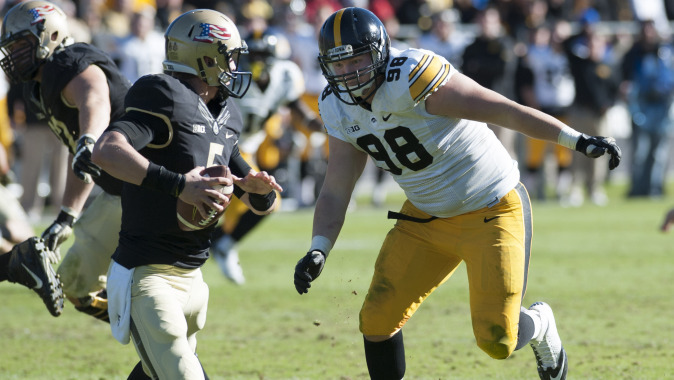 Q: What’s the best part of preseason camp?
A: I’d say being able to get the season started, being able to hang out with your teammates and get things started.

Q: What are you looking forward to most about this season?
A: Being able to go out and compete, and see how much we’ve grown since last year. We’ve got a great group a guys and I think we can go out and make a run this season.

Q: Who chooses the music in the locker room on game days?
A: I’m not sure who does that but I definitely think we could get a little more country thrown in there personally.

Q: As a senior how do you prepare underclassmen to play on such a big stage week in and week out?
A: You’ve just got to lead by example. They know that you’ve been through it, and if they have questions you’ve gotta try and answer them. Like right now, I have a freshman roommate so he’s asking me questions with the defense and I’m trying to help him out.

Q: What part of your game has improved the most this offseason?
A: I would say my confidence. Being able to know that I can go out there and compete with some of the best players in the country helps a lot.

Q: Who is the player on defense that Hawkeye fans are going to learn about this year, that maybe they didn’t see as much last year?
A: I think a lot of the linebackers and some defensive linemen are going to step up. Jaleel Johnson, Nate Meier and Faith Ekakitie, I think all of them will all step up.

Q: What’s it like running out of the tunnel?
A: It’s pretty awesome, you see it and you watch it on TV. You know me growing up in Appleton, Wisconsin, I wasn’t actually an Iowa fan, but you’re hearing about it one minute, and then actually being a part of it, really it’s just really awesome.

Q: Do you still remember the first time running out?
A: It was great; I thought I was going to trip. I didn’t want to do that, luckily I didn’t.

Q: What would it mean to bring a Big Ten Championship back to Iowa City?
A: Oh man, it would mean so much. We’ve been so close in the past. My freshmen year we were close, last year we had a chance and we’re working really hard, if we keep going and have a good camp I think we’ll be able to bring one home.

Q: What’s your major and what’re your plans after college?
A: My major is sports activities with a physical activity and nutrition science minor. I’m just going to see where football takes me and if it doesn’t work out, I don’t know, go and try to find a job.

Q: What are you going to miss the most when it’s all said and done here at the University of Iowa?
A: Having the college environment and being able to run the field on Saturdays and having the support from family and friends. Being able to hang out with teammates and coaches and friends.