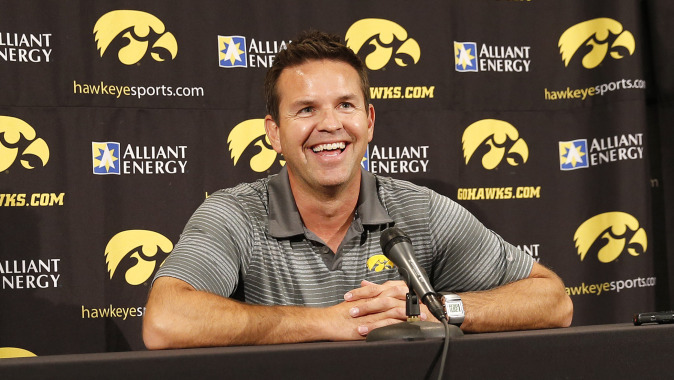 COACH SHYMANSKY: Thanks for being here. We appreciate you coming to cover us and helping grow this program because we know it can’t be a tree falling in the woods. We need our whole community to embrace what we’re doing, and our crew is fired up.

Our team is like all teams in all of their preseasons everywhere across the country. They’re working hard. They’re excited. They’re anxious, eager. They’re hopeful. But that’s not what’s going to be what separates us.

I actually see our team growing, changing, adapting, developing and persevering through the challenges of preseason. We’ve been practicing two, three times a day. We’ve been doing a lot of mental and emotional work as well. Because a lot of winning at this level happens between your ears, we want to make sure that we have our minds right to go out and compete in what everyone knows is the toughest conference in volleyball in the country.

We’re an excited group. We’ve made a lot of great improvements even over the course of the preseason. I keep reminding the team there hasn’t been a single season I’ve coached where my starting lineup on day one is the same as it finishes on the last day. It always changes.

I always think I know what it’s going to be, and I’m always wrong. So that’s a good time to be wrong and to coach when you have new players that emerge and do things that you weren’t sure they could do or you didn’t know they could do. And that’s happening for us every day.

It looks like we’re headed toward a lineup that will have maybe nine or 10 players actively involved in starting roles. And that’s a good thing.

That means we have depth, and we have a lot of people that are finding ways to contribute. I’m fired up. I’m really excited about meeting the Hawkeye squad this year as the head coach. And I’m excited about the challenges that are in front of us both nonconference and conference.

We have some very lofty goals within our group, but they’re also realistic goals. We know that performing well in the Big Ten gives you a right to stake a claim on an NCAA berth and potentially a Final Four appearance. That’s the ultimate goal for our program is to win the national title. A lot of that starts with what we’re doing today with this group.

Whether it comes to fruition or not this season, it’s not what’s important. The important thing is that we’re moving in that direction starting now.

Q. Can you tell me a little bit about the mental training, without giving away any coaching secrets? What sort of things do you work on in that respect?
COACH SHYMANSKY: Really a lot of the mental training, it’s not just what plays are we running and how are we communicating on court to run those plays and make those adjustments, that stuff’s really important.

But that’s what happens during the eight seconds of the rally. Then the whistle blows. Somebody won or lost the point. And then there’s this other eight seconds that happens between that end of that point and the start of the next point.

That eight seconds is what we spend the most time focusing on. How are we communicating with each other about improving what we did or changing what we did, getting over what we didn’t do. That’s the psychological part, and that’s where our game moves so fast. But there’s so many big momentum shifts all the time.

To have the competitive character to do it right the next time, even if you failed the previous time. That’s the mental and emotional stuff that we spend time on. And of course all the team building that happens. You have all these young women that are eager to succeed.

But they’re like anybody. They have self doubt, they have challenges and they have real lives outside of volleyball. So those are things that we have to embrace as a group, and they have to learn how to cope with and support each other through. By the end of the season we feel like that’s probably about where 80 or 90 percent of our success will come from, not really what we do technically with the ball but what we can do together as a group and that takes a lot of emotional and mental stability.

Q. How exciting have the last couple of weeks been, finally being in the gym with the girls building towards the season?
COACH SHYMANSKY: My first day on the job was February 1. This time has been a long time coming to get to opening day of preseason, finally getting in the gym and practicing for the real deal.

In the first 10 days now, we’ve had 18 practice opportunities. There have been four of them that I’ve walked away from and said, “Oh man, we’ve got something special here. We’re going to be good this year and nobody can see it coming.”

There have been four I’ve walked away from and said, “Oh man, we’re in big trouble this year and we have no idea what’s going to be coming.”

Then there’s the stuff that happens in between. We’re always talking to them. We have to bring the bottom up, and that’s how we’re going to become more consistent. We want to keep stretching the top, and that’s how we’ll achieve our goals. I see both of those things happening.

It’s been rewarding for our whole staff and team, and you’ll see it on them. You’ll walk into the gym and you’ll feel it on them. I do. I feel it on them. They have a level of self confidence right now and determination. It’s not a false sense of confidence. They know that they’re doing something already better than what they’ve done before. That belief really goes a long way when you get into collegiate athletics.

It is not the kind of thing that I could choose to do next year or five years from now. It really was a once in a lifetime opportunity. When that window opened and Gary (Barta) invited me through it, it was great. I was happy to jump through that window. I knew there were a lot of scary things about jumping through that window, because the program has struggled in the past, but having belief and confidence in our leadership in the department as a whole, the university, all of that, I feel like I’m a great product of everything that Iowa as a university and Iowa City as a community can do. So I’m proud to represent that product and our volleyball program.

But this is pinnacle. It is the best conference. This is the best job in the conference for me as a head coach. I can’t envision anything better. And when I started coaching a long time ago, 17 years ago was my first collegiate season, I never envisioned I would get back here.

It was always tunnel vision for what I was doing in the moment. If you would have asked me last year if I thought I was going to come back here, the answer would have been I don’t know, I had no idea. I never set it out as the goal. But now that I’m here, the goal is to make this the absolute best program that it can be.

And I think that means making it a national champion. So there are certainly great prosperous things ahead for our program.

Q. What would you consider a successful season, as far as progress for this program this year?
COACH SHYMANSKY: A successful season for us needs to be measurable. We need to talk about wins and losses with our group, and we actually haven’t endeavored to do that yet. Tomorrow we’re going to do that, frankly, on our first true day off in preseason. But the number I’m going to put to them is 20.

But also I think the progress you’re going to see it just in the way we compete, the style we compete with, the game we’ll play is a lot faster than most other big teams are going to play. It’s going to have more risk elements. So there might be times where we where we’ll have to live on both edges of that sword. Sometimes we’ll be able to slice with it. Sometimes we’ll get cut.

I think the end product is now we have a sword to swing with. That’s important for our group to have confidence knowing who we are, what our team identity is, how that identity will compete and win inside our league.

Q. Do you feel any pressure from this being your hometown? Do you feel any of that at all or are you focused on the team and getting the season started?
COACH SHYMANSKY: If you’re a collegiate coach at any sport and you don’t feel pressure, then you’re not paying attention or you’re not driven to win like you should be. So I think it’s inherent in our job, but it’s inherent in a lot of jobs.

Being in my hometown, yeah, the reality is everywhere I go almost every day that I’m outside of Carver Hawkeye Arena, I’m constantly bumping into people from yesteryear. And it’s like an episode of This is Your Life. I was at a charity event on Saturday, and I saw 20 people I haven’t seen in 20 plus years.

It was really neat. But the great thing for me is that this is the first program that I’ve come to. It’s the first place I’ve coached at where I am not delivering the message all the time of belief. But, rather, people keep delivering that message to me.

That’s a great feeling. And they’re not paying attention I haven’t done anything yet. I tease everybody here that I’m undefeated that’s why I’m all smiles. But that belief is really strong. It’s what we want to give our players all the time as coaches, that belief in them that they know that somebody out there believes in them. For me as a coach, knowing that I have so many in the community believing in me, that’s pretty strong. That’s a strong message.

So we’re going to capitalize on that. We’re going to count on those people to keep believing and keep supporting. I love hearing from people that I haven’t been to a volleyball match before. But I’m coming now. And I think, man, that’s awesome. That’s where it starts.

And there’s something brewing here, something that’s special.

Q. How important is it to you to recruit the best players in Iowa?
COACH SHYMANSKY: We are a sport that can build success on in state talent. Some sports may not be able to say that. Some sports may only be able to do it in part because of the number of players that they need or the size of player or whatever. We only recruit two or three kids a year. It’s not really that many.

When I think about it, I say, every year there are at least two or three top level Division I recruits in our state. And now we’ve got to go get them. That’s going to take a ton of work.

What I know is that the arms of the university, they reach out and hug people in our state pretty well. Everybody knows and understands what it means to be a Hawkeye.

We’re counting on surrounding our in-state kids the best we can, putting our best foot forward and getting them. It’s where we’re spending 80, 90 percent of our recruiting effort right now. We know that we can build a winner on in state kids.