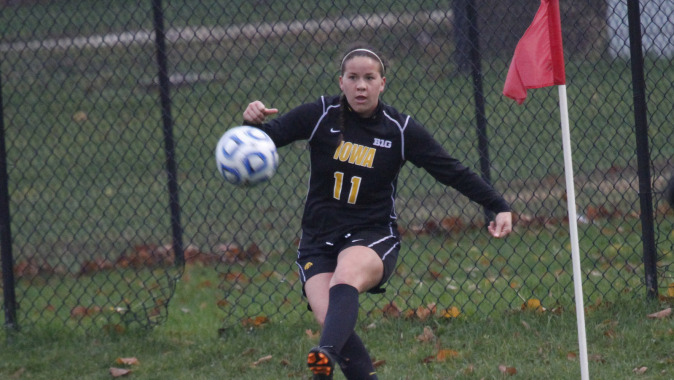 THE MATCH-UP
The University of Iowa soccer team opens its 2014 home schedule with a pair of matches at the Iowa Soccer Complex. The Hawkeyes open the weekend by hosting Fresno State on Friday at 7 p.m. (CT) before squaring off against Butler on Sept. 1 for a Labor Day showdown at 1 p.m.

PROMOTIONS
Friday’s game against Fresno State is “Back to School Day” at the Iowa Soccer Complex. The first 250 fans will receive free glow necklaces, posters, and schedule cards. Monday’s contest is being billed as “Dollar Dog Day.”

QUICK HITTERS
? Iowa opened the season with two consecutive wins for the fourth-straight season with victories over Northern Iowa (1-0, 2OT) and Illinois Chicago last weekend.
? The Hawkeyes have won 27-straight regular season nonconference games. Iowa went 8-0 in non-league games in 2011 and 2013 and 9-0 in 2012.
? Sophomore Bri Toelle and senior Cloe Lacasse gave Iowa a quick early advantage in its victory at Illinois Chicago, as the pair each scored a goal in a span of 47 seconds to give the Hawkeyes a 2-0 lead.
? Iowa is out-shooting its opponents, 42-17, in two games this season, which includes a 21-3 edge in shots on goal.
? Senior goalkeeper Kiley Beck is tops in the Big Ten in shutouts, after blanking both Northern Iowa and Illinois Chicago during the season-opening weekend. She is also tied for tops in the league in save percentage (1.000) and goals against average (0.00).
? Senior Cloe Lacasse is one of 11 league players with two goals in 2014. The Canadian also has a league-high 14 shots.

SCOUTING FRESNO STATE
Sixth-year head coach Brian Zwaschka and the Bulldogs (1-1) travel to Iowa City on Friday after suffering a 3-0 loss to Gonzaga at home last Sunday. Fresno State opened the season with a 2-1 overtime victory over Eastern Washington. Jaycee Bingham has scored the Bulldogs’ lone goal on seven shots, while Alyssa Wilson has made 10 saves in goal. Fresno State returns six starters from a team that finished 10-8-2 overall and 7-2-1 in the Mountain West Conference last season.

FRESNO STATE VS. IOWA — THE SERIES
Friday marks the first meeting in the all-time series between the two schools.

BUTLER VS. IOWA — THE SERIES
Monday’s contest will be the first ever between the two programs.

LAST GAME
Senior Cloe Lacasse scored two goals in a 4-0 victory over Illinois-Chicago on Aug. 24 in Chicago. Sophomore Bri Toelle and senior Melanie Pickert each added goals, their first of the season. It was the second-straight shutout for the Hawkeyes.

NEWCOMERS SHINE
? Freshman Katharine Woodruff got the Hawkeyes on the scoreboard in 2014 when she netted the game-winning goal in the 1-0 double-overtime win at Northern Iowa on Sept. 22.
? Freshman Aubree Larson tallied a pair of assists in Iowa’s 4-0 win at Illinois-Chicago. She is tops on the team and tied for third in the Big Ten in the category.

IOWA SEVENTH IN REGIONAL RANKINGS
Iowa is ranked seventh in the initial Great Lakes Region poll, released by the NSCAA on Aug. 26. Big Ten schools occupy the top seven spots and eight of the 10 spots in the rankings.

NONCONFERENCE DOMINANCE
Over the past three-plus seasons, Iowa hasn’t lost a regular season non-league game since the 2010 season. The Hawkeyes have compiled a 27-1 nonconference record during the stretch with the only blemish coming at No. 23 Notre Dame in last year’s NCAA Tournament.

SENIOR EXPERIENCE
Senior Melanie Pickert has started all 66 games of her Iowa career, while fellow seniors Caitlin Brown and Cloe Lacasse have started 65-of-66 games as Hawkeyes.

BECK SHINES IN GOAL
After playing five games in her first three seasons, senior Kiley Beck posted a pair of shutouts in her first two career starts. The Illinois native made a single save in Iowa’s 1-0 win at Northern Iowa before making a pair of saves in a 4-0 triumph over Illinois Chicago. Beck has a 0.00 goals against average in 195:24 minutes in goal with three saves this season.

MOVING ON UP
After her two-goal performance against UIC on Aug. 24, senior Cloe Lacasse is three goals from tying Kate Walse for second place on Iowa’s all-time goal list. Lacasse is also two points shy from tying Walse (88) for second in all-time points.

Lacasse led Iowa in goals scored, points, and shots taken in both the 2011 and 2012 seasons.

HAWKEYES ON TV
A total of five The Hawkeyes’ Sept. 25 home contest against Maryland will be broadcast live on BTN. The match will begin at 2:30 p.m. (CT). The BTN will also be televising the Big Ten Tournament from Nov. 5-9 in West Lafayette, Ind.

B1G IN THE POLLS
Penn State, Michigan, and Wisconsin are ranked in the latest NSCAA Top 25 poll of the 2014 season. Penn State is ranked No. 8 in the poll, Michigan came in at No. 10, and Wisconsin was voted No. 19.

NEXT UP
The Hawkeyes return to action Sept. 5, facing Iowa State in Ames, Iowa, in the opening game of the 2014-15 Iowa Corn Cy-Hawk Series. Iowa follows with a Sept. 7 road matchup at Colorado State.