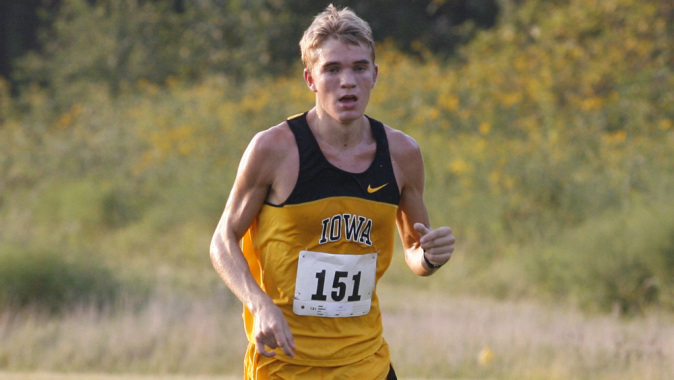 IOWA CITY, Iowa — Kevin Lewis and Layne Anderson did not have to sit down over a cup of coffee to share goals for the upcoming season.

It goes without saying… Lewis will continue to run until he crosses the finish line at the 2014 NCAA Cross Country Championships.

“Anything else would be terrible,” said Lewis, who is entering his fourth and final season as a Hawkeye. “I want to do everything. I want to go to every NCAA Championship, track included, and while I’m there, I want to become an All-American. This is my last opportunity.”

That is not breaking news to his new head coach. Anderson is in his first year with the Hawkeye men, but he’s not entering a situation typical of a first-year coach. He has been on the other side of the aisle coaching the Iowa women’s cross country team since 2003, and he has had an eye on Lewis since 2011.

“Kevin is coming off a great year,” said Anderson. “He missed the NCAA’s by seconds last season, and I think he feels like he is on the precipice of achieving that goal this year. Not going this year in his mind is not an option. He’d like to go as a member of the team, but at the very least, he’s focused on getting himself prepared.”

Lewis says his change in preparation has been minimal since Anderson took the stopwatch from former head coach Larry Wieczorek.

“Most everything is the same as what it used to be,” he said. “I haven’t been told to cut or increase my mileage, so in that aspect I feel like I continue to train like I have in the past.

“The biggest change is the style. Now workouts are based on effort, rather than time. In the past, we would try to get a little too competitive in practice and run fast the last few reps. Now we’re keeping it under control and not racing at the end. I think it will help us be faster at the end of the season.”

For Lewis, 2014 marks the beginning of an end. For Anderson, it marks another new beginning — for the first time since leading the Auburn men and women in 2002, he is at the helm of both men’s and women’s programs.

“It has been a nice merger between the men and women,” he said. “They knew each other before, but they’re getting to know each other better. There is more of a mix now.

“The men have jumped right in with an open mind. I haven’t seen anything that gives me reason to believe that they doubt what they’re being asked to do. Working together can prepare them for a high level of competition.”