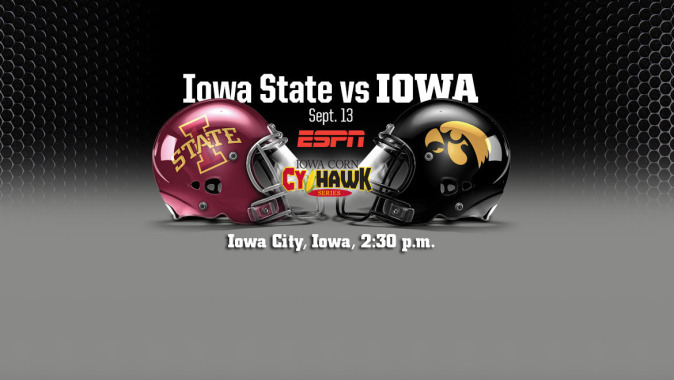 “It doesn’t take long to get used to the rivalry and not like them,” said Alston, who will be playing in his fourth installment of the Iowa Corn Cy-Hawk Series on Saturday inside Kinnick Stadium. “There are no secrets here.”

Alston says there isn’t a game on the Iowa schedule that compares to this rivalry. From the pregame hype to the fan interaction to the music being blasted throughout the football complex.

“In the complex, they start playing the (Iowa State) fight song to make you more angry,” he said. “They play it in the locker room, weight room… everywhere. You get tired of seeing Iowa State really quickly around here, and when you get to the game Saturday everything is let loose.”

Senior Kevonte Martin-Manley didn’t understand the rivalry when he arrived at the UI from Michigan in 2010. Now he knows the game is personal.

“(When I got here) I was told it is going to be a hard fought game. When I was younger, I didn’t understand it, but now I do. You can tell it is amplified when you get on the field. It’s a hard fought battle, just like it’s going to be this weekend.”

The last three games in the series have been decided by six points or less.

Rudock believes the passion shown for the rivalry is a testament to both team’s fan bases.

“It means we have great fans in Iowa across the state, whether it’s for Iowa or Iowa State,” he said. “The fans here are passionate about football and love these two teams.”

Even though it’s a “different” game week, Alston says when the teams ultimately take the field it will be business as usual.

Saturday’s game will kick off at 2:35 p.m. (CT), and it will be televised on ESPN with Sean McDonough, Chris Speilman, and Todd McShay on the call. The game is sold out.