Who Starts? Who Cares? 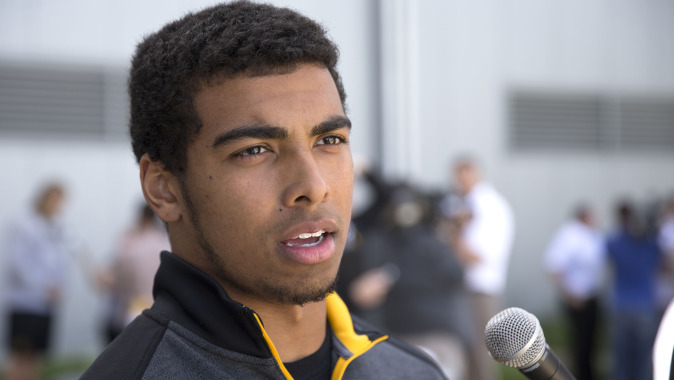 IOWA CITY, Iowa — There could be a small, trivial asterisk attached to the University of Iowa’s 24-20 football victory at Pittsburgh on Sept. 20.

It was on that day that junior Jordan Canzeri made his first start at running back for the Hawkeyes since the 2011 Insight Bowl. During the ensuing span of 28 games, Mark Weisman started at that position 20 times, Damon Bullock seven times, and Greg Garmon once.

“Not so much,” Canzeri said.

“No,” he added. “It’s not who’s starting and who isn’t. I was able to be the first to get carries and feel out the defense. It wasn’t much of a new, crazy thing to me, but I’m ready to take that responsibility.”

Canzeri opened the Pitt game with a 2-yard run and had attempts on four of the first five rushing plays. He finished with eight carries for 23 yards. Weisman gained 88 yards on 22 attempts with two touchdowns.

“It’s about who is making plays and getting the hot hand,” Canzeri said. “Mark did great during the game, that’s why he got the majority of the carries. We know that going into each game that whoever has the hot hand is going to get the ball.”

Canzeri’s only previous start was against Oklahoma in the Insight Bowl. He led Iowa with 58 rushing yards on 22 carries and caught six passes for 28 yards and a touchdown.

As exciting as that postseason performance was, Canzeri registered his only collegiate 100-yard rushing effort Nov. 9, 2013, at Purdue. The Hawkeyes return to Ross-Ade Stadium on Saturday.

“It was a great feeling having the performance I did, but it was a credit to the offensive line and (quarterback) Jake (Rudock) for the checks he made,” Canzeri said. “Even though I was told I had a great game, I expected a lot more. I’m ready to do more than last year if I get that opportunity.”

Last season against the Boilermakers, Canzeri carried the ball 20 times for 165 yards and a 2-yard touchdown run that gave the Hawkeyes a 7-0 lead. Iowa went on to pick up 318 yards on the ground and 191 through the air.

This season Weisman leads the team with 54 carries, 184 yards, and four touchdowns. Canzeri has 23 attempts for 89 yards; Bullock has carried the ball 20 times and leads the backs with 15 pass receptions; sophomore LeShun Daniels, Jr., compiled 12 carries in the first two games.

No one in the UI offensive backfield is looking for the spotlight. Weisman jokes that he will let Canzeri take outside zone running plays if they are called. Canzeri tells Weisman that third-and-1 attempts are all his.

“It’s great to have the relationship we have,” Canzeri said. “We’re both ready, and it’s good that we’re all humble, no one is selfish.”

Iowa has won five of its last six regular-season games away from Kinnick Stadium, including three in a row. The consecutive win streak began a year ago at Purdue.

“You always want to win on the road,” Canzeri said. “You want to win every game, but it’s especially tough on the road because you have the harsh environment and (most of the) fans are against you.”

Kickoff is scheduled for 11:01 a.m. (CT) and the game will be televised by BTN with Scott Graham, Stanley Johnson, and Evan Fitzgerald calling the action.

Whether Canzeri, Weisman or any other Hawkeye back is getting the bulk of the playing time is insignificant as long as Iowa improves to 4-1 overall.

“If it’s someone else getting the ball and they’re having that breakout game, then we’re all happy,” Canzeri said. “We want the offense to move, get the job done, and score points.”