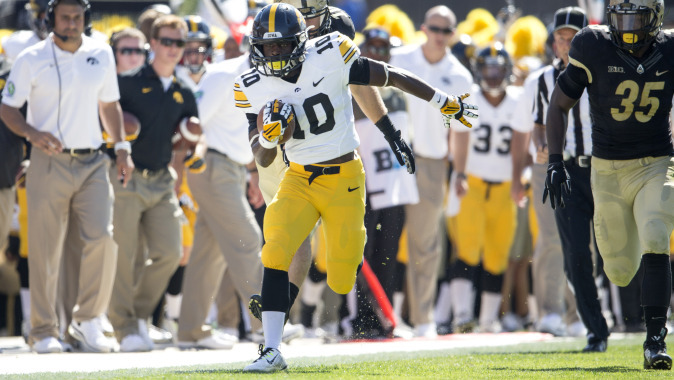 Senior running back Mark Weisman became the seventh player in school history to surpass 2,000 yards rushing with 20 or more touchdowns.

But it was a UI rookie — redshirt freshman Jonathan Parker — who led the Hawkeyes in all-purpose yards.

Parker had a 47-yard kickoff return, two catches for 43 yards, and one carry for four yards for a total of 94.

“It means I’m getting better every day,” Parker said. “Keep working and I hope to do that for the rest of my life.”

Weisman led the Hawkeyes on the ground with 76 yards and two touchdowns. He now has 2,050 career rushing yards and 22 rushing touchdowns.

Martin-Manley led the Hawkeyes through the air with five catches for 74 yards and a touchdown. His 148 career receptions are 26 from a school record.

And a new kid on the block continues to grow as Iowa reached a bye week in its schedule with a record of 4-1 overall, 1-0 in the Big Ten.

Parker’s speed makes him an asset to the Hawkeye offense whether it is as a decoy or a go-to guy. On this day, Iowa rolled to 420 yards in typically balanced fashion — 245 through the air and 175 on the ground. Parker is gradually evolving into a triple threat who can catch, return, and then there is his specialty — run.

Late in the second quarter, UI sophomore quarterback C.J. Beathard threw a pass toward Parker. The ball was tipped, Parker hauled it in, made a defender miss, and sprinted down the Hawkeye sideline for a 34-yard gain. It set up a game-tying 28-yard field goal by Marshall Koehn.

“The most impressive play he made, in my opinion, was that catch off the tip,” UI head coach Kirk Ferentz said. “That was not routine. Not only did he make the catch, but then he made a heck of a run after.”

Like most young football players, Parker, a 5-foot-8, 180-pounder from St. Louis, needed to — as his head coach often says of underclassmen — ride the roller coaster. In his first collegiate game he had an explosive 21-yard run against Northern Iowa. The next week he lost two fumbles against Ball State.

“I have been through a lot in my life that I had to get over, so I looked at (the Ball State game) as one of those situations,” Parker said. “Just persevere.”

His progress on the practice field has earned him more snaps on the game field.

“I felt my performance was OK (at Purdue). It was a good feeling to get into the game because I haven’t been in there like I was today,” Parker said. “It’s a good experience. When I got in there I did well, and coach decided to put me in a little more.”

Parker has two weeks to progress before the Hawkeyes take the field again Oct. 11 against Indiana in Kinnick Stadium.

“For me I want to get better every day,” Parker said. “As a team, we want to keep going to get to the championship and be No. 1.”

When the Hawkeyes left Ross-Ade Stadium, they took an undefeated league record with them. They can’t do any better than that.