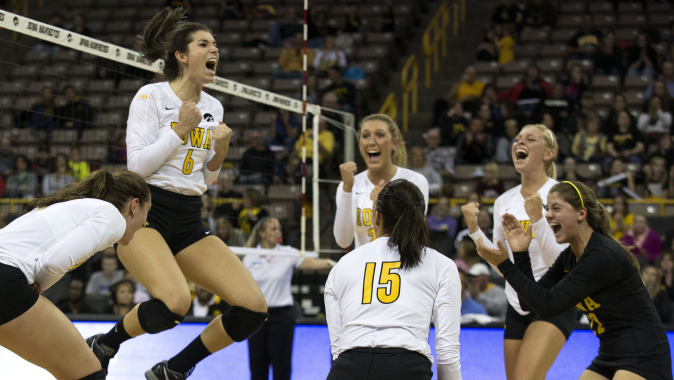 WEEKEND PREVIEW
The University of Iowa volleyball team hits the road for a pair of Big Ten competitions at Michigan and Michigan State, Oct. 10-11. The Hawkeyes face Michigan on Friday and Michigan State on Saturday. Both matches begin at 6 p.m. (CT). Saturday is Breast Cancer Awareness night for the Spartans in East Lansing, Michigan.

FOLLOW ALONG
Hawkeye volleyball fans can listen live to each match online through Hawkeye All Access. Tim Keating is on the call. Gametracker (live stats) is also available for each match. Links to Hawkeye All Access and Gametracker are available on the volleyball schedule page of hawkeyesports.com. Video of the match at Michigan State through Spartan Sports Network can be accessed for a fee at msuspartans.com.

FEELING THE LOVE
After spending the first month of the season on the road, the UI volleyball team has enjoyed a pair of top 20 crowds at home in Carver-Hawkeye Arena. The fourth-largest crowd in program history (2,631) attended the home opener against Nebraska on Sept. 27, and the 13th-largest crowd (1,723) attended the Hawkeyes’ match against Penn State on Oct. 11.

SWITCHING IT UP
After running a 6-2 offense, the Hawkeye volleyball team transitioned into a 5-1 offensive system against Ohio State and Penn State last weekend. Freshman setter Kaylee Smith earned the first starts of her Iowa volleyball career, dishing out 26 assists against the Buckeyes and 17 against the Nittany Lions.

APPROACHING A MILESTONE
First-year head coach Bond Shymansky owns a career record of 298-116 (.720) and is just two wins from logging his 300th career victory. This is his 13th season as a head coach. He spent the past five seasons (2009-13) at the helm of the Marquette volleyball program and seven seasons before that leading Georgia Tech (2002-09).

ON DECK
Iowa volleyball resumes Big Ten play in Iowa City with two matches next week. The Hawkeyes face Illinois on Wednesday at 8:05 p.m., and Northwestern on Saturday at 7 p.m. on Mediacom Court in Carver-Hawkeye Arena. The match against Illinois will be televised live on the Big Ten Network.