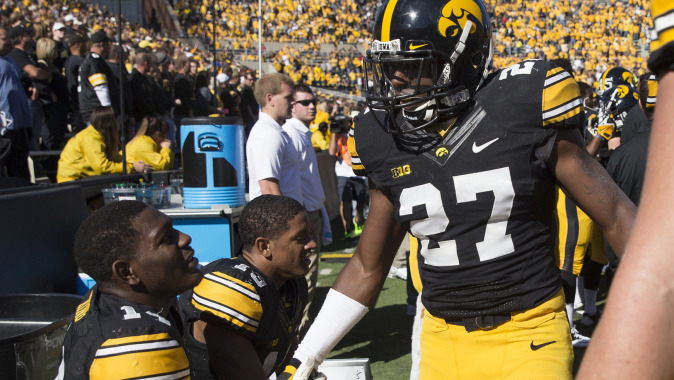 IOWA CITY, Iowa — If University of Iowa free safety Jordan Lomax ever aspired to work in a football ticket office, he is gaining an unplanned internship this week.

Lomax is from Upper Marlboro, Maryland — a 35-minute drive from DeMatha High School, where he graduated, and the University of Maryland in College Park, Iowa’s opponent on Saturday.

Lomax used all day Monday and early Tuesday securing nearly 70 tickets for family members to attend the first-ever football meeting between Iowa and Maryland on Oct. 18 at Capital One Field inside Byrd Stadium.

“I try to take care of any family situations at the beginning of the week so my focus now is strictly on preparing for Maryland,” Lomax said Tuesday before practice in the UI Indoor Football Practice Facility. “When the time comes for the game, family won’t be a distraction — it will be executing my assignments when I am out on the field.”

Lomax came up with his first career interception Oct. 11, putting a finishing touch on the Hawkeyes’ 45-29 victory over Indiana. He is one of seven UI football players from the state of Maryland.

“When Maryland came into the Big Ten Conference and I saw the schedule, I thought it would be pretty cool to have a chance to play in front of my family,” Lomax said.

He is also familiar with “a handful” of Terrapin players.

“You always want to go out there and get the win, but it is more special to get a win against your friends,” Lomax said.

Lomax was recruited by Maryland and at one point verbally committed to Virginia. His father, Earnest, told him to base his college decision on his best interests; his mother, Pamela, didn’t want him going far from home. It was the University of Iowa, Lomax said, that gave him the best opportunity to reach his academic goals, while also playing against the best football competition in the nation.

How did mom react to the decision?

“It grew on her and she likes the fact I came out here,” Lomax said. “She likes my decision.”

“It’s us expanding eastward and hopefully that will make it easier for prospects out in the region to be enthused about playing in the Big Ten,” UI head coach Kirk Ferentz said. “We’re always looking to recruit different places. Does it make sense for us to try here and try there? (Maryland) felt like a place where we have connections and that’s good football out there.”

Iowa has won six of its last seven road games, including both of its contests away from Kinnick Stadium this season. The Hawkeyes enter the game 5-1 overall, 2-0 in the Big Ten Conference; Maryland is 4-2, 1-1.

Following the game, Lomax will have about 35 minutes to talk with family before flying back to Iowa. The reunion will be nice, he said, but another victory will feel even better.

“I’m looking forward to getting the W most of all,” Lomax said. “That’s the most important thing — playing good, sound team football.”