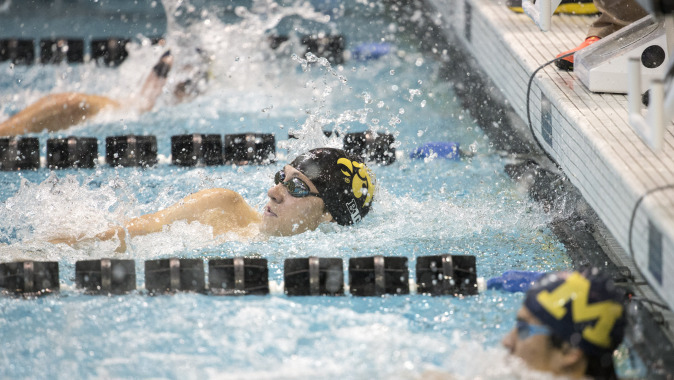 THIS WEEK
The University of Iowa men’s swimming and diving team hits the road squaring off with Michigan State in East Lansing, Michigan at 3 p.m. (CT)

LIVE RESULTS
Fans can follow the weekend’s action via live results on the “Meet Mobile” swim meet application on cell phones and tablets. Download the application at this link: http://www.active.com/mobile/meet-mobile-app

LOOKING AHEAD
The Hawkeyes return to action Oct. 31, on the road taking on Minnesota in Minneapolis, Minnesota.

A STRONG RESUME
Freshman Jerzey Twarowski joins the Hawkeyes following a strong junior career in Poland. Twarowski was a member of the Polish Junior Nationals team, where he was a multiple gold medalist in international junior competitions. The butterfly specialist was also a Senior National qualifier in 2014, earning gold and bronze medals at the Polish Senior Championships.

A LONG WAYS FROM HOME
This year’s team will feature three Hawkeyes from overseas. Jerzey Twarowski comes to the UI program from Krakow, Poland, Roman Trussov from Ust-Kamenogorsk, Kazakhstan, and David Ernstsson from Stockholm, Sweden.

SEASON RECAP
The Hawkeyes enter the 2014-15 season after posting a 2-9 dual meet record in 2014, including a 1-6 mark in Big Ten meets. Iowa finished the season with an eighth-place finish at the Big Ten Championships.

DONATELLI RETURNS
Redshirt junior Brian Donatelli returns to add depth to the Iowa sprinters after missing the 2013-14 season with an injury. The Illinois native led the team in the 50-free as a sophomore with a time of 20.23 seconds.

TRUSSOV LEADS BREASTSTROKERS
Junior Roman Trussov returns to lead the Iowa breaststrokers in 2014-15. The Kazakhstan native qualified for the NCAA Championships in both the 100 and 200 breaststroke as a freshman. He currently is the Iowa school record holder in the 200 breaststroke (1:55.84) while holding the second-fastest time in the 100 breast (53.60).