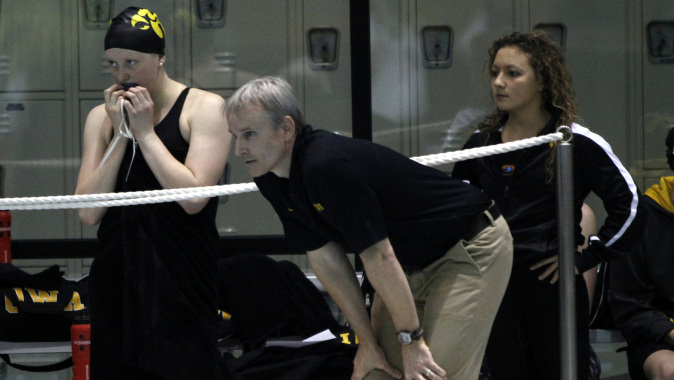 This Week
The University of Iowa men’s swimming and diving team hits the road squaring off with Michigan State in East Lansing, Michigan at 3 p.m. (CT)

Live Results
Fans can follow the weekend’s action via live results on the “Meet Mobile” swim meet application on cell phones and tablets. Download the application at this link: http://www.active.com/mobile/meet-mobile-app

Looking Ahead
The Hawkeyes return to action Oct. 31, on the road taking on Minnesota in Minneapolis, Minnesota at 5 p.m. (CT).

Scouting Michigan State
The Spartans have 14 new faces on the squad this season. However, MSU does have a large core of returners to lean on. The Spartans finished 11th at the Big Ten Championships a season ago. Senior Shelby Lacy and Junior Marina Borri return to the roster coming off strong seasons and look to lead the way in 2015.

North of The Boarder
This year’s team will feature one Hawkeyes from Canada. Redshirt senior Lauren Kelba comes from Calgary, Alberta.

Season Recap
The Hawkeyes enter the 2014-15 season after posting a 9-5 dual meet record, including a 4-2 mark in Big Ten meets. Iowa finished the season with a 8th place finish at the Big Ten Championships.

Off The High Dive
The Iowa diving team returns a vetern lineup, led by a trio of redshirt senior s — Abby Grilli, Joelle Christy, and Lauren Kelba. Grilli led the Hawkeyes in three-meter diving last season with a score of 336.97. Christy led the team on one-meter diving with a score of 319.45, and Calli Head led the Hawkeyes in platform diving. Grilli and Christy qualified for NCAA Zone Diving last season. Christy fell just short of maiking the finals placing 21st. Grilli earned an 11th place finish in the finals with a score of 3.7.25.

Academic Honors
11 members from the 2013-14 women’s team were honored by the Big Ten Conference with the Distinguished Scholar Award. The team was acknowledged as an All-America team for the 10th consecutive year. In all, 35 women have been named to the CSCAA Scholar All-America list during coach Long’s tenure.

Iowa Swimming And Diving Tradition
Iowa was one of the first schools in the nation to compete on a collegiate level and competed at the first NCAA Championship. From 1937 to 1960, Iowa placed in the NCAA top 10 18 times, crowning nine NCAA and 22 Big Ten champions.