American Football, Across the Pond 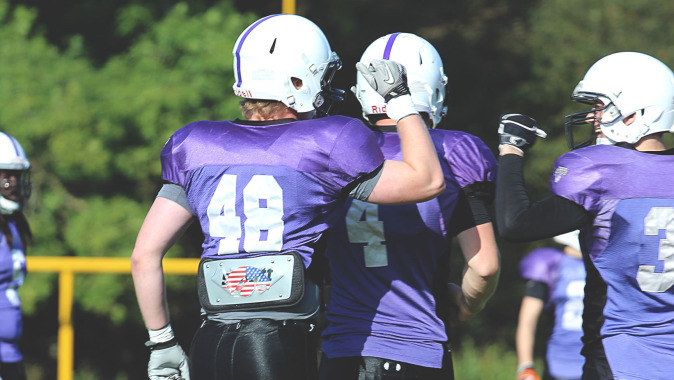 IOWA CITY, Iowa — While the University of Iowa football team is off on its second bye week of the 2014 season, former Hawkeye linebacker Palmer Foster is preparing to play, and coach, football this week… across the pond.

Foster earned a scholarship to Durham University in Durham, England, to work on a master’s degree and to play and coach football, or as it is known there, ‘American football.’

“For Durham University, they have a head coach listed for insurance purposes, but other than that, they don’t list an actual coach,” said Foster. “Their philosophy is, why not bring American college athletes over that are interested in getting a world-class master’s degree to play and coach?”

Foster is doing just that.

“It’s funny because whenever people ask me about the experience, I have to take a step back and think about it because with that Iowa football mentality, you think, ‘take care of the day that you’re on and don’t worry about tomorrow until you’re there,'” said Foster. “When I take a step back, it’s kind of crazy to think I am in England, not only to play, but to coach. There are players trusting me, so it’s very humbling and eye-opening to realize what I’m setting out to do.”

Coaching is a path he has set his eyes on.

“When I was at Iowa, I was looking into coaching and after the Outback Bowl, I tried pursuing a graduate assistant spot somewhere, but it was difficult to find with limited experience,” said Foster. “This is a nice way to bridge the gap between playing and coaching.”

As a Hawkeye, Foster played behind three names that may ring a bell: Anthony Hitchens of the Dallas Cowboys, Christian Kirksey of the Cleveland Browns, and James Morris of the New England Patriots.

“Unfortunately, I didn’t play a whole lot at Iowa, but I had the experience to play with three guys that are in the NFL,” said Foster. “Playing in Europe will give me a lot of experience and will hopefully translate into being a better coach when that time comes.”

Foster used his experiences at Iowa in a positive fashion.

“Palmer spent a great deal of time studying opponents during the game week,” said LeVar Woods, linebackers coach at Iowa. “He used the knowledge he gained throughout the week to help coach his teammates on the sidelines during games. Palmer excelled at recognizing opponent tendencies throughout the game and relaying that information to the coaching staff between defensive series. These experiences will help make Palmer a very good football coach.”

“I’ve talked to my position coach (LeVar Woods) a handful of times about what we’ve been doing,” said Foster. “A year ago I’m learning from him, and now I’m off on my own, and I’m trying to repeat what he’s done for me.”

Palmer has football, and black and gold, in his blood. His father, Jim, ran track at Iowa and is the founder of the Arena Football League, and his grandfather, Pat, played football at Iowa.

No matter what colors Foster is sporting across the Atlantic or in future coaching attire, Palmer will always bleed black and gold, and red, white, and blue.

“I’ve got my American flag Tigerhawk sticker that we wore for the Veteran’s Day game on our helmets,” he said. “You can’t take the Iowa out of me.”