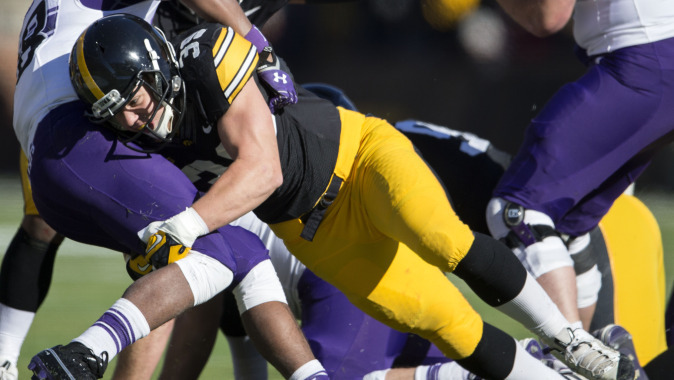 IOWA CITY, Iowa — University of Iowa junior linebacker Travis Perry had a mission to accomplish before leaving the locker room after a 48-7 victory over Northwestern on Nov. 1.

Perry started at middle linebacker against the Wildcats — the second start of his career. He tied a career high with five tackles and earned his first sack.

There were cheers, hugs, high fives, and smiles in the victorious home locker room. Then Perry quietly peeled a keepsake from the right side of his helmet: a camouflage Tigerhawk decal he will present to his father.

It is a story first told in July. Perry’s father, Russ, began a tour in Afghanistan and is expected to return home to Urbandale, Iowa, in April, 2015. Russ flies C-12 Beechcraft King Air aircraft in the Army National Guard and will miss his son’s entire junior season as a football player for the Hawkeyes.

Since the game against Northwestern was Iowa’s last at home before Veteran’s Day (Tuesday, Nov. 11), the football program altered the look of its helmets in honor of members of the military. The camouflage logo was in recognition of men and women in all branches of the military who are serving, or have served, the United States of America. The left side of the helmet was left black in honor of those who gave their lives in the line of duty.

“We’re just out here playing a game of football and those men and women are putting their lives on the line day-in and day-out for our freedom,” Perry said. “That’s what it’s all about. I want to say thank you to all our soldiers, and it was nice to be able to honor them a little bit (Saturday).”

Perry began the season at outside linebacker but moved to middle a couple weeks ago. He found out early in the week that he would start the key game against Northwestern. The Hawkeyes dominated with 483 total yards while allowing 180. Iowa sacked starting Wildcat quarterback Trevor Siemian five times — once by Perry for an 8-yard loss on the first series of the second half. It was a straight shot at the quarterback for Perry.

What was the thought process for the 6-foot-3, 232-pound former walk-on?

“Don’t miss,” Perry said with a laugh. “Coach put us in a great position by making that call, our defensive line executed what we were supposed to be doing, and it worked out.”

Perry and senior Quinton Alston are veterans among Hawkeye linebackers. Freshman Bo Bower has eight starts at outside linebacker and another freshman, Josey Jewell, is seeing increased playing time.

“Q has done a great job this season leading and I’m trying to help him lead,” Perry said.

Alston tops the team with 60 tackles. Sophomore Reggie Spearman, who will sit out two games for violating team rules, has 34 stops, followed by Bower (21), and Jewell and Perry (13).

Although Russ Perry couldn’t be among the 66,887 inside Kinnick Stadium on Saturday, he watched the game with a group from his base. Those 11 a.m. kickoffs in Iowa mean an 8:30 p.m. start in Afghanistan.

On average — and depending on Russ’s missions, Perry communicates with his father every other day via Facebook.

Hawkeye players were unaware that their helmets would have a new look until they arrived at Kinnick Stadium early Saturday morning. Perry called the gesture neat, significant, and awesome. Someday soon, Russ will clutch a game-worn keepsake from his son.