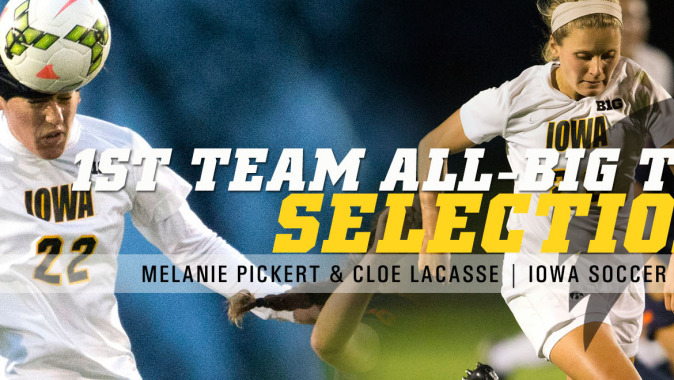 The duo is the first pair in Iowa history to earn first-team honors in the same season, and they are just the second and third Hawkeyes all-time to garner first-team recognition. Sarah Lynch was a first-team honoree from 1999-2001.

“Cloe and Melanie are very deserving of earning first-team all-conference recognition,” said UI head coach Dave DiIanni. “This is a reflection of our team success this season and how much work the team put in for them.”

Lacasse earned her second career All-Big Ten accolade after leading the team in goals (11), assists (six), and points (28) in 2014. The forward scored a pair of game-winning strikes and had four two-goal games as a senior. The Sudbury, Ontario, Canada, native was a second-team All-Big Ten selection in 2013 and earned Big Ten All-Freshman honors in 2011.

Pickert also garnered her second career All-Big Ten honor after netting seven goals in 2014, including four game-winning strikes, which are tied for the third-most in the league. The defender was also a key cog on a Hawkeye defense that has tied a school record with 10 shutouts and limited opposing teams to 16 goals in 19 games. Pickert was a second-team All-Big Ten selection in 2013.

Senior defender Caitlin Brown was Iowa soccer’s Big Ten Sportsmanship Award honoree. The distinction is presented to student-athletes who display sportsmanship and ethical behavior, are in good academic standing and demonstrate good citizenship outside of athletics.

The Hawkeyes ended the regular season with a 12-6-1 overall and 7-5-1 Big Ten record, giving the team its third top-five conference finish since 2011. The Hawkeyes’ seven Big Ten wins are tied for the most in a single season in program history.

Iowa, the fifth seed, opens Big Ten Tournament play Wednesday at 9:30 a.m. (CT) against No. 4 seed Rutgers. The game will be held at the Boilermaker Soccer Complex in West Lafayette, Indiana, and it will be streamed live on BTN Plus on BTN2Go.