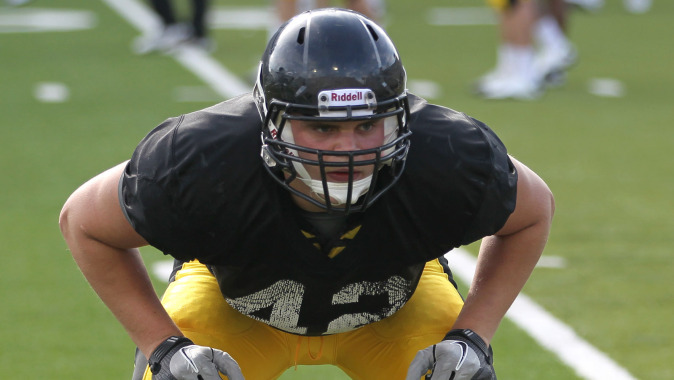 Plewa missed four of Iowa’s first eight games because of a shoulder injury.

“It’s unfortunate he was hurt,” said senior running back Mark Weisman. “Now he’s back and is healthy. He’s knocking people back, and that’s what we want. That’s what we need as a football team to be a power running team.”

Plewa paved the way for a season-high 221 rushing yards in the Hawkeyes’ 48-7 victory over Northwestern on Nov. 1. Iowa had its first 100-yard rusher in 10 games when redshirt freshman Akrum Wadley finished with 106 yards on 15 carries, and the team averaged nearly five yards a carry.

“It’s good to have him out there,” said Weisman. “He’s a veteran, played last year, and knows what he’s doing. He makes big blocks, gets us fired up, and that’s good to have.”

Weisman finished the game with a season-high 94 yards and three touchdowns with all but one of his carries coming in the first half. The effectiveness of Iowa’s rushing attack opened the door for the Hawkeye passing game to look as in sync as it has all season.

“A lot of (passing game’s success) comes from the running game,” said sophomore Matt VandeBerg, who had a career-high five catches for 90 yards against Northwestern. “Akrum came in and ran wild, and Mark was plugging away runs.

“When that happens, it opens up the passing game, and because we hit some deep balls then they have to play back and respect us, and then we hit them with some runs. It’s a combination of the entire offense doing what we need to do.”

Weisman says the success of the power rushing attack opens up the offense, and it needs to continue this week against a Minnesota defense that has given up an average of 144 rushing yards per game.

As a whole, the Gophers rank eighth in the Big Ten in total defense, giving up 351.6 yards per game. Minnesota defensive unit is built on speed, which is centered around senior Damien Wilson. The linebacker is second in the Big Ten with 86 tackles, averaging 10.8 per game.

“They’re a strong defense and are solid all around,” said Weisman. “They tackle and play well. It will be a big challenge, we just have to go out and give it our all.”

Saturday’s game will kick off at 11:01 a.m. (CT) from TCF Bank Stadium in Minneapolis. The game will be televised on ESPN2 with Beth Mowins, Joey Galloway, and Paul Carcaterra on the call.