Nothing to Lose, Everything to Gain 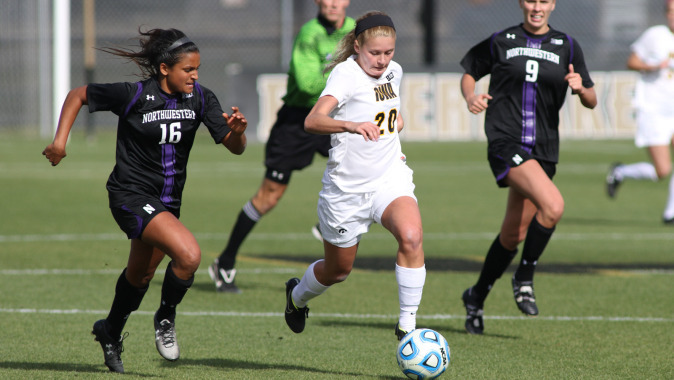 WEST LAFAYETTE, Ind. — The University of Iowa soccer team is playing with nothing to lose and everything to gain.

The Hawkeyes posted a 1-0 victory over eighth-seeded Northwestern on Friday to advance to the Big Ten Tournament championship game for a second-straight year. The win sets up a title game tilt against second-seeded and 11th-ranked Wisconsin on Sunday at 2 p.m. (CT).

Iowa is fighting for its NCAA Tournament life.

A victory would give the Hawkeyes an automatic berth into next week’s NCAA Tournament; a loss likely ends the team’s season.

“Every game, we’re putting everything on the line because we know we have nothing to lose,” said senior Cloe Lacasse. “We keep going for it because we don’t know when we will be playing our last game.”

It’s that fact that has UI head coach Dave DiIanni stressing to the importance of enjoying the moment and doing everything in their power to play on.

“We’re playing for something really special. We’re playing for an opportunity to win a championship, extend our season and play in the NCAAs. That’s what is driving this motivation to continue this as long as possible.”

For the Hawkeyes to be hoisting the championship trophy, it will take a complete team performance.

“It’s going to be a tall order,” said DiIanni. “Wisconsin is a very good team, one of, if not the best attacking team in the conference. They’re good defensively as well. It’s going to take the same effort and energy put together physically and tactically that we’ve been doing the last few games.

“We also need to play better in terms of when we have the ball, building out of pressure, and making Wisconsin have to defend us.”

The Badgers are 17-2-2 overall this season and 6-0-2 since Oct. 8, allowing one goal during the eight-game stretch. Wisconsin downed No. 6 seed Minnesota on Friday, 1-0; the Hawkeyes and Badgers played to a scoreless draw Oct. 8 during the regular season in Madison.

“We need to maximize what we do well,” said senior Caitlin Brown. “We need to limit Wisconsin’s chances and do whatever we can to win the game because we don’t want to go home with second place finish again, that’s for sure.”

Iowa advanced to the school’s first Big Ten Tournament title game last season, where it dropped a 1-0 decision to top-seeded Nebraska. The Hawkeyes are the first Big Ten team since Illinois (2011, 2012) and the fourth program in league history to be a tournament finalist in consecutive seasons.

“We had the jitters and butterflies (last year), and they’ll be here this year, too, but now we know what to expect,” said Lacasse. “That’s something that is valuable.”

“We’ve been there before, but we want the result to be different this year,” said senior Emily Scott. “With everything that has happened this year, everyone believes in our team so much and knows there is nothing stopping us from winning except ourselves.

“We’re excited to get back to the championship game and get the result we want.”

Sunday’s game will begin at 2 p.m. (CT) from the Boilermaker Soccer Complex in West Lafayette, Indiana. The game will be televised live on BTN.