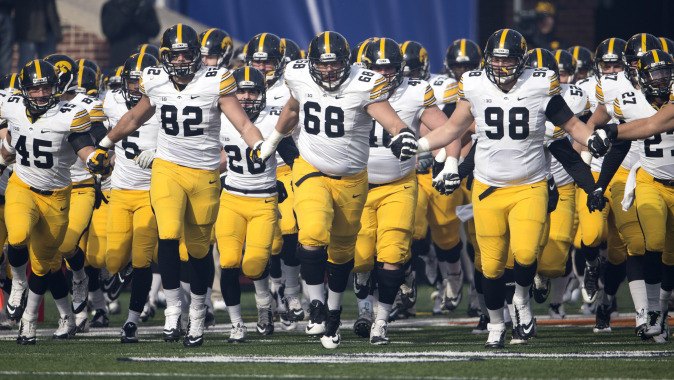 IOWA CITY, Iowa — There is hype and anticipation surrounding the University of Iowa football team’s Nov. 22 game against No. 14 Wisconsin, but the Hawkeyes are focused on staying humble and hungry.

“We can’t let that get to us,” said senior wide receiver Kevonte Martin-Manley. “We have to prepare like any other week. With us knowing how important it is and the magnitude of the game, that’s going to ramp it up for us.”

Saturday’s game has a 2:36 p.m. (CT) kickoff from Kinnick Stadium, and it will be nationally-televised on ABC with Dave Flemming, Chris Speilman, and Todd McShay on the call.

“You have to love it,” said senior linebacker Quinton Alston. “ABC game… 2:30 p.m…. a great team coming to Iowa City; you have to love these opportunities and make the most of it. I can’t wait for it.”

The Hawkeyes have their eyes on the Big Ten prize, which is a berth to the league championship game Dec. 7 in Indianapolis.

“We talk about it amongst each other because that’s what we’ve been working for since the bowl game,” said Martin-Manley. “We know how close we are, and we feel we can do it.”

The Badgers sit atop the Big Ten West Division standings with an 8-2 overall and 5-1 league record, one game ahead of Iowa, who is 7-3, 4-2. The Hawkeyes need home victories over Wisconsin and Nebraska to close out the regular-season and a loss from Minnesota to advance to championship Saturday.

“We worked all year to have meaningful games in November, and this is a huge game,” said senior safety John Lowdermilk. “It’s a big challenge for us, but if we prepare and practice well, we’ll be successful on the field this weekend.”

The Hawkeyes are underdogs against a Wisconsin team that boasts the nation’s top defense, allowing 244 yards per game, and has an offense that averages 39 points with a Heisman Trophy candidate in running back Melvin Gordon — the nation’s top rusher.

The role fits the Hawkeyes.

“We play better as the underdog,” said Lowdermilk. “I don’t know if it’s a certain mindset, but I like going into this game as the underdog with a chip on your shoulder and playing like you have something to prove.”

“(Being an underdog) is the type of program we are,” said Martin-Manley. “We’re built on being underdogs in recruiting. We’re confident in the talent we have, and we know how hard we play. We feel good about our chances.”

The first three weeks of November has been a rollercoaster for the Hawkeyes. Iowa opened the month with a 48-7 victory over Northwestern on Nov. 1, lost 51-14 at Minnesota on Nov. 8, before downing Illinois, 30-14, last weekend in Champaign.

“We’ve been on both ends of the spectrum,” said Martin-Manley. “We know what we have to do now.”

Through the ups-and-down, Iowa is where it wants to be, right in the thick of the Big Ten race.

“Weeks like this when all the hype is around here, you hear outside voices,” said Alston. “We need to stay humble-minded and hungry and make sure nobody is going out there trying to be Superman on any given play.

“We have to make sure we know and execute our assignment and know what we’re supposed to do on every given play. If we do that, we’ll be fine.”