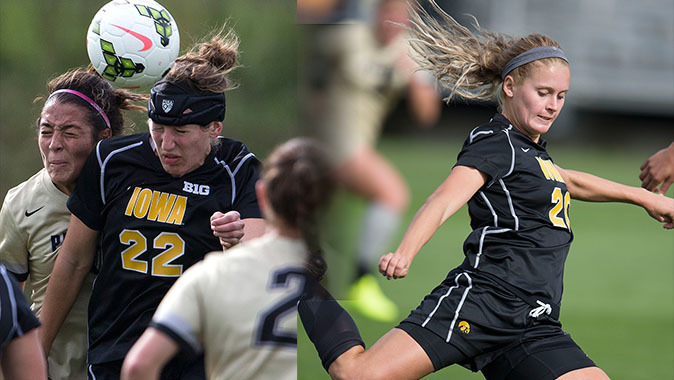 Lacasse, a first-team All-Big Ten selection, led the team in goals (12) and points (30), while ranking second on the squad with six assists in 2014. The forward fired off a school-record 82 shots and scored three game-winning goals, including a strike in the 1-0 Big Ten Tournament semifinal victory over Northwestern, sending the Hawkeyes to the Big Ten Tournament final for a second-straight season.

The Sudbury, Ontario, native finished her career with three of the top-five single-season goal and three of the top four point totals in Iowa soccer history. Her 112 career points are tied for the most in program history, and she finished second in goals (43), game-winning goals (13), and assists (26), and first in total shots (306).

Pickert, who was a first-team All-Big Ten selection and a fourth-team All-America honoree by College Sports Madness, finished the 2014 season with 15 points off seven goals and one assist. The defender started the first 20 games of the season, helping Iowa to a school-record 12 shutouts — before suffering a season-ending injury in the Big Ten Tournament quarterfinal victory over No. 23 Rutgers.

The Canton, Michigan, native started the first 84 games of her Iowa career, and she finished with 15 goals and 10 assists for 40 career points.

Iowa finished with a 14-7-1 overall record under first-year head coach Dave DiIanni with the 14 victories being the second-most in a single season in program history. The Hawkeyes tied a school record with seven Big Ten wins and tallied their third top-five league finish since 2011.