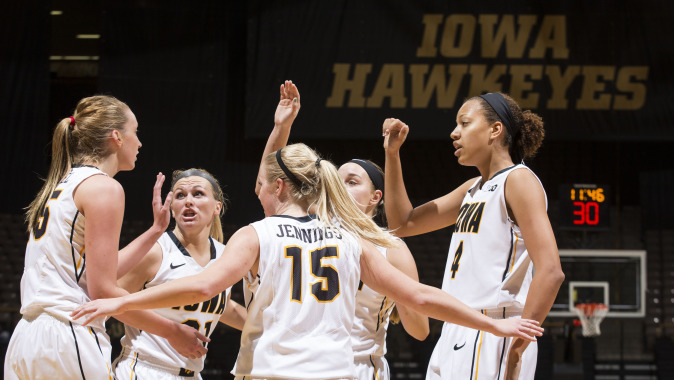 IOWA CITY, Iowa — The 19th-ranked University of Iowa women’s basketball team will be ready for conference play when it rolls around Dec. 28 because of its intense nonconference schedule.

Iowa is in the midst of a stretch where it plays Dayton, UNI, Arkansas, Gonzaga, No. 7 Louisville, Colorado, Iowa State, and Drake leading into its conference opener against Penn State at Carver-Hawkeye Arena.

Dayton (22nd), Arkansas (25th), Gonzaga (24th), Louisville, and Iowa State (receiving votes) have all been ranked or receiving votes at some point this year, while the Panthers and Bulldogs were picked to finish second, and third, respectively, in the Missouri Valley Conference.

“The next three before finals (Louisville, Colorado, Iowa State) are pretty tough; on the road at Louisville, and then hosting two good teams from the Pac-12 and Big 12,” said UI head coach Lisa Bluder. “This is an important stretch for us to prepare for our Big Ten schedule, to get better and hopefully get some quality wins that will help with the selection committee.”

The Big Ten Conference has five schools ranked in this week’s USA TODAY Top 25 Coaches Poll, second only to the SEC (six).

Iowa is not looking ahead, but instead looking to take care of business, one game at a time.

“It’s a lot of games in a short amount of time so it’s important for the team to stay together,” said senior Melissa Dixon. “It’s great for our team to have so much experience with understanding as to how these weeks work. It’s important to take it one game at a time. If you look too far ahead you’ll just get overwhelmed.”

“We are taking it one day and one game at a time,” said sophomore Ally Disterhoft, Iowa’s leading scorer, averaging 16 points a game. “This is an important stretch, and we’ve played a lot of games in a short amount of time. Every day in practice we’re coming in focused and preparing the scout for our next opponent.

“We’re excited for this opportunity to play at Louisville; they’re a great team.”

Iowa has faced the Cardinals once in program history… last year in the Second Round of the NCAA Tournament.

“We’re better prepared with the experience of having played them once already,” said Disterhoft. “We know a little bit of what they’re going to throw at us. We know what we’ll have to focus on and we’ve been doing that in practice. The preparation is there, we have the extra experience, and we’ll be ready to go come Thursday.”

For Iowa, the game and road environment provides another opportunity to get a high-level road win, something that can elevate a program.

“We need to keep getting those signature wins,” said Disterhoft. “Last year getting the win at No. 9 Penn State was one of them. This would be similar; Louisville is ranked No. 7, and we’re playing on their home court and clearly the underdogs. It’s going into each game and proving yourself and you want to do that against some of the best competition. We have a chance to do that Thursday night.”