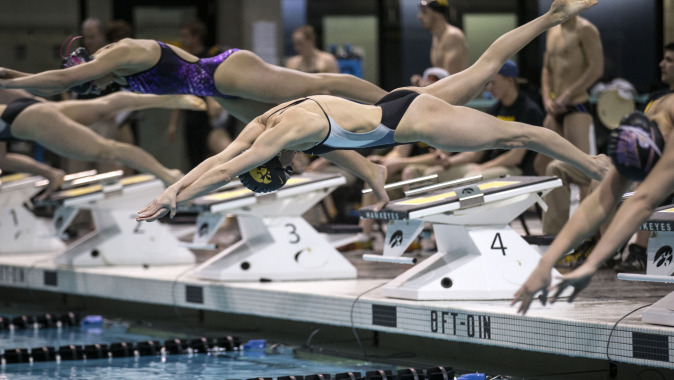 This Week
The University of Iowa women’s swimming and diving team hosts the Hawkeye Invitational from Dec. 5-7, at the Campus Recreation and Wellness Center Natatorium. Prelims for all three days will begin at 10 a.m. (CT), followed by a finals session at 6 p.m. Friday and Saturday, and 4 p.m. Sunday.

Promotions
Saturday’s competition will mark Senior Night where UI seniors will be recognized. The Hawkeyes are also welcoming all fans for “Pack the Pool” night where mini black and gold towels will be handed out to the first 50 fans in attendance. Fans can also register to win one of 10 Iowa prize packs. Free tropical smoothies will be given away to the first 50 fans in attendance Sunday.

Looking Ahead
The Hawkeyes return to action on Friday Dec. 12, hosting Iowa State at 6 p.m. in the CRWC Natatorium.

Scouting the Field
The Hawkeyes welcome three swimming and diving teams and five diving only teams to Iowa City for three days of competition. Denver, Washington State, and UW-Milwaukee will be competing, while Iowa State, Nebraska, Northern Iowa, Ohio State, and Michigan State will only compete in diving events.

Sougstad Named B1G Swimmer Of The Week
UI sophomore Emma Sougstad was been named the Big Ten Swimmer of the Week on Nov. 4. Sougstad earned the accolade after posting a pair of NCAA `B’ cut times in the dual against Minnesota on Oct. 31.

Diving to the Postseason
Redshirt seniors Lauren Kelba and Joelle Christy have posted NCAA Zone Diving standards on both the 1 and 3-meter this year. Christy leads the way on both the 1 (304.65) and 3-meter (306.38). Kelba posted a 281.10 on the 1-meter.

Off the High Dive
The Iowa diving team returns a veteran lineup, led by a trio of redshirt seniors — Abby Grilli, Joelle Christy, and Lauren Kelba. Grilli led the Hawkeyes in 3-meter diving last season with a score of 336.97. Christy led the team on 1-meter diving with a score of 319.45, and Calli Head led the Hawkeyes in platform diving. Grilli and Christy qualified for NCAA Zone Diving last season. Christy fell just short of making the finals placing 21st. Grilli earned an eighth-place finish in one-meter competition and an 11th-place finish in three-meter competition.

Championship Season
Six Hawkeyes competed in the Phillips 66 National Championships this past summer in Irvine, Calif. Senior Grant Betulius, juniors Mike Nelson, Brian Donatelli and Colleen Champa, and sophomores Kyle Patnode and Emma Sougstad each took part in competition. Sougstad earned a 16th-place finish in the 100 breaststroke in the final day of competition.