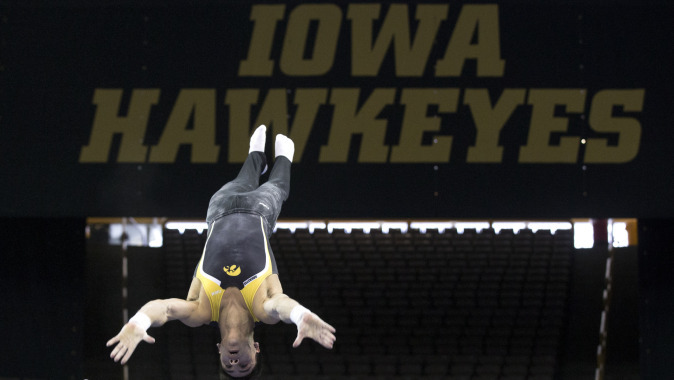 IOWA CITY, Iowa — The University of Iowa men gymnastics team debuted their 2015 squad this afternoon at the annual Black and Gold Intrasquad meet in the UI Field House.

“I am quite proud with how they performed today,” head coach JD Reive said. “This was a really good meet for December. They did what they I expected them to do and what practice looked like. It’s very important that how they train is how they perform. It’s as smooth a transition as I’ve had since I’ve been here.”

Sophomore Cory Paterson kicked off the event on floor for the Black team. Redshirt senior co-captain Lance Alberhasky followed with a 14.500. Redshirt junior co-captain answered with the highest score of the event tallying a 14.800, giving Gold the lead going into pommel horse.

Three freshmen participated on a revamped pommel horse lineup. Freshman Elijah Parsells grabbed the top score out of the freshman for the Gold team. However, junior Del Vecchio Orozco helped the Black team gain ground with a 14.650 and the Black team tied Gold 40.150 on the event.

“Pommel horse still choked on themselves and that’s just the nature of the event. They have to be mentally tougher,” Reive said. “At the same time. They fell and still scored the same as we did last year when we were hitting. The team is there. They have the talent. The repetitions have to go up and they have to put more pressure on themselves during practice because they can’t fall that much during the season and I will make sure of that.”

Alberhasky took the top score in rings with a 15.000 for the Black team and Loochtan grabbed the top score for the Gold team with a 14.600. Going into vault, both teams were neck and neck.

Gold team built on their lead on the parallel bars taking the event and widening their lead over Black team. Loochtan kept his hot streak going taking first in the event with a 14.800.

Entering the last event, Gold had a slim lead over Black. Underclassmen Hodges and Paterson led the Black team in the final event scoring 14.25 and 14.6, respectively. The Black team completed the comeback to defeat the Gold team 253.550 to 251.400.

“They underperformed,” Reive said. “High bar is usually a decent event for us. The sixth event and over two hours in, they started to lose their focus. That’s something we have to fix. These meets go for a while and they have to be mentally fresh on the last event as they were on the first event.”

In all, the Intrasquad was a success for the Hawkeyes. Next up is refining those skills and taking it to the next level.

“We need to keep the mental focus on during finals and during this down time between facilities,” Reive said. “We will keep our nose down and keep doing what we need to. We will be back here doing our two-a-days getting ready for the Windy City Invitational.”

Next up for the Hawkeyes is the Windy City Invitational on Jan. 17.