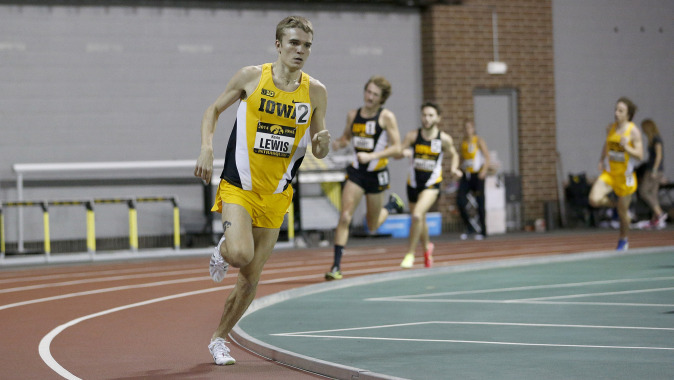 IOWA CITY, Iowa — The University of Iowa track and field team opened the 2014-15 indoor season Saturday with the annual Black and Gold Intrasquad at the UI Recreation Building. The Gold squad won with 80 points, while the Black squad tallied 73 points for second place.

Kevin Lewis brought the crowd to their feet in the men’s mile. The senior ran a career-best performance of 4:07.19 to win the event. His time would have ranked seventh on Iowa’s all-time list. Sophomore Alana Jones captured the women’s mile title when she crossed the line in 5:16.18.

“It’s a really good starting spot,” Lewis said. “I know I’m going to be faster for our next home meet in January. It’s really good to know that I can run 4:07 right now, so in five weeks from now when we have our meet I can set my sights on something like a 4:05. I’m really happy with that race.”

Will Teubel started his indoor season on a high note, taking the men’s 600-meters title. The junior crossed the line in 1:18.39. His collegiate-best time 1:17.84 ranks second on Iowa’s all-time list.

“Will Teubel was really impressive in the 600 meters,” Director of Track and Field Joey Woody said. To see a guy go out there and put together a 1:18 this early in the season is really good.”

“One the women’s side I thought the 300 and 600 were really good and competitive races. It’s good to see them get out there and compete at a really high level,” Woody said.

Junior James Harrington raced to a first-place finish (6.84) in the 60-meter dash, while freshman Jahisha Thomas took the women’s title with a time of 7:93. Sophomore Aaron Mallett won the 60-meter hurdle race in 7.99.

The Hawkeyes officially kick off the indoor season Jan. 10 hosting the Border Battle, which features Illinois and Missouri. The event begins at noon (CT) at the UI Recreation Building.