It's a Wonderful Life for Scherff 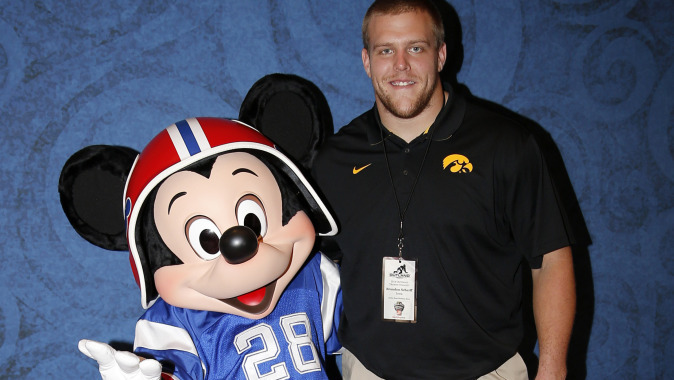 ORLANDO — Brandon Scherff has lived a simple, wonderful life, but becoming the most famous person from Denison, Iowa, will take some doing, especially this time of year.

Scherff, a 6-foot-5, 320-pound offensive left tackle for the University of Iowa, is one of three finalists for the Outland Trophy (Malcom Brown of Texas and Reese Dismukes of Auburn are the others). The winner will be announced tonight during The Home Depot College Football Awards show from 6-8 p.m. (CT) on ESPN.

Still, Scherff concedes that he isn’t the most famous native of Denison, a city of 8,000 people located in west central Iowa. Who is most famous? All you have to do is read the water tower in town. Under the word DENISON it says, “It’s a Wonderful Life.”

“Donna Reed is from Denison,” Scherff told a room of reporters Wednesday at the Disney Boardwalk Hotel. “There is a movie theater named after her in town: The Donna Reed Theatre.”

Reed, who passed away in 1986, starred in Frank Capra’s 1946 Christmastime film favorite, “It’s a Wonderful Life.”

While Reed is more prominent than Scherff on the silver screen, the latter has made a name for himself on college gridirons across the country. As of Thursday, Scherff has been named first-team All-America by three different teams: Walter Camp, USA Today, and CBS Sports.

If it wasn’t for the way Iowa high schools conduct their spring sports seasons, people might be talking about Scherff in the same breathe as Roger Federer instead of Marcus Mariota. As a freshman in high school, Scherff bounced from tennis practice to track practice to baseball practice after school in the spring. He played No. 4 singles as a freshman, but the demands of three practices a day took its toll.

“If he would have stayed with tennis, his sophomore year he would have been our No. 1 player,” said Dave Wiebers, who coached Scherff in football at Denison.

Through flag football and middle school, and until midway through his junior season of high school, Scherff was the Monarchs’ starting quarterback. He went through a growth spurt between his sophomore and junior years of high school and University of Iowa coaches noticed. But Scherff certainly was not quarterback material at the next level.

Wiebers knew Scherff was going to be big, but Denison had no one else on the roster who could throw, run, or exhibit Scherff’s athleticism.

“He gave us the best chance to win,” Wiebers said.

Once a younger player emerged behind center, Scherff moved to tight end.

“The first time I put my hand in the dirt and hit somebody, I came back to the huddle and said, `Oh, this is fun,'” Scherff said.

From 2007-09, Denison ran the veer offense and it was easy for Scherff to fire off the ball and go after a defender. That contrasts to the zone blocking scheme the Hawkeyes use.

“It is simply amazing what Iowa has done with him,” Wiebers said. “To take a kid that had one year of high school football with his hand on the ground and make him an Outland finalist is amazing.”

At the request of his parents Bob and Cindy, Scherff returned to the UI to finish his bachelor’s degree in sports studies, even though he was a shoo-in to be a high selection in the 2014 NFL Draft after his junior season. He will graduate in two weeks.

You would be wrong if you believe Scherff thinks more about becoming a professional than he does about winning the TaxSlayer Bowl with his teammates Jan. 2. A reporter from Tampa grilled Scherff on Wednesday about the NFL, reminding him that the Buccaneers have the No. 1 selection in the draft in April.

Reporter: “I’m not here to stir up the Marcus Mariota-Brandon Scherff thing for the Tampa Bay Buccaneers, but certainly your name has been all over lately with that. You block all that out?”

“Where are they projecting you?” another reporter asks.

“I have no idea. I haven’t seen anything,” Scherff said.

As uncomfortable as he is about talking NFL, Scherff is at ease discussing his time as a Hawkeye. His favorite play is when he used his explosive power to pancake a cornerback from Pittsburgh who came on a delayed blitz during Iowa’s 24-20 win Sept. 20.

“I got him and it felt good,” Scherff said. “He went right to the ground. I didn’t say anything.”

Scherff said the toughest matchups he had in college were against Shilique Calhoun of Michigan State and Joey Bosa of Ohio State. Even Calhoun and Bosa are somewhat of a break for Scherff, who as a freshman, battled daily against Hawkeye teammates Adrian Clayborn, Karl Klug, Mike Daniels, Christian Ballard, and Broderick Binns.

While Scherff was taking his lumps as a youngster in practice, he began to out-study his opposition in the film room. He worked hard for strength and conditioning coach Chris Doyle. He gradually developed into one of the top linemen in college football.

“You have to be two different guys: on the field you have to be nasty and physical, and off the field you can be the nicest guy you want to be,” Scherff said. “I fit the mold of both. I want to be known as a physical player and I want people to be afraid of me (on the field). When they put on film of me, hopefully they don’t want to play.”

Nothing will change for Scherff if he wins the Outland Trophy tonight. Success hasn’t spoiled this small-town Iowan, whose Christmas wish list includes ice fishing gear and a warmer set of camouflage hunting clothes.

“He hasn’t changed who he is as a person off the football field,” Wiebers said. “You take a small kid from Denison, Iowa, that has lived a fairly simple life where it’s family, friends, and community. He is not a world traveler and all the sudden he’s in the national spotlight of being an Outland Trophy candidate. That is more than I ever dreamed. I don’t know if he ever thought he would be sitting here, but he has done a great job handling all that.”

Win or lose, Scherff will still play second fiddle in his hometown behind an actress in a holiday film classic. That’s fine with him. Brandon Scherff is living a wonderful life.