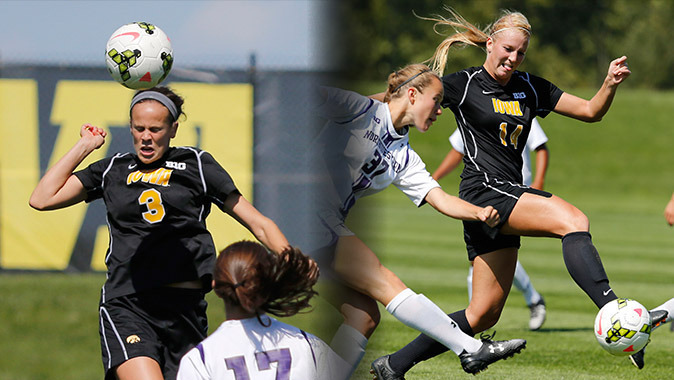 IOWA CITY, Iowa — University of Iowa soccer seniors Caitlin Brown and Emily Scott were honored as NSCAA Scholar All-North/Central Region selections, it was announced Wednesday by the NSCAA. Brown was named to the second team, Scott to the third team.

Brown has a 3.55 grade point average, majoring in health and human physiology and Spanish. It is the second-straight season the Ann Arbor, Michigan, native has earned Scholar All-Region honors.

On the playing field, Brown started all 22 games in 2014, where she was a key member of a Hawkeye defense that tied a school record with 12 shutouts. Brown started 85-of-86 games of her UI career.

Scott, a third-team Scholar All-Region honoree, has a 3.68 grade point average, majoring in journalism and mass communications. The Tinley Park, Illinois, native started 21 games as a senior, where she scored one goal — a game-winner in Iowa’s 3-1 triumph over Purdue. Scott played 44 games in two seasons as a Hawkeye.

Iowa finished with a 14-7-1 overall record under first-year head coach Dave DiIanni with the 14 victories being the second-most in a single season in program history. The Hawkeyes tied a school record with seven Big Ten wins and tallied their third top-five league finish since 2011.