Back in Black to the Future 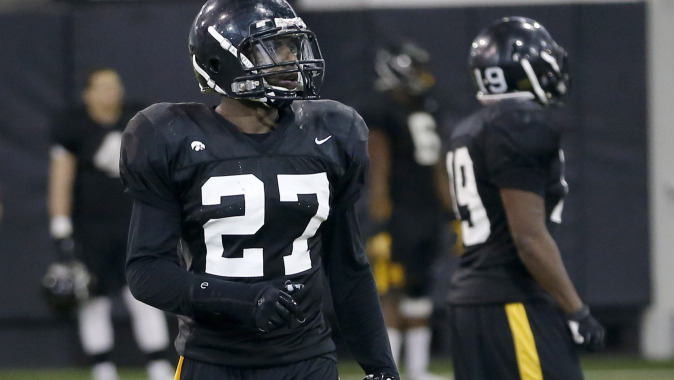 It was a step into 2015 for the University of Iowa football team during its eighth postseason practice Dec. 20 in preparation for the TaxSlayer Bowl against Tennessee on Jan. 2.

Outland Trophy winner Brandon Scherff wasn’t there. Either was leading tackler Johnny Lowdermilk, leading rusher Mark Weisman, or leading receiver Kevonte Martin-Manley. Saturday was the one time during bowl season when seniors are excused from drills because of graduation.

“It is a great challenge and a great experience,” said junior free safety Jordan Lomax. “We get a preview of what next year is going to be like. It is a good opportunity for us to come out here and play together because this is who we are and who we are going to have next year.”

Lomax, who finished the regular season with 84 tackles, six pass breakups, and an interception, is one of the players who will be counted on as a leader next season. That exercise was on display in the Indoor Football Practice Facility on Saturday when Lomax and others made certain the practice was intense with a quick tempo. It wasn’t unlike the previous seven practices the Hawkeyes have had leading up to the TaxSlayer Bowl.

“We know how good of a team we can be when we execute and we don’t have missed assignments or errors,” Lomax said. “It is getting back to our fundamental; that is what we’re harping on during this bowl prep.”

The Hawkeyes (7-5) and Tennessee (6-6) meet in the TaxSlayer Bowl on EverBank Field in Jacksonville, Florida. Iowa has posted a 6-5 bowl record under head coach Kirk Ferentz. Since the 2001 season, no Big Ten Conference team has won more bowl games or has a higher winning percentage in bowl games than Iowa.

Now that the fall semester has ended, Lomax and the rest of the student-athletes can concentrate solely on football and the Volunteers.

“It’s a good relief, you don’t have to worry about classes or finals,” Lomax said. “You only have one place to be and that’s at football. Outside of football you can relax and put on game film of Tennessee.”

The Hawkeye return to practice Sunday…with the seniors in pads and back on the field.

To order tickets to the TaxSlayer Bowl, click HERE.