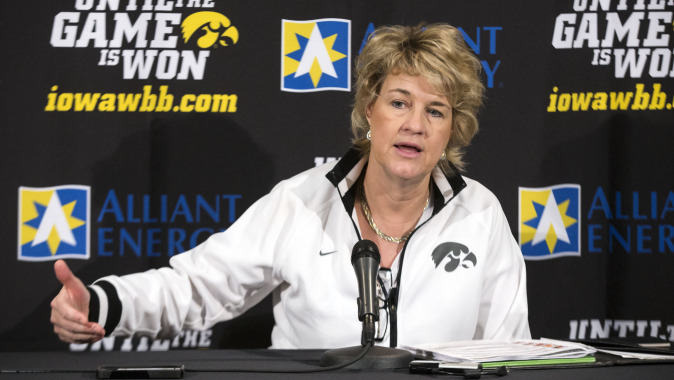 COACH BLUDER: I thought it was a good way to start the Big Ten. It’s just one game and it’s going to be a grueling schedule, we have 17 more of these. I thought we played very well today in a lot of different areas. But that 21 assists was excellent. Ally has a career high in eight assists. Bethany scores her 1,000th point and becomes the 33rd woman in our history to score 1,000 points. I thought we rebounded better. I love the double figures. Again, five players in double figures; one of them off the bench in Christina Buttenham; I thought she gave us a real nice start. We had to battle through some adversity. This week, we never had anybody everybody at a full practice this week because of the flu, and so it was really nice to battle through that adversity and still get the victory today.

Q. Who was affected by the flu?
COACH BLUDER: Melissa, Kali, Ally, Lex and a couple managers, too.

Q. You held them to 31 percent shooting. Were you happy with the defense today?
COACH BLUDER: I was. I thought the thing I was most happy with was forcing 24 turnovers. Sometimes those deflections in our zone lead to quick scores for us, and we can get a lot of momentum going on our side with those. So, I was happy with the amount of turnovers that we forced and the field goal percentage, too, that we held them too.

Q. You mentioned Christina Buckingham. She got some significant minutes and played really well. Are you starting to see her grow into a legit supporting role?
COACH BLUDER: I think she’s played and practiced very well. Even into the Drake game, I thought she practiced well. Lex and really this is the first time I saw Lex was in today’s shootaround, and she never was able to go through the scout or anything, and that’s why Lex didn’t play (much) today. But I thought Christina did a great job of: Here is an opportunity, I’m taking full advantage of this opportunity, and I thought she did a great job preparing in practice the last two days for that.

Q. How important was it to jump out to that 16 1 start after not playing for a week and holiday in there; how important was that to just role out of the game, jump up 15 a few minutes in.
COACH BLUDER: It was nice to see, especially Penn State being a little bit of a younger team and they don’t have a lot of experience. So that can really mess with you mentally when you get down on the road that quickly. I thought that was a great way to start this game.

Q. Rutgers coming up, and you have a full week to prepare for a big Big Ten game against a ranked team.
COACH BLUDER: It is. They are ranked ahead of us. It’s at their place. It’s our only meeting all year. We have the Vivian Stringer angle, as well. So a lot of different emotional things go into that. But it’s ideally not the perfect time for a bye. You get one bye a year, and we have it the second game and have to play 17 straight games. That’s not an ideal situation but we can’t control that. So what we have to do is just focus on: Okay, let’s spend all week getting ready for Rutgers and give it our best shot. I think you need a week to get ready for somebody like Rutgers who plays differently as far as full court press, heavy denial, great ball pressure, but also, you know, it’s a new opponent in our Big Ten. So we are not familiar with that style. So it gives us more time to get ready for them. Great crowd today, too.