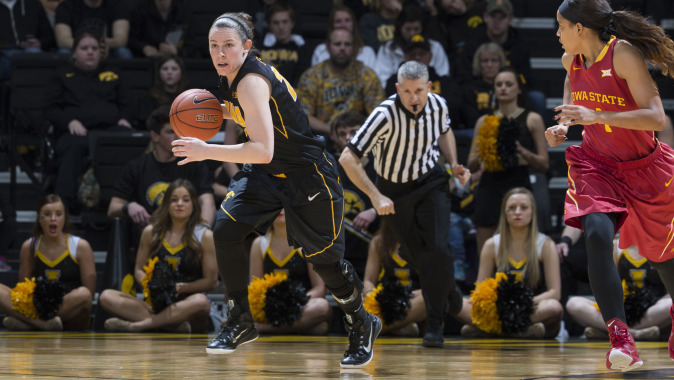 IOWA CITY, Iowa — University of Iowa senior Samantha Logic has been named to the John R. Wooden Award Women’s Midseason Top 20 list, comprised of the front-runners for college basketball’s most prestigious individual honor. The list is chosen by a poll of national women’s college basketball media members. Logic is the only player from the Big Ten on the midseason list.

The Wooden Award All-America Team, consisting of the nation’s top five players, will be announced the week of the Final Four.

Logic, the NCAA’s active career assists leader (737), ranks sixth in assists in Big Ten history. She leads the Big Ten and ranks 10th in the NCAA in the category this season (6.8), while also averaging 10.8 points and 6.8 rebounds per game.

The 39th annual Wooden Award ceremony will honor the men’s and women’s Wooden Award winners, and will include the presentation of the Wooden Award All-American Teams and the Legends of Coaching Award, which in 2015 will go to San Diego State head men’s basketball coach Steve Fisher. The event will take place the weekend of April 10-12, 2015.