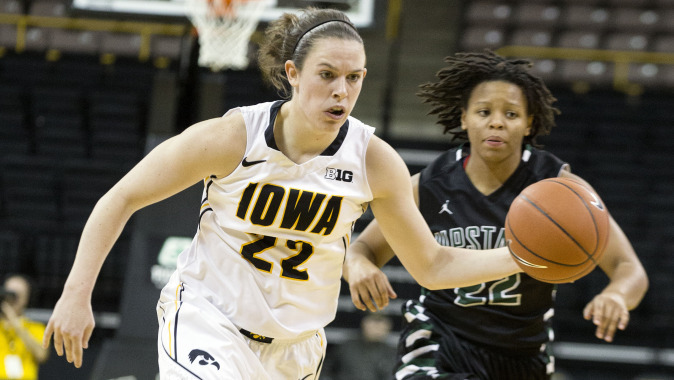 IOWA CITY, Iowa — University of Iowa senior point guard Samantha Logic is one of 30 NCAA Division I women’s basketball players to be named a candidate for the 2015 Senior CLASS Award®.

To be eligible for the award, a student-athlete must be classified as an NCAA Division I senior and have notable achievements in four areas of excellence: community, classroom, character and competition. Logic is one of two candidates from the Big Ten, joining Nicole Elmblad of Michigan.

An acronym for Celebrating Loyalty and Achievement for Staying in School ®, the Senior CLASS Award focuses on the total student-athlete and encourages students to use their platform in athletics to make a positive impact as leaders in their communities.

Each of the 30 candidate classes will be narrowed to 10 finalists later in the regular season, and those 10 names will be placed on the official ballot. Ballots will be distributed through a nationwide voting system to media, coaches and fans, who will select one male candidate and one female candidate who best exemplify excellence in the four categories of community, classroom, character and competition.

Logic, the NCAA’s active career assists leader (748), ranks sixth in assists in Big Ten history. She leads the Big Ten and ranks fifth in the NCAA in the category this season (7.0), while also averaging 10.9 points and 6.8 rebounds per game.