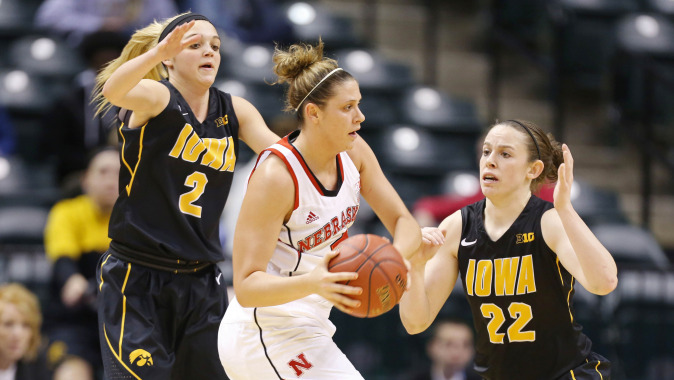 The Hawkeyes, winners of nine-of-10 overall, have won four-straight games, while the Huskers, winners of eight-of-10, have won their last five contests.

The streaky teams and conference rivals will be jockeying for position in the Big Ten Conference standings. Iowa enters Monday’s game in second place at 6-1, one game ahead of Nebraska (5-2). Maryland is in first place at 8-0.

“It feels good to be in second place, but it is early,” said UI head coach Lisa Bluder. “There are a lot of games left. We know that. We are going to enjoy this, but at the same time Nebraska comes to town on Monday. They have been our nemesis and have been a team that has given us fits.”

The Huskers have won the last eight meetings against the Hawkeyes, including last year’s Big Ten Tournament title game.

“We are looking forward to having Nebraska at home in front of our awesome fans, and view this game as an incredible opportunity,” said sophomore Ally Disterhoft. “Nebraska is ranked ahead of us in the polls, and has proven to be a thorn in our side for some time now, so getting a win Monday night would be huge.”

Iowa is excited to host Nebraska on Mediacom Court, a place where it is 11-0 this season, and 25-4 since the start of last year.

“We have them in Carver-Hawkeye Arena,” said Bluder. “We have a lot of great promotions: Sam Logic Bobblehead night, buck night, kids are free. We are doing everything we can to try to get an 8 p.m. Monday night crowd here, because again, I thought against Michigan, for an 8 p.m. tip, our crowd was great. We feed off of that, our players love it… so if we can get them here again at 8 p.m. Monday night it would be huge.”

A challenging week awaits as Iowa plays three games in seven days. Following Monday’s tilt against Nebraska, Iowa travels to Northwestern on Thursday night and No. 6 Maryland on Sunday.

Through all the buildup, the Hawkeyes are focused on playing Iowa basketball.

“Our team has been focused this week in preparing to face Nebraska on Monday night,” said junior Claire Till. “We know what we are capable of and we have executed how we need to in practice. On Monday, we need to come out, perform, stay focused, and play Iowa basketball. We are confident, excited, and ready to get another Hawkeye victory.”

“We are heading into this game expecting a battle, but are confident that we will find success through execution, and simply playing Iowa women’s basketball,” said Disterhoft. “We are ready to get back out on the court and execute.”

Monday’s game can be seen live on BTN. Kids, UI students, and UI faculty and staff are admitted free while all other tickets are $1.

“There is nothing better than playing at home in front of our amazing fans,” said senior Melissa Dixon, the nation’s leading three-point shooter. “We are excited to get back on our home floor Monday night.”