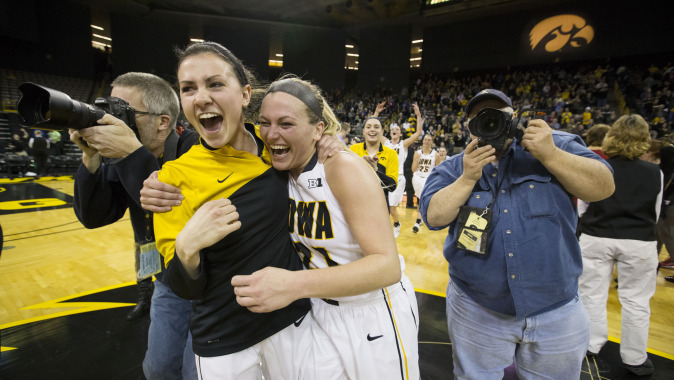 Lisa Bluder: First of all, we beat a really good team tonight. Nebraska is a great team. They’re well coached. They have great balance, they’ve got speed. That’s what makes this win feel so good… because we beat a very, very good basketball team, and one we haven’t beaten for a while. That makes it pretty special, and especially for our seniors that haven’t had this opportunity so far.

Our crowd was great today. Great energy. 4500 people showing up at 8 o’clock tip Monday night, we need their energy, we’re down 7 points at half, and we used it. Thank for everybody who showed up tonight.

Totally different game in the second half. The first half we couldn’t get anything going, Beth was in foul trouble. But I thought our bench came in, everybody from Claire to Chase to Christina, to Kali, I thought they all contributed, but of course Ally’s 20 points in the second half, double-double, with 13 rebounds, Sam has 22 and 8 assists. Great job by these young ladies.

Q. Just the significance of beating these guys for the first time?
Samantha Logic: It feels good, right now in Big Ten it’s try to keep it in perspective, keeping possession of the second place to ourselves. But obviously as a competitor, you don’t want to keep losing to a team. So for us seniors it was pretty big and pretty is special. And huge to have the crowd, a lot of energy, even any little run that we had they were behind us. So we appreciated that and hope that can keep coming.

Q. Can you walk us through that play of regulation, it seemed like it went exactly the way you wanted it to?
Lisa Bluder: It did. It was really nice. We practice last second situations and they know what to do. We didn’t even drive to the board, I don’t think, maybe very little, but we just called the name of the play and they ran it to a tee. I mean, Sam’s pass was on the money. Beth’s pass was on the money. And our option there is to call timeout if nothing is there. I saw she had a free rein so we let it go.

Q. Ally, can you talk about your second half. Can you take it upon yourself to make sure you didn’t lose again to these guys?
Ally Disterhoft: I don’t think it was as much taking it on myself, but we came in at half, and everybody just came together and said, look, our shots haven’t been falling, we can’t control that, but we can control our rebounding in the second half. At no point in time did my teammates or coaches think my next shots weren’t going to go in. When you have girls like that who believe in you so much, it’s easy to play great and find success, because we are an unselfish team.

Q. With the recent history against Nebraska and the fact that your shots weren’t falling early, what was your key in keeping it within your reach to keep it in the second half?
Lisa Bluder: When you’re not scoring, you’ve got to really focus on defense. We tied them on the boards. For us that’s a win. But really it was just focusing on the defense, because we couldn’t let them score, if we weren’t scoring, obviously. It sounds elementary, but it really is. Work hard on the defensive end. And obviously the second half the shots started going in. We have almost as many field goals in overtime as we do in the first half. Got a lot better.

Q. What changed in that second half and allowed you to chip away?
Samantha Logic: I think it was our defense. Not in the first eight minutes, even, but to have that mental capacity after tying the next four minutes, two times, still being down seven with 12 minutes to go. We got stops and rebounds, and then we have to push. We got out in transition, and I think that’s why shots were falling a little better. When we push in transition, we get better shots. There’s a lot of driving lanes open, it’s just such a team effort. We’re happy with the win, and looking to keep it rolling.

Q. You talked about what it said about your team to win a game the way you did at Michigan State. What does a win like this say coming from ten points down in the second half to beat a team that good?
Lisa Bluder: It means a lot. They play similar to Michigan State on the defensive end. It was nice to overcome that, and be able to understand that we can run our offense effectively, against that type of defense. And so when we went into overtime, there was no doubt in our players’ minds we were going to win. There was absolutely no doubt, everybody was super excited and going into that overtime, which was kind of fun.

Q. We saw more of Claire than we’ve seen previously. What you thought she brought to the game?
Lisa Bluder: Well, we had to have Claire and Chase step up, because of Bethany’s foul trouble. I thought Claire, defensively, did a nice job for us. Chase is two for two. Claire, I wish she had that back door, had that beautiful back door, missed that shot. Those were important minutes for us, and they came through for us.

Q. Ally, what’s these moments like as a player, just celebrate in front of the crowd like it was tonight? And to come back with your team like that?
Ally Disterhoft: They’re awesome, and they’re kind of hard to describe. Before coming out to the game Coach Bluder was talking about it’s going to be so fun when we win, to come back in the locker room and celebrate together. And to be able to do that after that big of a win in overtime was really special for everyone. And I think we really wanted to get this win for the seniors and for Lex, being from Nebraska.

Q. Ally, when you’re in the zone in the second half is it unconscious, where you think everything is going in, and your confident in everything you do?
Ally Disterhoft: I think you have to think that everything is going in all the time, even if you’ve had a lot of misses in the past. But like we’ve all talked about, it’s really about the team. Everybody else started setting up, Sam, Melissa, Bethany, Whit, when everybody is focusing, that opens up a lot of driving lanes, a lot of threes from pitches, that happens when you have a team that plays unselfishly.

Q. You’ve got Northwestern later on in the week. Does your preparation change, and if it does, how does it, when you’re preparing for a team the second time around?
Lisa Bluder: It makes it a little bit easier, the team understands them, they know what their capable of, and strengths and weaknesses, and understands their offense and what they’re good at. It does make it a little easier.

This is an unusual week for us. We have three games within the span of a week, that’s the NCAA rules, we have to take a day off. Tomorrow has to be a day off. We’ll have one day of preparation for Northwestern, and we usually have two days of prep. That’s a little bit difficult, but we thought we could have chosen to take it Friday but we thought one day for Northwestern, they’ll kick it up in a day.