No. 19 Hawkeyes in Front After Day 1 at Shamrock Invite 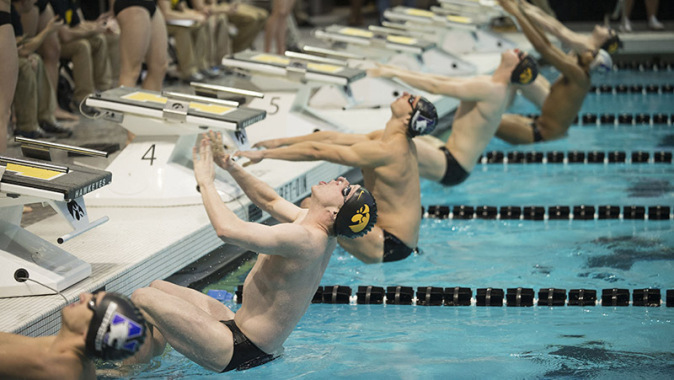 IOWA CITY, Iowa — The 19th-ranked University of Iowa men’s swimming and diving team leads all three opponents after day one at the Shamrock Invitational on Friday in South Bend, Indiana. Through 12 events in a head-to-head scoring format, the Hawkeyes currently lead Incarnate Word (74-17), Notre Dame (53-38), and Missouri State (66-25).

“It was a good start to a competitive meet,” said UI head coach Marc Long. “We’re here to race and get sharper. This meet is about us and taking care of what we can do and making positive adjustments as we work towards the Big Tens and postseason.”

The quartet of Joseph Halsmer, Brian Donatelli, Charles Holliday, and Grant Betulius set the tone in the opening race — the 200 medley relay. The foursome paced the field touching out with a first-place time of 1:21.87. Brandon Farnum, Roman Trussov, David Ernstsson, and R.J. Hemmingson took third (1:22.87).

The Hawkeyes finished on a high note with a first-place finish in the 400 medley relay. The Foursome of Betulius, Trussov, Twarowski, and Halsmer touched in with a pool record-setting time of 3:14.92.

“Setting the pool record in the 400 medley was outstanding,” said Long. “It’s always nice to get the win and we’ve been working hard on our relays. Tonight we were able to get our hands on the wall first. We’re racing well and we’ve got a big day tomorrow.”

In the diving well, Addison Boschult led the Black and Gold on the 1-meter posting a fifth-place score of 320.35.

“Addison performed well nearly matching a career best on the 1-meter,” said UI diving coach Todd Waikel. “Unfortunately, we were up against a really competitive Notre Dame group that outdove us tonight. We always compete to win but we’re going to keep moving in the right direction. Tomorrow is a new day and we’re going to get back at it and battle.”

The Hawkeyes return to action Saturday at 9 a.m. (CT) for day-two action at the Shamrock Invitational in South Bend, Indiana.