IOWA CITY, Iowa — The Hawkeyes relied on the Hawkeye State for the bulk of 21 student-athletes that comprise their 2015 football signing class.

Nine players from high schools across the state of Iowa penned National Letters of Intent on Wednesday to play football for the University of Iowa. Four are part of a five-member unit of offensive linemen, the largest position group in the class. 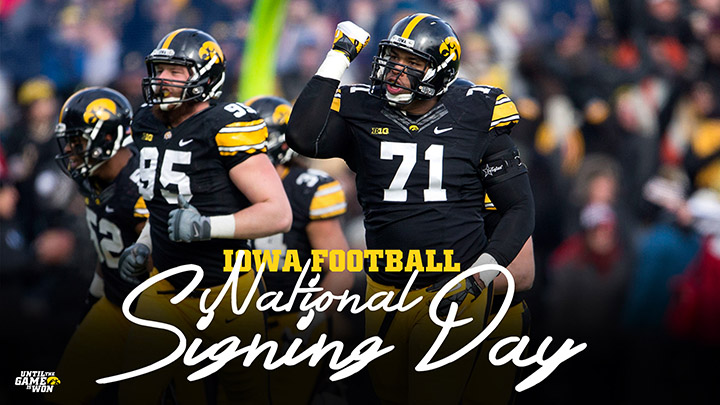 “This is a very healthy number,” UI head caoch Kirk Ferentz said Wednesday in the Feller Club Room inside Carver-Hawkeye Arena. “You’ve got different positions, sizes, and weights, but the common denominator is that we feel good about the attributes we identified in the players. We look at the attributes and characteristics of the guys that have had success here, whether they came from Iowa or other places, and then try to identify those in the prospects that we’re evaluating. Certainly with the guys we have coming from Iowa, we feel good about them.”

One of the offensive linemen in Iowa’s signing day class of 2015 is James Daniels of Warren, Ohio — brother of current Hawkeye LeShun Daniels, Jr. Daniels, Brady Reiff, and Waechter are already on campus and enrolled in classes.

At least four of the newest Hawkeyes (including Daniels) have connections to the program. Cook’s father, Marv, was a consensus All-American for Iowa as a tight end in 1988; Reiff’s brother, Riley, was a second-team All-Big Ten offensive lineman in 2010; Nelson’s father, Jeff, lettered as a defensive lineman for the Hawkeyes from 1990-92.

“When you get that perspective of a player, you like to think that some of that is going to get shared with a relative,” Ferentz said.

“Probably like every coach in America, I’m enthused about the group we were able to sign,” Ferentz said. “I’m enthused about the 21 guys that decided to join our program, and seven other walk ons, as well, which I think is significant. The whole group is a quality group. We’re impressed with each one of the players who has chosen to join us.”

With the addition of Boyle and Cook, it is the first time two native Iowa quarterbacks signed with the Hawkeyes in the same class since 1974 (Tom McLaughlin and Phil Hegg). Ferentz says both will start out playing quarterback.

“They’re different yet they’re the same in a lot of ways,” Ferentz said. “One is certainly taller than the other, but the bottom line is they’re great players with great intangibles and leadership skills, and we’re excited about the upside of both guys.

“We feel good about both of them. In a perfect world you don’t want two in the same class, but they’re both players that we felt so highly of that we were determined to get both of them in this class if we could.”

The Hawkeyes begin spring practices the last week of March.

To be directed to Signing Day Central, click HERE.