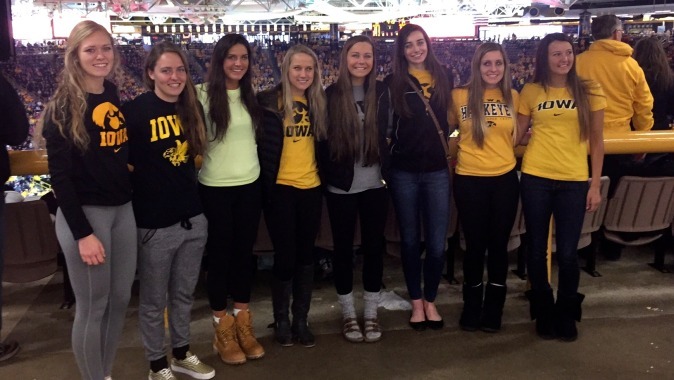 The class includes players from six states, including three from Illinois and one from Missouri, Iowa, Minnesota, Oklahoma, and Indiana. The class consists of three forwards, two midfielders, two defenders, and one goalkeeper.

“Today is an exciting day for these eight student-athletes,” said DiIanni, who led Iowa to 14-7-1 record and a Big Ten Tournament championship game berth in his first season. “The process many of them have gone through has been a long time coming. Committing to the program nearly two years ago and watching as a coaching change occurs and recommitting to the school and program speaks volumes about their character.

“We look to this class to help fill needs in our program with the graduation of nine seniors. We have addressed every position on the field, and we look forward to watching this group develop and contribute next fall. We are excited to welcome them into our program and for them to begin their Iowa student-athlete experience.”

High School — Two-time all-state selection, earning honorable mention honors as a freshman and second-team honors as a sophomore… team captain as a senior… finished with 54 career points on 20 goals and 14 assists… helped team to three-straight MWAA titles (2012-14) and a Class 2 state championship in 2014, finishing with a 22-3-1 record… played club soccer for St. Louis Scott Gallagher Elite (ECNL) from 2010-15… participated in the 2012 ENCL Player Development Program in Madison, Wisconsin… placed second at the 2012 ECNL Championship in the North American Conference… also was a second-team all-state guard on the basketball team, leading team to a MWAA Blue title… high school coach was Dick Westbrook… club coaches were Steve Pecher and Ralph Richards.

Why Iowa? — “I chose to attend the University of Iowa because the school can help me succeed academically and athletically. The reason that stands out the most is Iowa has always been a part of my family. Iowa is home to my family and soon will be home for me as well.”

High School — Played club soccer for Altoona Capricha (2009-10) and Iowa Rush (2011-15)… won the Iowa State Cup Championship in 2013, 2014, and 2015… was the top scorer in the Region II Tournament in 2013 and 2014… led team to a Midwest Regional League Championship in 2014 and a third-place Region II finish… also lettered in basketball, track, and cross country… earned all-district and all-conference honors in basketball in 2014 and was a IGCA Senior All-Star in 2015… led team to a 2014 conference title and a state quarterfinal appearance… holds school records in 400-meters, 400-hurdles, 800-meter relay, and spring medley relay… finished second in state in 400-meter hurdles in 2012 and 2013… finished sixth in 400-meters in 2012 and fifth in 2013… three-time Drake Relays qualifier… club coaches were Paul Fabry and Daryl Brazeau.

Why Iowa? — “The Hawkeyes have always been my favorite team since I was a child. I wouldn’t want to play for any other team. The University of Iowa is also a great school for me as a student with the classes that are offered as a pre-med student.”

High School — Finalist for Ms. Soccer as a senior… Pioneer Press Player of the Year as a senior… two-time all-state and first-team selection by the Star Tribune and Pioneer Press… three-time all-conference selection… Most Valuable Player of the all-state game as a senior… named to the state all-tournament team as a junior… team captain as a senior… scored 79 career goals and had 33 career assists… scored 28 goals and had 15 assists as a junior and 22 goals and 11 assists as a senior… netted 11 goals and three assists as a freshman and 18 goals and four assists as a sophomore… helped team to four Classic Suburban Conference titles and one Metro East title… team was Class A runner-up in 2010… played club soccer for the Midwest Thunder Academy (2011-12), winning a Midwest League title and NSSA Blast (2013-14), winning a State Cup title… also lettered in basketball and track and field… high school coach was Dave Wald… club coach was John Michaelson.

Why Iowa? — “My first time on campus I knew the University of Iowa was a good fit for me. I was impressed with the team and the players. I’m looking forward to beginning my Hawkeye soccer journey.”

High School — Three-time all-conference selection… led team to a 58-11-7 record in first three seasons at Waubonsie Valley High School… team was a regional finalist in 2012, a sectional finalist in 2013, and finished third in the state in 2014… played club soccer for the NSA Jaguars for nine years, serving as team captain for six years… State Cup champions in 2010, 2012, 2013, and fall 2013… State Cup finalist in 2011 and 2014… regional champions in 2013… advanced to nationals in 2013 and 2014… finished second in the National League in 2014… high school coach was Julie Bergstrom… club coach was Kieren Keane.

Why Iowa? — “I chose to attend the University of Iowa as a student-athlete because of the excellent medical program, the growing soccer program in the Big Ten, and the overall atmosphere of the campus.”

Why Iowa? — “I chose the University of Iowa because of the rising soccer program — it’s getting stronger every year. I also have family in Iowa so it is like my second home. I have always wanted to have a career in the medical field, and Iowa has a great medical program.”

Why Iowa? — “There are three main reasons why I chose the University of Iowa. The first is the academic programs and how amazing they are. The dentistry program is top in the country and since I want to pursue that field, it seemed a perfect fit. The second was the soccer program. They have had an amazing past few years. I love the way they play and that they compete at a high level in the Big Ten. The final reason is because of the people. Every time I visited, there hasn’t been a second where I haven’t felt like I fit in. Everyone is so nice and welcoming. Once I was at the school, I just knew.”

High School — All-Midwest and Daily Herald All-Area team honoree as a junior… all-sectional as a sophomore… honorable mention all-conference as a freshman… has 37 shutouts in 76 career games in her first three prep seasons — the second-most in school history… went 16-5-3 with 11 shutouts and a .541 goals against average as a freshman, 19-4-1 with 13 shutouts and a .583 goals against average as a sophomore, and 23-2-3 with 13 shutouts and a .357 goals against average as a junior… helped team to a third-place state finish in 2014, a sectional finalist in 2013, and a regional finalist in 2012… two-time Upstate 8 conference champions… played club soccer for the Galaxy Soccer Club, serving as team captain since 2006… won the U.S. Club Soccer National Championship, playing for FCX North Black, and the ECNL National Championship, playing for Colorado Rush… was a ODP Region 2 team member in 2011-12, the ODP Regional Camp Golden Glove recipient (2012), and on the ODP National Camp roster in 2012… also lettered in basketball, earning True Warrior Award as a sophomore and being named team MVP as a junior… high school coach was Julie Bergstrom… club coach was Brett Strang.

Personal — Born June 28, 1997… daughter of Ryan and Lori Rigby… has one younger brother, Brendan… prep teammate of fellow signee, Morgan Kemerling… High Honor Roll recipient from 2011-15… named an Illinois State Scholar in 2015 and earned the Prairie State Achievement Award in 2014… Special Olympics volunteer in soccer and a member of the LINK Crew… majoring in biomedical engineering.

Why Iowa? — “I chose the University of Iowa because of the environment. Coming from a high school with a lot of school spirit, I loved the atmosphere of Iowa. Students are proud to be Hawkeyes and show black and gold all around campus. I also liked Iowa’s science program. Going to school as a biomedical engineer major, it meant a lot to me to choose a school with strong medical and engineering programs with a commitment to bettering its students. Finally, I chose to Iowa soccer because I knew I’d be surrounded by girls who love the game as much as I do and who will push me to succeed. I’m so grateful to be given the opportunity to be a part of the Iowa family.”

Why Iowa? — “When I stepped on campus, I knew right away Iowa was the school I wanted to be a part of. The combination of academics and athletics that Iowa offers is a perfect fit for me. The traditions at the school and expectations of excellence solidified the choice for me. I couldn’t be more excited to continue playing soccer at the University of Iowa and becoming a Hawkeye.”