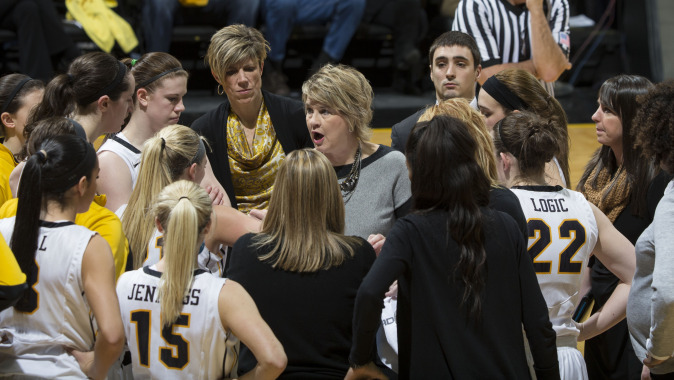 Lisa Bluder: We took care of business on our home court tonight. A very important game because they’re breathing on the back door there for second place. I thought our defensive effort was outstanding tonight. We just kept track — Mitchell has half of her points she’s been averaging. Ameryst has half of the points she’s been averaging, and that is obviously the key to our winning tonight.

Q. Talk about the quick start?
Lisa Bluder: It was big. We got our transition going. We forced some turnovers and got it going. Those are high-percentage shots for us, so that was good. They took that away from us in the second half, but I thought that an early start was good.

Q. Was it defensive intensity on your part?
Lisa Bluder: I think they really talked well. They communicated where she was all the time, and we respected them coming in here.

Q. How frustrating were the turnovers?
Lisa Bluder: Yeah, again, our fast break was there in the first half, and second half they did a great job of getting back. I think we had some turnovers trying to push it. But it’s hard. When you’ve been successful at it and been able to push, it’s hard to pull back the reins a little bit. But several times they were making a run, and I thought we had some untimely turnovers. But I never like turnovers, no matter when they are.

Q. Coach, preliminarily what is Wisconsin’s concern on Sunday?
Lisa Bluder: I watched them play Ohio State, but I was watching Ohio State. We’ve been fairly successful at Wisconsin. It’s been a good road place for us to win. I know they’ve won more games this year, I understand, than they have in the past in the Big Ten. So they’re obviously playing well.

Sam is from Wisconsin. That means a lot to us whenever we play in someone else’s home state. We want to make them proud that they left their home state and chose us. Megan Gustafson who is a recruit, obviously, that’s come in next year. You have Carly Mohns. We want to go up there and do well because it’s been a good recruiting area for us, so we certainly want to shine there.